The death of former Pike County Commission Ronnie Morgan on November 1, 2002, was met with sadness throughout the county.

Revenue Commission Curtis Blair said Morgan was an honest and honorable man and a dedicated commissioner to all Pike Countians.

“Ronnie came on the commission in 1977.  He worked well with Judge Ben Reeves and the other commissioners,” Blair said. “Ronnie was a hard worker and he was a man of his word. If he told you he would do something, you could count on it being done. He helped Pike County move ahead for 20 years. Ronnie was the kind of man you looked up to and wanted to be more like.”

Pike County Sheriff Russell Thomas agreed that Ronnie Morgan was a man of character and commitment. He loved his family and he was a man of strong faith.

“Ronnie was a good man, a gentleman, the kind of man we need more of,” Thomas said. “He was a dedicated commissioner. Whatever he did, he did right.”

Thomas said Morgan had the respect of all who knew him.

“And, that says a lot,” Thomas said. “He was a dedicated commissioner for about 20 years and not just to his district –the Needmore area —  but to all Pike Countians.”

Morgan was a farmer and that says a lot about him, too, Thomas said. “There’s just something special about a man who loves the land. He’s a hard worker and can be trusted to do what is right.

Ronnie farmed peanuts and raised cows. He was an active member of the Pike County Cattlemen. I’m proud to say that Ronnie Morgan was a friend.”

“We served together in the Army Reserve and anything that needed to be done, Ronnie was there to get it done,” Wright said. “He never complained about what had to be done. Ronnie was a good man and he had a good heart. He loved his family and he loved Pike County. And,, he was loved all around Pike County.

Funeral services for Ronnie Morgan will be at 11 a.m. Saturday in the Chapel of Dillard Funeral Home in Troy with Rev. Jim Powell officiating. 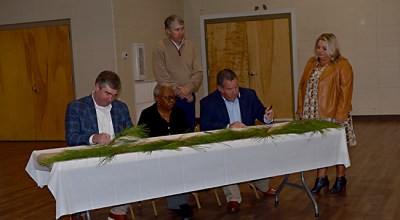