Just the other day, I “ran in” the Johnson Center for the Arts to snap a picture or two of the Art the Size of a Dollar Bill exhibit. A meeting was being held to the left of the entrance so I slipped around the other side, rode the elevator to the lower lever and back up again.

As I went out the front door, I heard Mack Gibson laughing.

I smiled. What was he telling? Mack always made me smile.

But, the first time I was aware of Mack Gibson’s thoughtfulness and generosity was many years ago. Anderson Peanuts had donated the aging, two-story building on College Street in Brundidge to the Brundidge Historical Society. It was the site where J.D. Johnston first made peanut butter in a crude wooden machine.

Being new in the “museum of local history” business, the BHS had few items of historical significance.

Mack and Mary brought an old wringer washing machine and donated it to our efforts. I shared the story of once running my hand through the ringer and, not knowing about an escape latch on the side, I ran it back through. Mack raised an eyebrow. Many times over the following years, he would raise an eyebrow and laugh.

Mack Gibson was a strong and dedicated patron of the arts. Back 15 years or more ago, the Brundidge Historical Society was ambitious enough to think we could host a weekend storytelling festival and that folks could come. Wiley White and I were sitting in her office at the Johnson Center mulling over a slogan for the festival

We both liked Mack’s painting of a mule by noted folk artist, Charlie Lucas, hanging on the wall.  But what did a mule behind a plow have to do with storytelling?  We looked at each other….. “Eveybody’s got a  tale!!!!”

We tossed the idea by Mack and he laughed, “What a great idea!”

Mack happily gave his permission to use the painting image and so did Charlie Lucas. And “Everybody’s got at tale!” was, and is, emblazoned on every T-shirt, every Pike Piddlers Storytelling Festival poster and all printed material.

Several years later, Mack and Mary donated Charlie Lucas’ original painting to the Pike Piddlers Storytelling Festival. It was a very generous and loving gift. But, that’s the way Mack and Mary Gibson are. Every time I look at Charlie Lucas’ painting of the mule, I think of Mack and Mary, hear his trademark laugh and see his big, grinning smile, because, just like that old mule, Mack Gibson always had a tale to tell and an idea to spin. His handprint is on the arts all over Pike County. He will be missed but not forgotten. 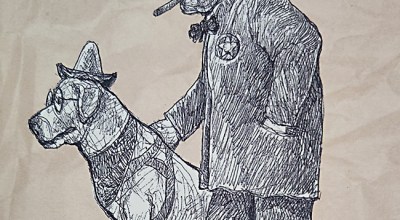