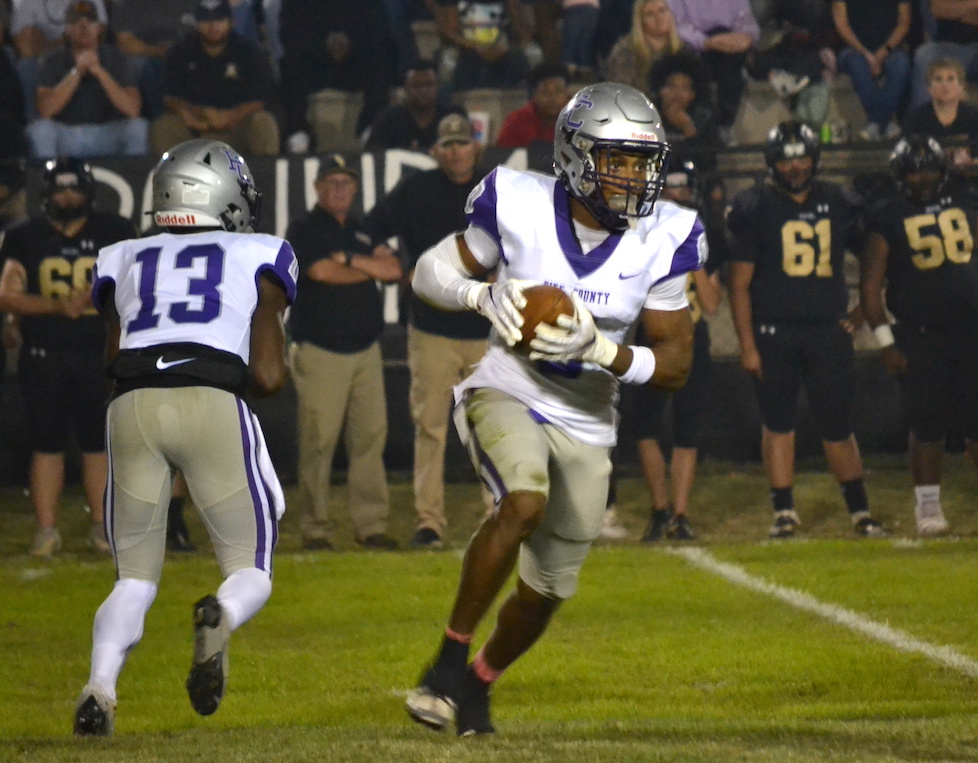 Pike County senior Ian Foster (0) had another big night for the Bulldogs in the playoffs. (Photo by Josh Boutwell)

The Pike County Bulldogs (7-3) made a resounding return to the Class 3A State Playoffs on Friday night by defeating Region 1 Champions Excel Panthers (9-2) by a score of 42-14 to advance to the second round.

“I thought we played very well tonight and we were very focused,” PCHS coach Mark Hurt said. “We’re just as good as a No. 1 seed. We played a No. 1 seed last week and I thought we outplayed them but we came up short on special teams and that cost us.

“The guys worked really hard this week and we played well in all phases of the game. It’s a good win for us.”

Pike County got on the scoreboard first with a 17-yard touchdown pass from Omari Barrow to Ian Foster, despite a pair of Panther defenders hanging all over the senior. Excel responded right back by returning the ensuing kickoff 69 yards to tie the score 7-7 with 4:08 left in the first quarter.

After Pike County’s offense started to sputter, the Bulldogs got back on track with a 51-yard touchdown run by Zay Carlisle with 2:29 left in the half to put PCHS up 14-7.

After the Pike County defense forced a turnover on downs, Foster turned heads again when he took a simple screen pass 60 yards for a touchdown, breaking four tackles on the way, with just three seconds left in the half to give PCHS a 21-7 lead at the break.

Pike County wasted no time getting back on the scoreboard in the fourth quarter as sophomore Nemo Williams scored on a 2-yard run to extend the lead to 28-7. A 65-yard pass from Barrow to Braylin Jackson set up the score.

Excel cut the lead to 28-14 on a 34-yard run but would not manage to find the end zone again. Pike County scored twice in the fourth quarter, on a 21-yard touchdown pass from Barrow to Chimarion Brown and a 1-yard touchdown run from Markelis Hobdy. Those scoring drives were nine plays and 15 plays, respectively.

In all, Pike County rolled up 438 yards of offense and held the Excel offense to 196 yards. Barrow completed 10-of-17 passes for 229 yards for three touchdowns and an interception, while Carlisle rushed for 146 yards and a touchdown on 18 carries. Foster caught six passes for 122 yards and two touchdowns along with two carries for 28 yards. Jackson caught three passes for 86 yards, as well.

On defense, senior defensive tackle Keith Williams was an absolute nightmare for the Panther offense, despite being hobbled with a leg injury. The elder Williams brother amassed six tackles, 3.5 tackles-for-loss and a 1.5 sacks. Hobdy also tallied nine tackles and two tackles-for-loss.

“I’m very proud of them,” Hurt emphasized. “We just have to continue to work and continue to believe and get better and better. That’s what we’ve been doing, getting better each week. We need to heal up now, because some of our guys are banged up, but we look forward to the next game.”