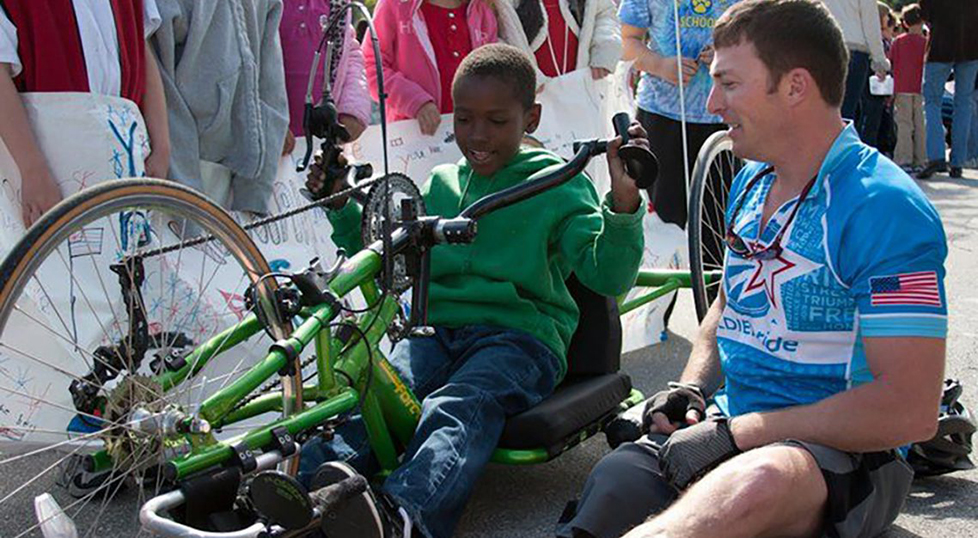 As a part of his rehabilitation, Murphy began competing in marathons, traveling across the world with the Achilles Freedom Team of Wounded Veterans. (Submitted photo)

Retired Army Staff Sgt. Luke Murphy, who was catastrophically wounded by an improvised explosive device in 2006 during his second tour of duty in Iraq, will bring his message of overcoming adversity to Troy University on Nov. 10 as a part of the University’s Helen Keller Lecture Series.

The lecture, which is free and open to the public, will take place at 10 a.m. in the Claudia Crosby Theater inside Smith Hall on the Troy Campus.

“On behalf of the Lecture Series Committee, we are excited to host the 25th Helen Keller Lecture Series and to welcome our speaker, Staff Sgt. Luke Murphy, to campus,” said Judy Robertson, committee chair. “Helen Keller demonstrated a humble approach to overcoming challenges during her lifetime and this same approach can be seen in Sgt. Murphy. His story is certain to impact all who attend in a positive way.”

As a member of the Army’s 101st Airborne division, based at Fort Campbell, Ky., Murphy was injured in 2006, shortly before completely his second tour of duty in Iraq. The explosion resulted in the loss of his right leg above the knee and seriously injured his left leg. He would undergo 32 surgeries and extensive physical therapy in the years following his injury.

Murphy was awarded several commendations including the Purple Heart and spent his last year as an active-duty soldier at Walter Reed Army Medical Center, medically retiring after 7 ½ years of service.

As part of his rehabilitation, Murphy began competing in marathons, traveling across the globe with the Achilles Freedom Team of Wounded Veterans. He was also recruited to serve on the National Campaign Team for the Wounded Warrior Project. NCT members share their stories to raise awareness for the most recently injured servicemen and women while serving as an example of the successes one can achieve after injury. He’s helped start philanthropies that allow wounded soldiers and service members to enjoy the outdoors, including hunting and fishing, through arrangements that accommodate their unique disabilities, and he recently became a recipient of a fully accessible, mortgage-free home through Home for Our Troops, an organization dedicated to building and donating specially adapted, custom homes nationwide for severely injured post-9/11 Veterans.

After his injury, Murphy returned to college, graduating with a degree in political science with a minor in communications from Florida State University in 2011. He went on to earn his real estate license and became a partner with Southern Land Realty, specializing in large tracts of acreage and farmland.

Murphy is a frequent keynote and motivational speaker and has spoken to Fortune 500 companies, thousands at the Pentagon and given college and university commencement addresses. His memoir, “Blasted by Adversity: The Making of a Wounded Warrior,” was published on Memorial Day in 2015, and has received a gold medal from the Florida Authors & Publishers Association’s President’s Book Awards.

The Helen Keller Lecture Series, which began in 1995 as the vision of Dr. and Mrs. Jack Hawkins, Jr., was initiated to call attention to and raise awareness of the challenges of those with physical limitations, particularly those affecting sensory ability. Through the years, the lecture has also provided the opportunity to highlight those who have devoted their careers to meeting the needs of the sensory impaired and to celebrate the collaborative efforts and partnerships of Troy University and the agencies and individuals who serve these special individuals.