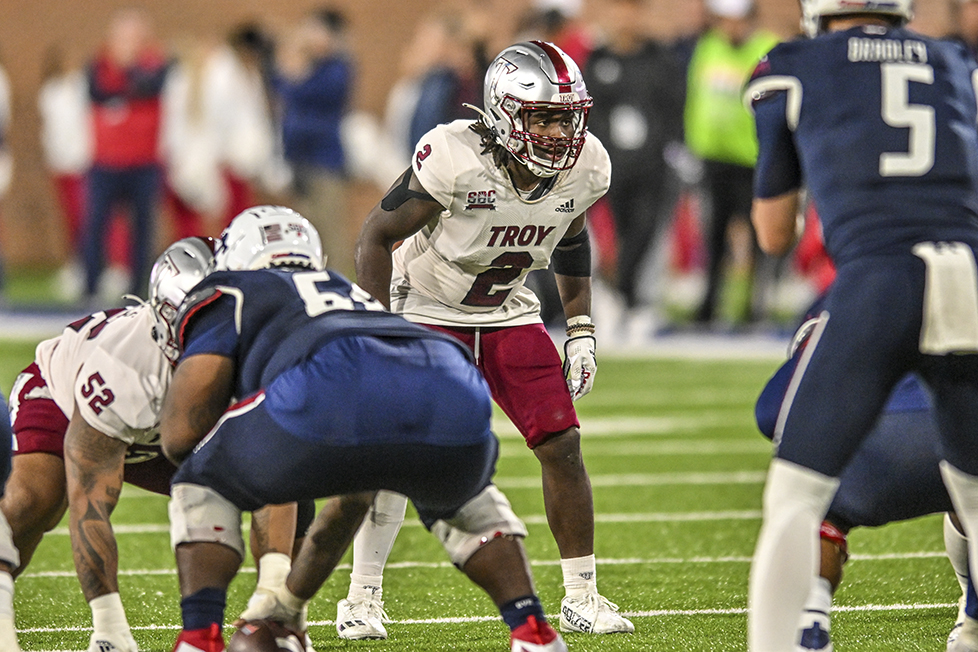 Carlton Martial (2) is nominated for yet another award. (Photo courtesy of Troy University Athletics)

On Wednesday it was announced that Troy senior Carlton Martial has added yet another nomination for a national award to his resume as a nominee for the 2022 Burlsworth Trophy.

The Burlsworth Trophy is presented to the nation’s top player who began their career as a walk-on. Each nominee must have started his first season of participation with an FBS football program without financial aid of any kind from the university’s athletic department.

Martial was a finalist for the award last season along with Georgia quarterback Stetson Bennett IV and Arkansas linebacker Grant Morgan, who ultimately won the award.

Martial is currently just 33 tackles shy of becoming the all-time total tackles leader in NCAA history. The Mobile linebacker is the only college football player at the FBS level to have 405, six interceptions and 41 tackles-for-loss in their career since at least 2000.

Martial has 71 tackles, 2.5 tackles-for-loss, 0.5 sack, one interception and two pass breakups on the season thus far. His 10.1 tackles per game ranks 14th in the country and is rated as the 15th overall linebacker by Pro Football Focus. Martial has been named to the Watch List for other national awards like the Chuck Bednarick Award, Butkus Award and Bronko Nagurski Award.

The Burlsworth Trophy will be presented on Dec. 5 at the Crystal Bridges Museum in Bentonville, Ark.