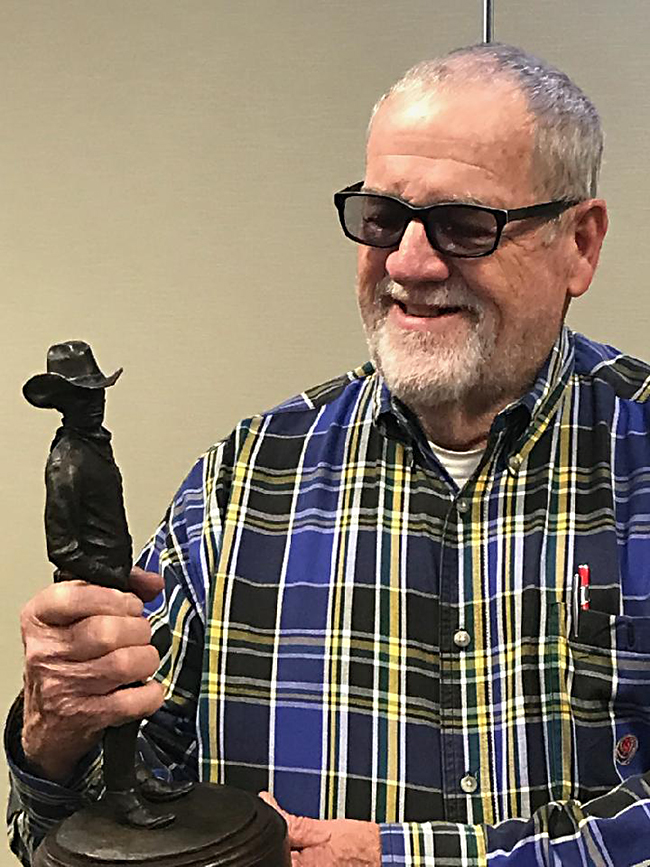 Contributed Photo BB Palmer was recently awarded the Will James Society’s “Big Enough Award.” Palmer has served on the society’s board and twice as its president.

BB Palmer of Troy has been honored as a longtime and outstanding member of the Will James Society with the awarding of the Society’s “Big Enough Award.”

The award was presented to Palmer at the Will James Society’s October “Georgia on My Mind Gather” in Cartersville, Georgia.

Palmer has served on the society’s board and twice as its president.

DeCarlo, said Palmer’s devotion and dedication to the goals and accomplishments of the Society surpass anything for which the Will James Society could ask.

DeCarlo said Palmer has always been a believer in the goals of the Society.

“In fact, he has helped create many of those goals with his forward thinking and futuristic ideas,” DeCarlo said. “Looking back on BB’s efforts and involvement, one can see where his influence and hard work have kept the Society going on the successful path it is currently on. BB is truly an inspiration and a joy for all who have worked with him and beside him as the Will James Society evolves and withstands the trials and tribulations that any organization faces in this uncertain world. He never lets himself get down or discouraged. He just keeps on finding ways to build a better organization that can withstand the challenges.”

As would be expected of BB Palmer, he responded to the recognition saying, “I guess they ran out of people so they gave it to ol’ BB.”

“I can’t say how much the ‘Big Enough Award’ means to me,” Palmer said. “Will James wrote a book titled,’ ‘Big Enough.’ It was about a little boy and horse that were born on the same day. They were both really small but they were big enough for most anything.”

Palmer said it’s that “can do” attitude that has and continues to make a difference in one’s daily life and in the communities and world in which we live.

“I’m thankful for the opportunity to be a part of the Will James Society,” Palmer said. “I will do my best to be deserving of the ‘Big Enough Award.’”