Trojans back to work after much-needed bye week 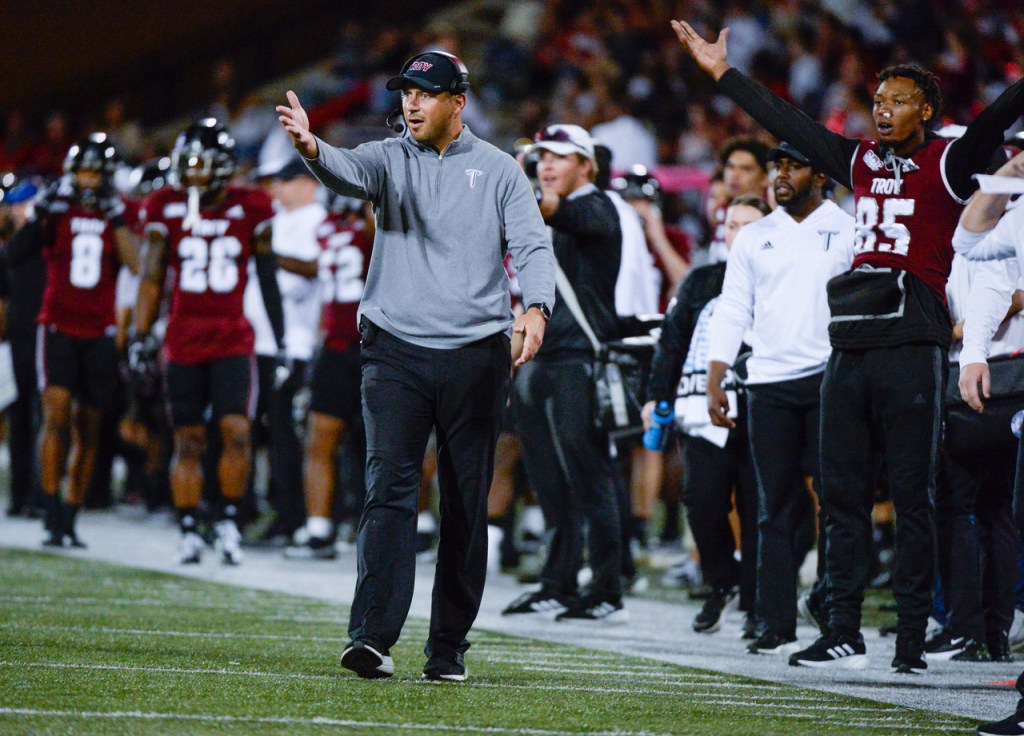 Trojans back to work after much-needed bye week

After eight consecutive weeks of football, the Troy Trojans got a much-needed break in the form of a bye week last week.

Now, the Trojans set their sights on Louisiana this Saturday for a long road trip.

“We’re excited about getting back into the flow of a game week,” Sumrall said. “We had a good week of work and hopefully some recovery was involved for our guys. We’re just focused on getting better in some areas we need to improve in and the unique things we’re about to face the next few weeks.”

Linebacker KJ Robertson said that the bye week came at just the right time for the Trojans.

“I loved it, I definitely cannot complain about it,” Robertson said. “Got to spend some time with my family and a bunch of the other guys. It’s always good to get some time away from football after grinding for 7-8 straight weeks.

“Coach Sumrall and the other coaches did a great job of letting us have a little bit of time off. We still practiced hard, that never changes, but it was good to get some time off and we definitely needed it. A bunch of guys were able to get treatment in and have some recovery time, too.”

On the injury front, Sumrall said that cornerback Caleb Ransaw is expected to play this Saturday after being out since the Western Kentucky game with a head/neck injury. Sumrall also confirmed that receiver Jabre Barber (ankle), defensive tackle Luis Medina (leg) and Jayden McDonald (leg) would all miss this week again.

Since Watson’s injury against Western Kentucky, both he and Jarret Doege have earned starts and both have replaced one another in different games, as well. Sumrall wasn’t about to reveal who will start on Saturday but he did confirm that both are getting reps with the first team offense in practices.

“Those same two guys will get the reps with the ones and the twos,” he said. “We’ll start one of them and he if he plays well, he’ll play the whole game and if he doesn’t play good, the other guy will play.”

Sumrall glowed about the way his quarterbacks have handled the starting situation this season.

“Those guys are awesome,” he emphasized. “After we played our last game, Jarret rode back with Gunnar and they hung out the weekend at Gunnar’s parents’ house.

“It’s really easy to coach when the two guys in such a critical position handle it the way they have. They both have played well and both had times where they could have played better, and they both know that.”

When asked if he’s ever been around two quarterbacks that have handled a competition as positively as Watson and Doege have, he had to look back to his playing days.

“(Former Kentucky quarterbacks) Jared Lorenzen and Shane Boyd,” he said. “Jared lost the job and then he got it back and they were always extremely supportive of each other. It’s such a unique position and everyone wants to be the man.

“I can’t say that I have been around two guys that have handled it with such class and character (as Watson and Doege) in a really long time. They’re great teammates and they support each other well and our entire team supports both of those guys. I love both of them and want them both to be successful. I could not have asked for two guys that could handle the situation any better than they have.”