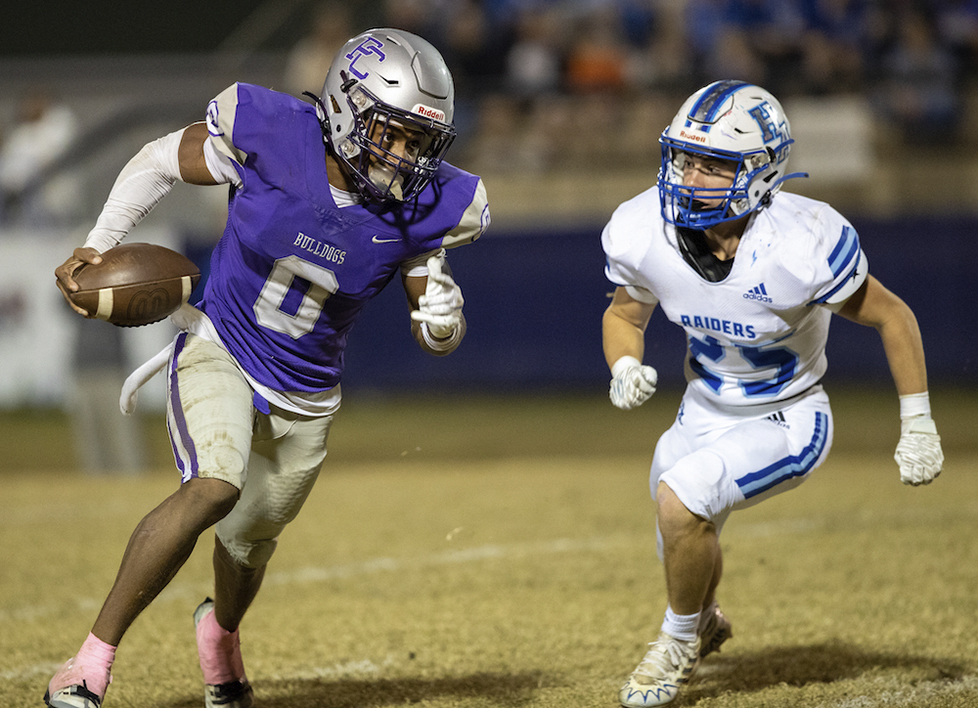 Bulldog Stadium was rowdy in a playoff atmosphere on Friday night for the Pike County Bulldogs’ (6-3, 5-3) Class 3A, Region 2 clash with the Houston Academy Raiders (10-0, 8-0) to finish off the 2022 regular season.

With both Pike County and Houston Academy coming into the game with playoff spots clinched, the Bulldogs were fighting for a better seed in the first round. Unfortunately for PCHS, a pair of special teams miscues would be the difference in the game.

In the fourth quarter, with the score tied 14-14, Houston Academy’s Charles Knowles blocked a Pike County punt and raced 32 yards for a touchdown to put the Raiders up 21-14.

Making things worse for the Bulldogs, on Pike County’s ensuing possession, quarterback Omari Barrow went down with a hip injury. Senior athlete Ian Foster stepped into his place and, facing a third-and-10 in Raider territory, Foster broke a pair tackles and raced 46 yards for a touchdown to cut the lead to 21-20. Another special teams mistake caught up to the Bulldogs, however, as the PAT was blocked securing the lead for the Raiders.

Pike County got on the scoreboard first in the game when Barrow heaved a 73-yard touchdown pass to Foster in the first quarter. The PAT was no good but PCHS took a 6-0 lead into the second quarter and eventually would maintain that lead going into halftime.

Pike County opened the third quarter with a 5-play scoring drive after the Raiders muffed the opening kickoff. Sophomore running back Nemo Williams capped off the drive with a 5-yard touchdown run and Kameron Christian converted a two-point try to give Pike County a 14-0 lead.

Houston Academy answered, though, when running back John Daughtry capped off an 8-play, 66-yard drive with a 2-yard touchdown run. The PAT cut the PCHS lead to 14-7.

Late in the third quarter, Pike County seemed poised to completely take over the game as the Bulldogs marched on a 12-play, 76-yard drive inside the Raider 3-yard line. A mistake would prove costly, though, when a Bulldog fumble on first-and-goal was scooped up by Houston Academy’s Rodwick Jackson and raced 98 yards for the tying touchdown.

Despite a slew of injuries across the Pike County offensive line, the Bulldogs rushed for 213 yards against Houston Academy. PCHS played with a pair of freshmen on the offense line, as well. The Bulldogs earned 426 total yards – 213 passing and 213 rushing – in a near perfectly balanced offensive game plan. Unfortunately, Pike County also turned the ball over three times and had two kicks blocked.

Pike County’s season is just getting started now, though, as the Bulldogs hit the road to face Region 1 Champion Excel in the opening round of the Class 3A State Playoffs next Friday night. It will be the first time PCHS and Excel have ever played on the gridiron.