Donna Kidd blessed to serve others in need 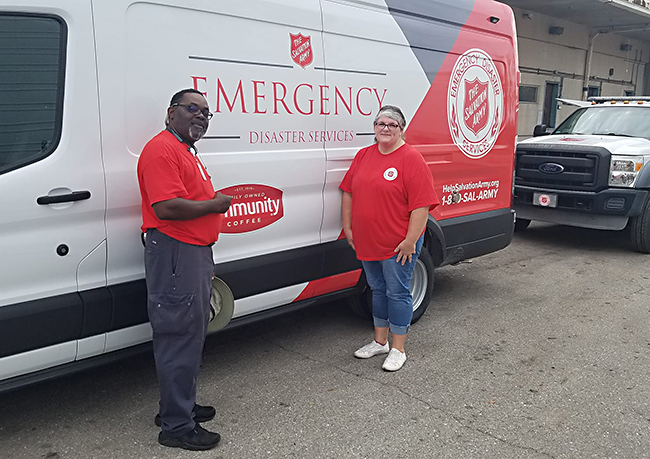 Donna Kidd could never have imagined that she would walk into a war zone in usually serene Florida.

But, that’s where she found herself and what she experienced will not be forgotten.

Kidd, the director of the Pike County Salvation Army Service Center in Troy, was more than willing to accept the challenges of responding to the needs of the aftermath of Hurricane Ian that made landfall September, 28 in the Fort Myers area as a Category 4 hurricane.

The ferocious 150-mph winds pushed ashore water from the Gulf of Mexico that tore through homes and businesses along the coast.

“I had seen the devastation on TV and read about it in the newspaper, but I was not prepared for what I saw,” Kidd said. “It was as close to a war zone as I could imagine.”

Kidd was in Fort Myers as a member of a Salvation Army team that would operate a canteen to serve food to those who were left homeless in the wake of the hurricane.

“When the beach area was opened and we were able to go in and start feeding, the devastation blew my mind,” Kidd said. “Homes had been blown off their foundations, many across streets.  Some homes were just studs. At one site, several hundred mobile homes were completely destroyed and people were living in tents, under carports and many just on mattresses.”

Kidd said cars were crunched like paper sacks and boats, including pontoons, were in trees.

“One lady said, when she was flying back home, what she saw took her breath,” Kidd said. “She said the devastation was more than she could stand.”

On the ground, Kidd said there were mountains of debris that had once been homes and treasured things, gone and could not be replaced.

“The sounds of the dump trucks were deafening as the grabbers lifted the debris to be hauled away,” Kidd said.  “The physical loss was devastating and the people were heartbroken.

“People were at a loss as how to put their lives back together again. Many of them were traumatized because they found that their full-coverage insurance didn’t cover flood damage.”

Kidd said large numbers of hurricane victims were hungry and so appreciative of the meals that were prepared by the Alabama Southern Baptist Association and served by the Salvation Army.

Kidd said she was blessed to be able to be a part of serving food to the victims of Ian.

“And I was blessed to be able to hear their stories and to pray with them,” she said. “They needed someone to listen and to show love to them. It was an experience that I’ll never forget and a loss and heartbreak that will hopefully not be again.”