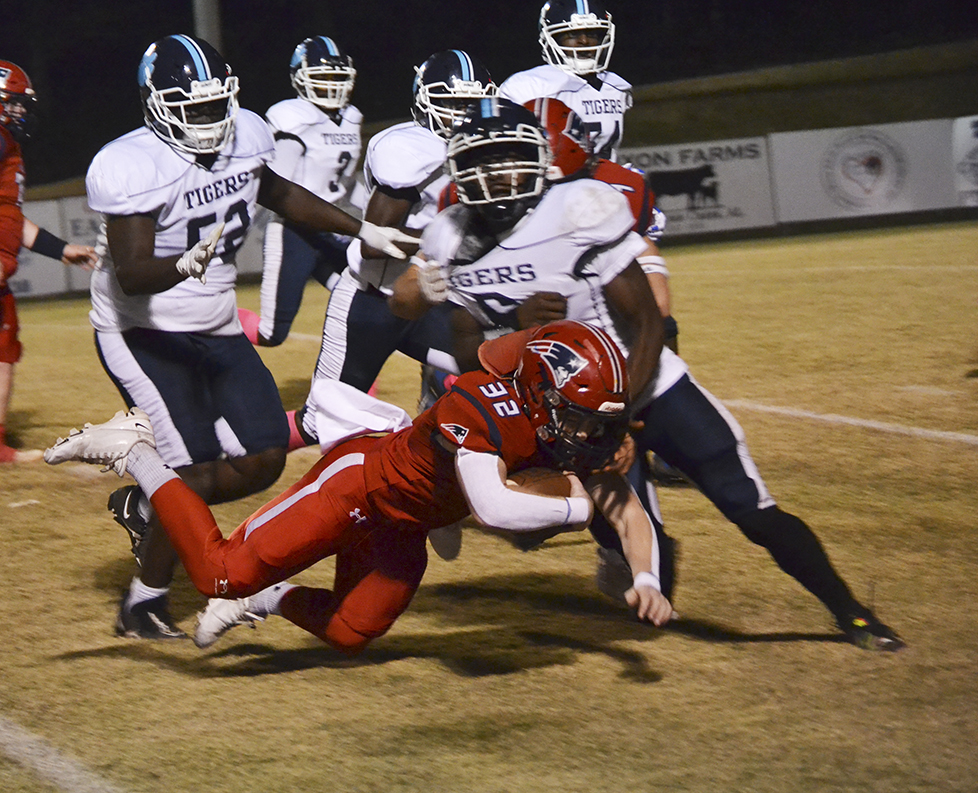 The Pike Liberal Arts Patriots (3-6) finished off year one in the Alabama High School Athletic Association (AHSAA) with a bang, dominating the Calhoun Tigers (1-9) by a score of 50-6 on Thursday night.

The Patriots held a 21-6 lead at halftime but ran away with the game in the second half, outscoring Calhoun 29-0 in the third and fourth quarters.

“We came out and executed early on in the game and then had a few penalties go against us and it kind of set us back a little bit going into halftime,” PLAS coach Charlie Scofield said. “I crawled them like I normally do when we don’t perform like we should and I was really proud of the way they responded in the second half. It wasn’t flawless but it was a really good performance and I’m really proud of the way they played.”

Pike got on the scoreboard first with a 6-yard touchdown pass from Dawson Bradford to his brother KC Bradford early in the first quarter to put PLAS up 7-0. Pike scored again on a 4-yard touchdown run from Davis Kilcrease to give the Patriots a 14-0 lead going into the second quarter.

Kilcrease scored again on a 13-yard touchdown run late in the second quarter to extend the lead to 21-0. Calhoun managed to keep the halftime score within reach on a 20-yard touchdown run as time expired in the half to cut the Patriot lead to 20-6 following a failed PAT.

In the fourth quarter, Pike defensive end Corey Jones sacked a Calhoun quarterback, forcing a fumble, and Kilcrease scooped the ball up and raced 35 yards for another touchdown to extend the lead to 41-6.

With the Patriots celebrating Senior Night, PLAS pulled out some trickery to get another senior in the end zone late in the fourth. Receiver Kade Brookings took a reverse and proceeded to heave a 58-yard touchdown pass to senior kicker/linebacker/tight end Cade Renfroe. Brookings then faked the PAT and threw a two-point conversion to Jones – another senior – to give PLAS the 50-6 win.

PLAS rolled up 364 yards of offense against Calhoun and held the Tigers to just 127 total yards. While PLAS did turn the ball over twice, the Patriot defense also forced four turnovers of their own.

Kilcrease led the Pike offense with 111 yards and three touchdowns on 15 carries, while also hauling in one catch for 10 yards. On defense he also amassed six tackles, two tackles-for-loss, one sack and a fumble return for a touchdown giving him five total scores on the night.

The Patriot football program has epitomized “ups and downs” of football over the last three years. The program won back-to-back AISA State Championships but also had five different head coaches over the span of less than a year, along with a number of starters that departed the program. The PLAS senior class was a part of it all.

“These seniors have gone through a great deal of adversity, specifically, even just this year,” Scofield emphasized. “There were a lot of ups for them and unfortunately a lot of downs, too. They’ve been a vital part of this program for a long time.

“There are a lot of other guys we still have that we’ll have to lean on next year that got a lot of experience this season. I’m just really proud of this group.”