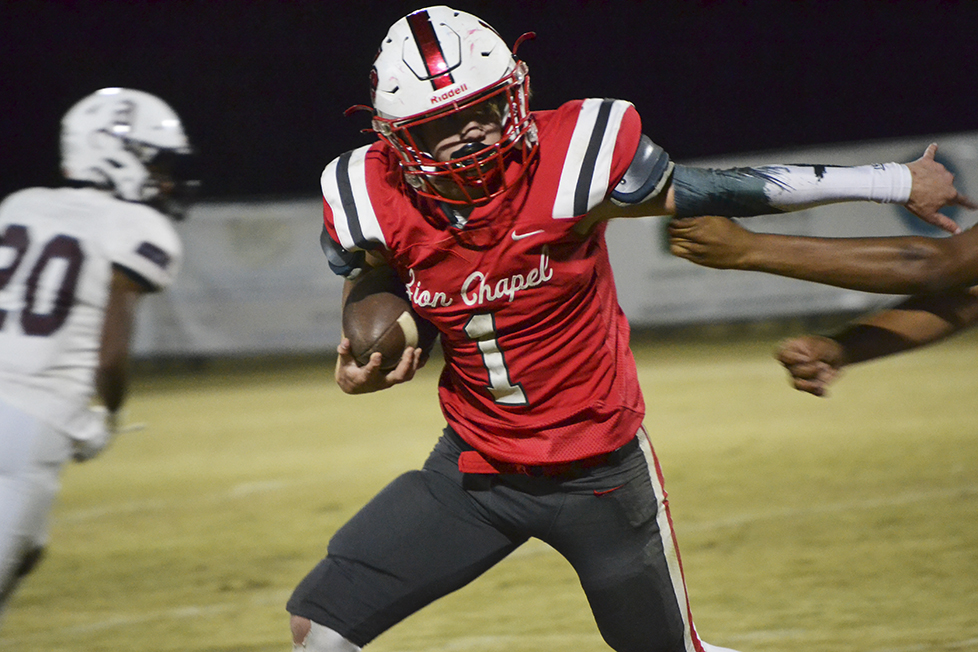 With the score tied 14-14 midway through the fourth quarter, Abbeville had the ball deep in Zion Chapel territory with a chance to go ahead. After a penalty and a sack pushed Abbeville back, the Rebels forced a fourth down attempt. Zion Chapel’s Jackson Adcock batted down a desperation heave to force a turnover on downs, however.

Instead of kicking it back to Abbeville, the Rebels went for an onside kick instead, and Zion Chapel’s Joeb Bradley covered the ball after it bounced off a Yellow Jacket player’s knee.

The Rebels then marched on a 12-play, 70-yard drive that ate up more than four minutes of clock. Quarterback Morgan Sanders capped off the drive with a 5-yard touchdown run to put Zion Chapel ahead 20-16 with 22 seconds left. Micah Fuller added a two-point conversion to extend the lead to 22-16.

Zion Chapel’s Shaun Smith sacked Abbeville quarterback Christopher Billins on the Yellow Jackets’ first play on the ensuing drive and then John Foster Hamm dragged Billins down as he scrambled with time expiring, to secure the Rebel win.

“It feels good,” Zion Chapel coach Cody Keene said after the game. “Week nine our guys are still out there competing, so that means they’ve bought into the things we’re preaching each and every day about being a hard-nosed program, coming off the ball and hitting people in the mouth. That was a hell of team win tonight.”

The win marked Zion Chapel’s first ever win over Abbeville and the Rebels’ first time with more than two region wins in a season since 2019. Keene was most proud of the way his team fought through adversity that has spelled doom for the Rebels in years past.

“I know if we hadn’t been doing the things we’ve been doing (this year), what happened in the past when a bad play late in the game like that happens, when you have a chance to win, would have happened again,” he said. “Hats off to our kids and coaching staff. They did a fantastic job of hanging with it and that’s all I want them to do; just believe in what we’re doing and hang in there and we’ll be fine.”

Neither team managed to find the end-zone in the first quarter but Abbeville’s Wauntavious Conley scored on an 11-yard run with 3:46 left in the second quarter to put the Yellow Jackets ahead 6-0. Zion Chapel answered right back, however, as Joseph Legear took a reverse and threw a 3-yard touchdown pass to Adcock with 26 seconds left in the half. The PAT was no good and the score was tied 6-6 at halftime.

Abbeville retook the lead with 7:52 left in the third quarter on an 18-yard touchdown run by Conley. The two-point conversion gave the Yellow Jackets a 14-6 lead. Zion Chapel opened the fourth quarter with a 14-play drive capped off by a 6-yard touchdown run from Sanders. Sanders then bulled his way into the end-zone again, running through an Abbeville defender, for the two-point conversion to tie the score 14-14 with 10:45 left in the game.

The Rebels rolled up 260 yards rushing against Abbeville and 305 total yards, while playing keep away with the football holding the ball for 30 minutes of game time. Abbeville tallied 327 yards of total offense but also had two turnovers on the night.

Both Sanders and Fuller eclipsed 100 yards rushing for Zion Chapel. Sanders rushed for 149 yards and two touchdowns on 36 carries, while he also completed 2-of-3 passes for 42 yards. Fuller rushed for 126 yards on 21 carries. Adcock caught two passes for 24 yards and a touchdown.

Bradley and Brayden Benbow led the Zion Chapel defense with seven tackles each, while Fuller had three tackles and a sack. Benbow also recorded a tackle-for-loss and a fumble recovery. Adcock also earned an interception on defense.

Zion Chapel will look to close out 2022 by putting another check in the win column on “Senior Day” next week against Reeltown at home.