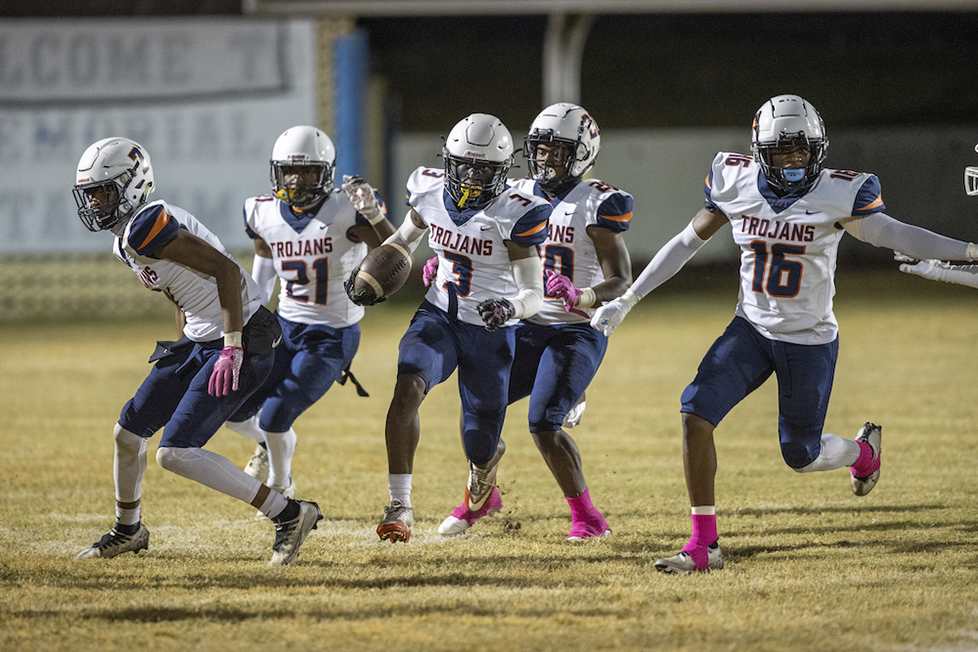 SELMA, AL – As Charles Henderson High Head Coach Quinn Hambrite was receiving hugs from his two little girls immediately after Friday’s 37-22 win over Selma, he was thankful and relieved with a regular-season-ending win, but he knew also that his team must play better once the playoffs begin in two weeks.

CHHS is off next Friday in the final evening of AHSAA regular season play, and will host the first round of the Class 5A playoffs on Nov. 4, against an opponent from Region 1. The Trojans will play the fourth seed of that region, which appears to be Williamson or Vigor of the Mobile area.

CHHS was in control much of the game against the Saints, but penalties and two turnovers were not a good look for the Trojans. Coach Hambrite said his team must clean that up before the first round of the playoffs.

“We cannot defeat ourselves,” said Coach Hambrite. “There are so many times when we are backing ourselves up and putting us in a bind. The number one objective for the next two weeks is to clean ourselves up, clean our penalties up and sharpen ourselves. Before we think about playing anybody, we have to sharpen ourselves. In order to win and compete in the playoffs, we can’t beat ourselves. Selma is a great team coached by an excellent coach in Coach (Willie) Gandy, and he is doing an excellent job.”

CHHS got on the board first when junior running back Zach Coleman took it in from 20 yards out for the touchdown and Nik Peerson kicked the extra point for a 7-0 lead with 2:39 remaining in the first quarter.

Sophomore running back Antonio Frazier put the Trojans ahead on their next possession on a 7-yard carry, and upon lining up for the extra point, the snap went directly to Will Templin who took it in for a two-point conversion and a 15-0 lead.

Selma scored on a 60-yard drive on their next series, with quarterback Marcus Walton fighting his way in for a TD, and also added a two-point conversion to cut the lead to 15-8.

CHHS junior quarterback Parker Adams scored on a 10-yard touchdown run with 4:24 left in the first half and Peerson kicked the PAT to put the Trojans ahead 22-8, which was the score at halftime.

The Saints scored again on a 13-yard carry by Walton to make the score 28-16, but the Trojans got on the board again to close out the third quarter on a 3-yard TD run by Coleman and a 34-16 advantage.

Selma scored their final touchdown with 11:45 remaining in the contest on a 72-yard run by Dakari Nelson to cut the lead to 34-22.

The final score of the evening came on a 37-yard field goal by Peerson with 4:58 left in the contest.

In unofficial stats, Coleman led CHHS in rushing with 77 yards on 12 carries and two touchdowns, Frazier had 21 yards rushing and a TD, while Adams rushed for 22 yards and a TD and passing for 177 yards and one touchdown.

CHHS will be at home on Friday, Nov. 4, for the first round of the Class 5A playoffs against an opponent to be determined.