Troy beats South Alabama in the Battle for the Belt 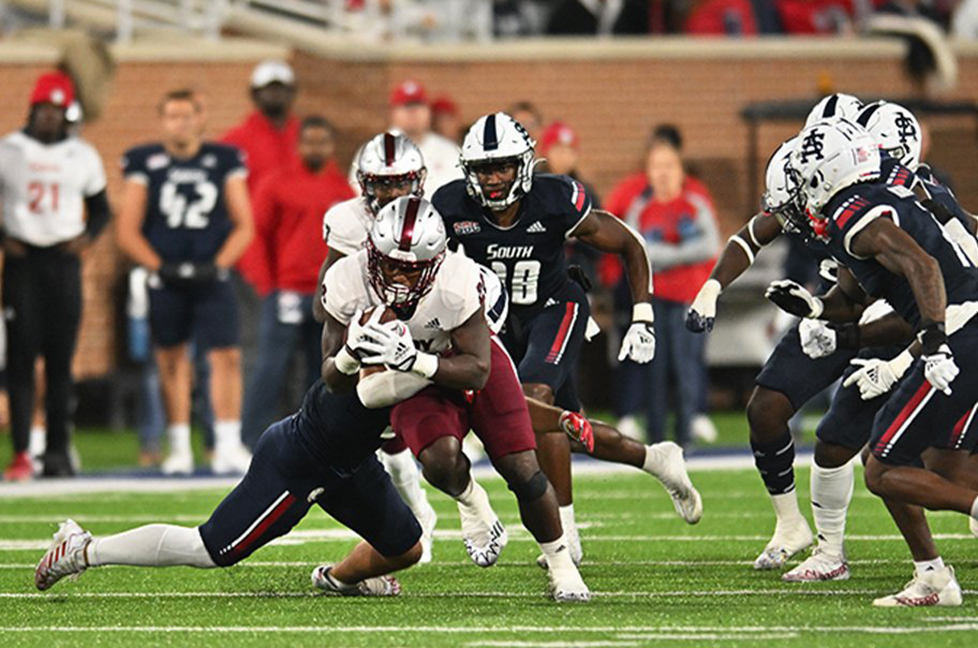 With Troy hanging on to a slim 7-6 lead, kicker Brooks Buce drilled a 51-yard field goal with 7:35 left in the game to extend Troy’s lead to 10-6. On South Alabama’s ensuing drive, defensive end TJ Jackson earned a tackle-for-loss and laid a vicious hit on USA quarterback Carter Bradley to force an incompletion on third down in back-to-back plays.

Jackson was noticeably limping in between snaps due to an ankle injury he suffered earlier in the second half. Despite that, the Sun Belt’s tackle-for-loss leader ended the game with three tackles, two tackles-for-loss, a sack and a quarterback hurry.

The Troy running game then finished off the game for the second consecutive week, milking away the much of the final four minutes, picking up first downs and running the clock. Troy still had to punt with 19 seconds left, but the Trojan defense stood tall as the Jaguars attempted to get back into scoring possession as time expired.

Troy running back DK Billingsley got the scoring started on the day with a 5-yard touchdown run with 14:56 left in the first half to put Troy up 7-0 after both teams were unable to score in the first quarter. Billingsley’s touchdown capped off a 10-play scoring drive and would be the only touchdown scored in the rivalry game.

Despite the Troy defense dominating the first half, South Alabama managed to get into field goal range and USA’s Diego Guajardo drilled a 41-yard field goal as time expired to cut Troy’s lead to 7-3 at halftime.

Neither team was able to score in the third quarter but Guajardo drilled a 32-yarder with 10:27 left in the game to cut Troy’s lead to 7-6. Buce’s 51-yard field goal was the only other score.

Jarret Doege earned his second start of the season for Troy but struggled to move the ball and was replaced in the second half by Gunnar Watson. Doege finished 10-of-15 passing for 84 yards and an interception, while Watson was 4-for-4 for 54 yards.

The Trojan running game managed 128 yards rushing but actually rushed for more than 150 yards if sack yardage isn’t counted. DK Billingsley led the Troy running game with 86 yards and a touchdown on 19 carries, while Kimani Vidal added 64 yards on 17 carries. 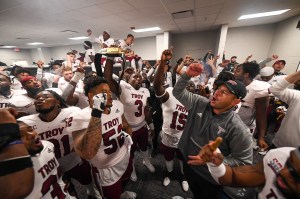 The Troy offense netted 266 yards and the Trojan defense held USA to just 246 yards with only 31 yards rushing. Troy struggled to convert third downs, converting just 1-of-12 third downs but also converted both fourth down attempts.

“We just kept fighting,” Troy coach Jon Sumrall said. “We had a lot of guys out coming into the game and a lot of guys not available late in the game. We didn’t play great football tonight.

“Offensively, I’m livid we couldn’t score more points but we’re going to get better. We have a bunch of fighters and I’m proud of the fight we showed.”

While the offensive struggles were frustrating, Sumrall praised his defense.

“Hats off to our kids on defense,” he said. “They have been the backbone of our team all year and all they do is compete. If you told me (coming in) we would hold their offense to six points, I would feel really good about that.”

The win puts Troy in first place in the West Division of the Sun Belt Conference but Sumrall emphasized Troy had a ways to go to start thinking about championships. The win also makes Troy bowl eligible for the first time since 2018. Troy is off next week but returns to action back on the road on Nov. 5 against Louisiana for another conference matchup.