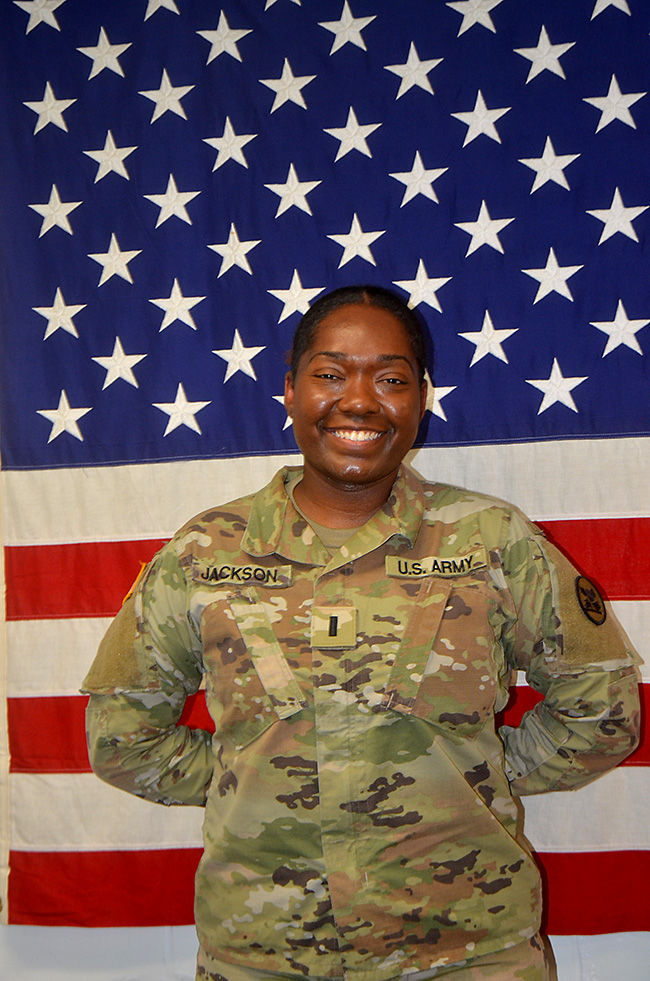 Jackson said she is honored to have been selected and to be in command of such an outstanding company.

In addressing the soldiers she is to lead, Jackson said, “You guys have shown me the importance of the people who stand to my left and to my right. I am excited for this opportunity and look forward to the many great things we accomplish together.

“I am also looking forward to the opportunities and challenges that come with being in command. I will depend on my education, my experience in the ROTC and the Army National Guard and the support of the 117th as I assume command.”

Upon completion of training, Jackson arrived at the 117th FSC in Troy, in 2012.

“I was eager to further develop my new skills of machinery and welding and obtain a college degree,” she said.

In 2013, Jackson competed for a ROTC contract at Troy University and became a cadet.

“As a cadet, I prepared for the responsibilities I would inherit as an officer and sought mentorship from the NCOs who motivated me to be my best,” she said.

In 2016, Jackson successfully completed the ROTC program and was commissioned into the Alabama Army National Guard with a degree in business administration. She was inspired to join the national guard by her grandfather, SGT. Matthew Jordan Sr. a Vietnam veteran, and Retired CSM Anthony Johnson, high school JROTC instructor.

From 2017-2021, Jackson moved through multiple positions in her company, serving and acquiring 10 years of logistical operation experience that led to her being selected as the incoming Commander of the 117th Forward Support Company.

Jackson’s Change of Command Ceremony took place October 15, 2022 and she assumed the responsibility of 85 Soldiers.

“To be selected as the commander and be given the opportunity to lead soldiers is a great responsibility but I am excited to lead,” Jackson said. “I’m excited to be with a great group of soldiers who have been another family to me. I’m also excited to be given this purpose of making a difference, helping soldiers accomplish their goals in and out of uniform, and serving my country and my community.”