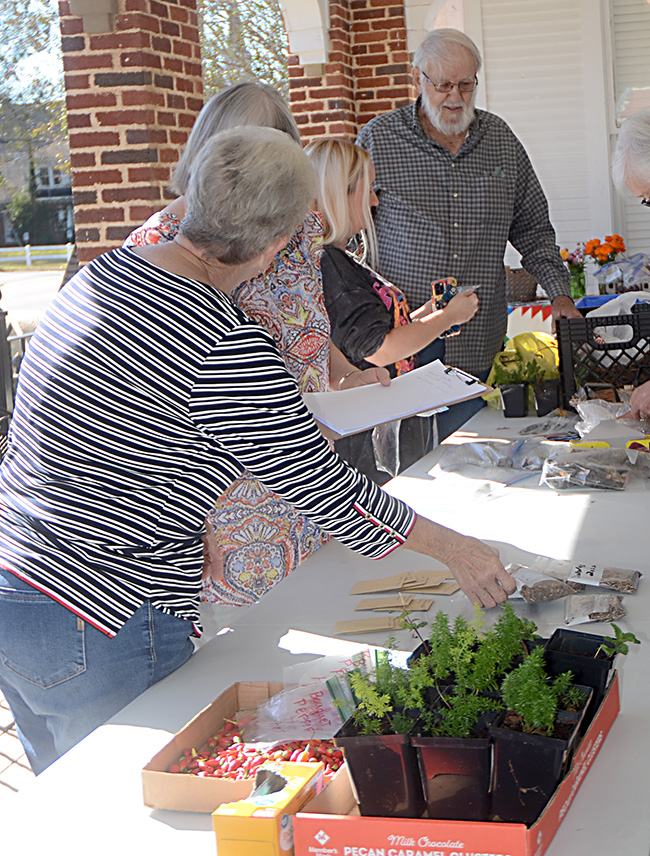 “The seed swap was so much fun and we learned a lot” said Theresa Trawick, library director. “We had a good group of gardeners and a lot of seeds to swap and we all took home seeds to plant and nurture.”

“Each heirloom variety is a little piece of living history,” Trawick said. “Heirloom seeds tell the story of the people that grew them. Keeping these seeds alive maintains a connection to cultural roots, ancestral ways and the earth.”

The heirloom seeds at Tupper’s swap were as varied as they were plentiful -gomphrena, sunflower, fox ferns, luffa, carrots, asparagus, celery, kale, beans, okra, tomatoes, celosia, pepper seeds, corn and cowpeas and they were quickly scooped up.

Donald Reddock said the cowpeas he brought to swap have been growing in and around the county for more than 100 years and probably originated in the Monticello community.  The tall- growing plants don’t require a lot of “urging” and are some of the best pot-licker peas that can be found and also make delicious bean soup.

Reddock said cowpeas are among the seeds that are rooted in farmlands of the rural South.

“Planting heirloom seeds is a way we can preserve the culture of our ancestors and, at the same time, put good tasting vegetables on our tables,” he said.

Smothers agreed that the seed swap was a lot of fun and a huge success.

“We had a good group of neighbors come out with so many seeds, bulbs and potted up plant starts,” Smothers said. “The energy of the group is always great when you get people together with a shared passion about something.  People were happy to share their garden goods along with their garden wisdom, too.  There were lots of great conversations going and several contributions to the seed library were made.  We want to thank Theresa and the Tupper Lightfoot Memorial Library for hosting u.  We look forward to more events in the future.”