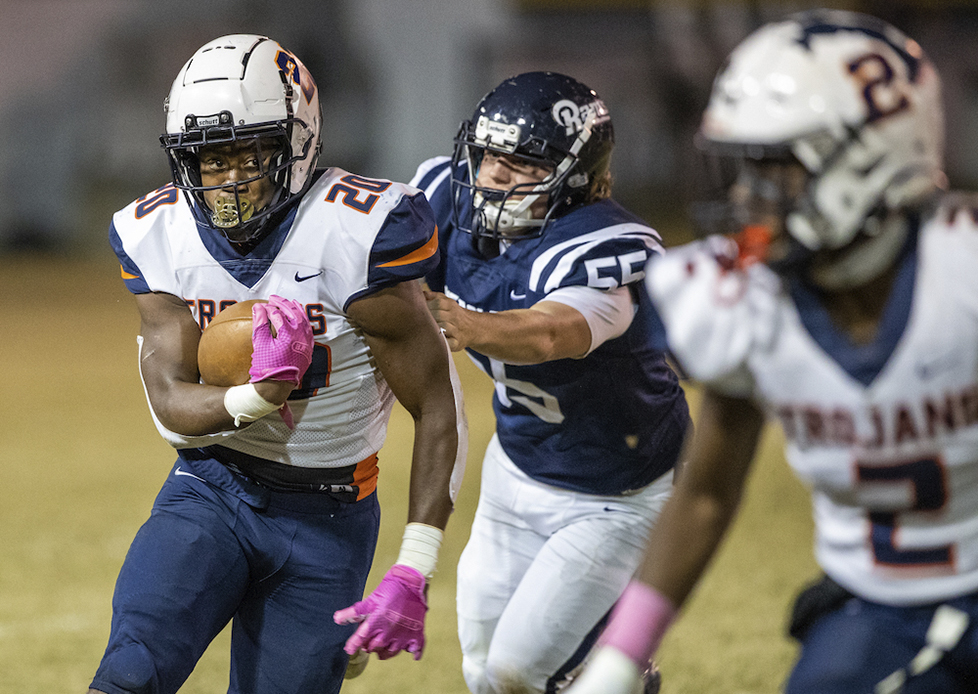 HEADLAND, AL – It may have been ugly, but it was a win.

Despite being penalized 18 times on the night, Charles Henderson High managed to find a way to win 31-13 in a Class 5A, Region 2 fistfight at J.J. Yarborough Stadium in Headland Friday evening.

A drive that symbolized the evening came to open the fourth quarter when the Trojans reached the Rams 15 yard line, but had two touchdown passes called back on penalties, and two plays later faced fourth-and-77 from their own 21, before punting.

The Trojans had a number of first downs and big plays – including multiple touchdowns – negated by penalties throughout the night.

Improving to 7-1 on the season and 5-0 in Class 5A, Region 2, the Trojans are on the road next Friday at Selma to conclude their regular season before the first round of the AHSAA playoffs.

The Trojans and Rams were locked at 0-0 after the first quarter, but scored on their first possession of the second stanza when junior quarterback Parker Adams hit Jywon Boyd on a 25-yard touchdown pass play. Nik Peerson kicked the extra point for a 7-0 lead with 10:13 remaining in the first half.

Headland tied the score at 7-7 on a 3-yard TD carry by quarterback Jaxon Williams.

CHHS got the ball with 0:17 remaining in the half and needed only two plays to score as Adams completed a beautiful 40-yard pass to Boyd down the right sideline, as Boyd out-jumped two defenders, came down and danced around them the final two yards for the TD and a 14-7 halftime lead.

The Trojans opened the second half with a touchdown scoring drive when junior running back Zach Coleman went in from 1 yard out and the kick by Peerson was good for a 21-7 lead.

Peerson added a 32 yard field goal with 3:31 remaining in the third period for a 24-7 advantage.

The Trojans then moved to the Headland 15, and on second and 13 from the 18 Adams found Boyd in the end zone but the play was called back for a penalty. Two plays later the two connected again for another touchdown, but that TD was also called back.

It was not until 4:15 remaining in the game that CHHS pulled away on a 30-yard touchdown run by Adams up the middle for a 31-13 lead which held up to be the final.

Unofficial stats had Adams with 142 yards passing and two touchdowns to Boyd as he completed 12 of 21, while rushing for 40 yards and a TD on three carries.

CHHS is at Selma next Friday to conclude the regular season.