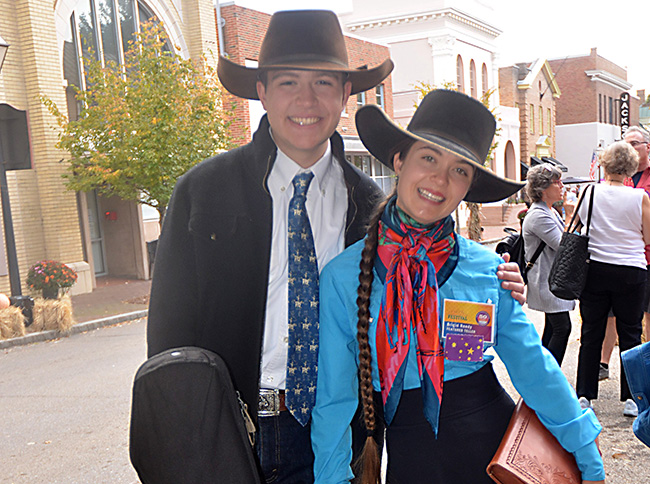 On a bright, but nippy Saturday morning in Jonesborough, Tennessee, storyteller Kathryn Tucker Windham shared with the overflowing gathering of story lovers how she had shopped for a coffin and finally decided on a pine box, which was lovingly crafted for her. She told about the comb concert she had planned for her funeral and how “I’ll Fly Away” will be her swan song.

She closed her storytelling at the National Storytelling Festival in 2009 with a simple request, “Will y’all sing ‘I’ll Fly Away’ with me?

A thousand voices obliged her. There was not a dry eye in the tent.

Kathryn Windham was and always will be Alabama’s Legendary Storyteller.  She died on June 12, 2011 at the age of 93. Jonesborough remembers her.

This year, 2022 the National Storytelling Festival in Jonesborough celebrated its 50th year of telling stories October 7-9.

The milestone event was a time for looking back and moving forward, both in the oral tradition.

The Jonesborough storytelling tradition had its beginning on a warm, sunny October day in 1973.

A tall, gangly man from Beech Mountain in North Carolina “called’ Ray Hicks told his now famous Jack tales from the back of an old farm wagon. Perhaps as many as 60 people were there for what was the beginning of the American storytelling renaissance.

The National Storytelling Festival was the brainchild of Jimmy Neil Smith, whose inspiration came from Jerry Clower, a country comedian whose humor made folks from near and far fall in love with the rural South.

Over the years, people began to make annual pilgrimages to Tennessee’s oldest town for the National Storytelling Festival. They came from all across America and beyond. They became a part of the revival of the art that is as old as man himself.

And, that’s what Jonesborough offers each October, but not just a good story – a trailer truckload of good stories told by masters of their craft. And, they come, those who love storytelling. They come thousands strong.

They speak in the dialect of the Yankee doodles, with the twang of the Midwesterners and the drawl of the folks from Dixie land and some in languages, perhaps, foreign to many. But, they all listen with the same eager ears and they all have a great appreciation of and love for storytelling.

A lady from Cincinnati said she drives down to J’boro each year to see her favorite tellers and to seek new favorites and add them to her list.

A man from Pennsylvania comes to the National Storytelling Festival each year for R&R.’

“When you are here, the whole world is right,” he said. “You come into these huge, white tents packed with strangers and, in no time, we become one, woven together with a storyline.”

A Kentuckian said he is “just a sentimental old fool.”

“I’ve been coming to Jonesborough so long this place is a part of my soul,” he said.

A young man from “around New York” said he didn’t want to come to the storytelling festival.

“Now, I don’t want to go back home,” he said. “Next time, I’ll bring friends with me. I may have to twist their arms to get them here but they will thank me for it.”

At Jonesborough, you are among the masters of storytellers, a lady from Tennessee said. “I could sit and listen to each one of them all day long. But, because of time constraints, I didn’t get to hear all of tellers and because of that, so know that I’m leaving having missed some wonderful stories. But, as long as I’m able, I’ll keep coming because there’s no place like Jonesborough, Tennessee on an early October weekend. Experience it.”