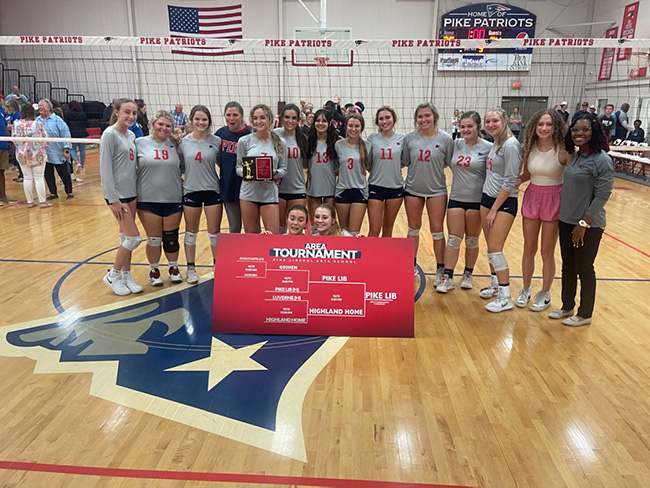 The Pike Liberal Arts Patriots capped off year one in the Alabama High School Athletic Association (AHSAA) with a Class 2A, Area 5 Volleyball Championship on Thursday.

Pike’s area championship was not only the Patriots’ first ever volleyball championship in the AHSAA but also the school’s first area/region championship in any sport since jumping to the public school athletic association.

Goshen moved on to face Pike Liberal Arts in the semifinals with the Lady Patriots coming out on top 3-1. Pike lost the first set 25-20 to Goshen but then answered by taking the next three consecutive sets. PLAS won 25-10, 25-20 and 25-18 in the next three sets.

Kaci Wilkes led Goshen in both of its tournament games with 24 kills, 14 aces, 24 digs and seven assists, while Alyssa Sparks earned 11 kills and 11 digs. Jaci Rushing totaled 29 assists and Emily Hussey chipped in with six assists and 10 digs in the two matches.

Highland Home defeated Luverne in the other semifinal match leading to the area championship. In the championship game, Pike swept the Lady Flying Squadron 3-0, taking all three sets 25-19, 25-22 and 26-24.

Pike Lib moves on to the AHSAA South Super Regionals next Thursday, Oct. 20, to face off with the Area 2 runner-up at 11:30 a.m. at the Cramton Bowl Multiplex.