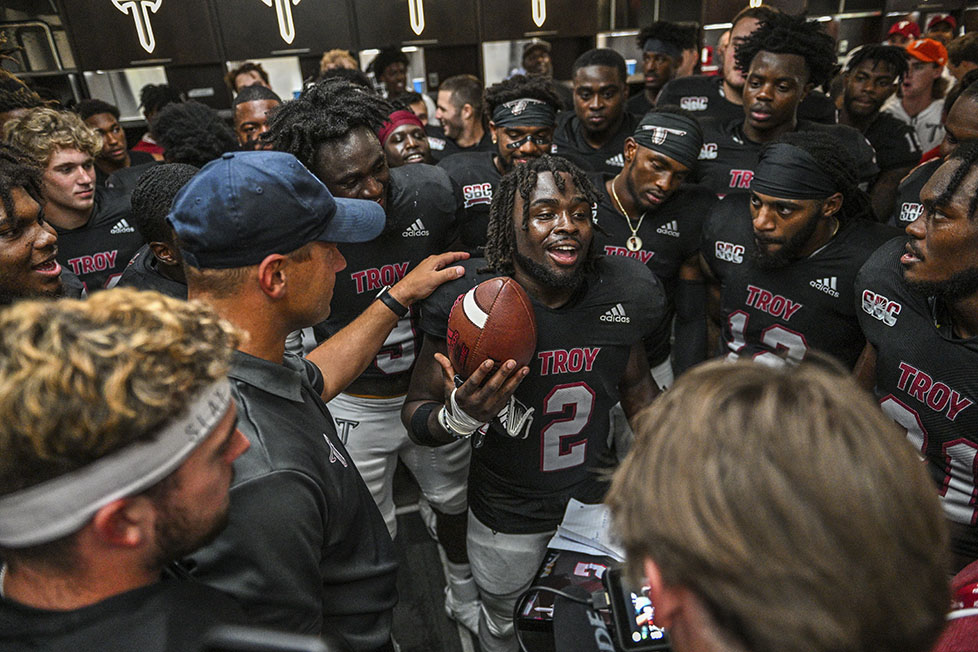 When his senior campaign is over, Carlton Martial will go down as one of – if not THE – most decorated football players in Troy University history.

Martial grew up in Mobile and was one of the best players at McGill-Toolen High School, one of the premiere high school football teams in the state during that time. Martial was an all-state linebacker in both his junior and senior seasons and as a senior amassed 120 tackles, 15 tackles-for-loss and six sacks as he helped guide McGill-Toolen to the state championship game.

Despite all of that success, he received no FBS scholarship offers. At 5-foot-9-inches, Martial was considered by some “too small” to play linebacker for a major college football team.

“Just being out there playing the game is all the motivation I need,” Martial said. “I’m going to get knocked for my size but I can’t change that. All I can do is go out there and play to my full potential and stick to the game plan and concentrate on my technique that I’ve been taught all these years by my coaches. All of those things are things I can control.”

Regardless, Martial did receive scholarship offers to a number of FCS schools along with preferred walk-on offers from FBS schools, like Troy.

Martial had made the decision that he would be accepting a scholarship offer to join his brother as a member of the University of North Alabama. Phil Martial was an FCS All-American and All-Conference defensive back with the Lions. Ultimately, Carlton Martial wanted to forge his own path and a young linebackers coach, Jon Sumrall, had been recruiting him to Troy.

“I made that call to Coach Sumrall and made the decision all the way up until the night before signing day,” Martial recalled. “I wanted to make my own path and make a name for myself.

“Looking at Troy, I saw the type of people that were from Troy and I even had some cousins and other older relatives that went to Troy. That helped me make my decision.” 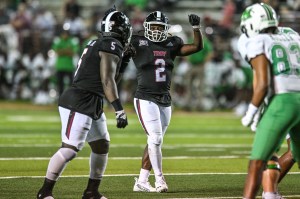 Carlton Martial (2) is on the verge of breaking numerous records this season. (Photo courtesy of Troy University Athletics)

His decision ended up being a good one for the inside linebacker. Not only did Martial end up earning a scholarship at Troy, he would go on to become an All-Sun Belt and All-American linebacker with the Trojans.

Coming into his senior season, Martial was on the verge of breaking numerous Troy, Sun Belt and NCAA records. Already this season, Martial has become the Sun Belt’s career tackle leader. He’s currently just 17 assisted tackles away from setting the NCAA record and he already holds Troy’s assisted tackle record. At the midway point of the season, Martial has 52 total tackles and with 52 more he’ll set the NCAA career record total. He also needs 70 more tackles to set the Troy career tackle record. With six more tackles behind the line he’ll also set the Troy record for tackles-for-loss. He’ll need 16.5 more tackles-for-loss to set that NCAA record, as well. Martial is also on the watch list for virtually every national defensive award. With so many accolades already under his belt – and more to come – Martial says he tries not to think about any of it.

“I try not to think about it too much at all,” he said. “The records are great but the main focus I have out there is getting a conference championship. We take everything day-by-day and game-by-game.

“The goal is a conference championship. I don’t want to look back on my past too much because I feel like I have a lot more to give to this game and to this team and I owe it to everyone that believes in me to focus solely on that right now.”

After the 2021 season it wasn’t a sure thing that Martial would return for his extra year of eligibility, however. Martial has been one of the best defenders in the country for his entire career, so he had options. Martial could have entered his name into the transfer portal – and likely had many choices – or he could have gone ahead and entered the NFL Draft, as well.

“My heart is in Troy and will always be in Troy,” Martial said of his decision to stay for one final season. “There were talks from people wanting me to go other places but I couldn’t bring myself to leave these guys or leave this team.”

Martial said that he feels some blame for the way the past few seasons at Troy have gone and that was also a contributing factor for his return.

“A lot of people ask me if it was the records or anything like that,” Martial said. “It was because I have love for this team and I feel like I dropped the ball myself, as a leader, these last few years.

“I feel like I dropped the ball in being that one guy that can stand out and be a vocal leader, not just someone that leads by example. That’s really what it was. I want to be a better leader and I just have so much love for these guys.”

That same coach that recruited him out of high school, was also trying to recruit him to stay at Troy, as well.

“It impacted my decision, for sure,” Martial said of Sumrall being hired as Troy’s new head coach. “When I first came here he was my first linebackers coach. Just having that connection with him, that helped build our relationship and it was a good feeling having him back here.”

Martial, who already has a Bachelor’s degree in broadcast journalism, said that despite all of the success on the football field, he hopes the legacy he’s leaving at Troy goes far beyond that.

“I just hope people remember me as a guy that was there for others,” Martial said. “I have great friends here, friends that will be in my wedding, that I can call any time and they’ll be there for me. I want to be remembered like that, I want people to remember me as someone that was always there for them when they needed me.

“Football is part of me but it isn’t all I am. It’s part of my personality but there is a lot more to me than football. I want my legacy to be that I’m someone you can depend on, that’s reliable and will be there when you need him.”