TJ Jackson making his mark as a pass rusher 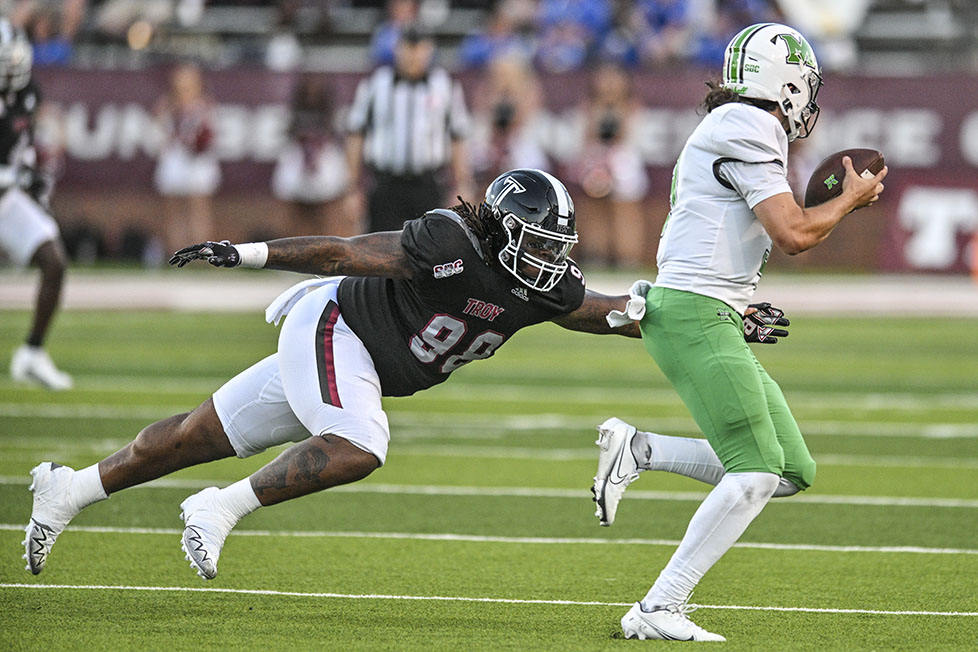 TJ Jackson (98) has been a force for the Trojan pass rush in 2022. (Photo courtesy of Troy University Athletics)

Troy sophomore defensive end TJ Jackson has exploded in the 2022 season, becoming one of the top pass rushers in the Sun Belt Conference.

Through six games, Jackson leads the entire Sun Belt in sacks (5.5) and tackles-for-loss (9.0) on the season. Jackson also ranks in the Top 10 in both categories in the entire country. He’s been a consistent force, as well, recording at least one tackle-for-loss and one sack in four of Troy’s first six games.

Jackson is a Millbrook native that was a standout defensive lineman at Stanhope-Elmore, earning 72 tackles, an eye-popping 41 tackles-for-loss and 11 sacks as a senior. As a freshman at Troy in 2021, Jackson recorded 12 tackles and a tackle-for-loss and showed promise in limited opportunities but it’s unlikely anyone saw the production Jackson is putting out as a sophomore coming, especially in a pass rushing group that includes veteran All-Sun Belt players like Richard Jibunor, Javon Solomon and Will Choloh.

In six games, Jackson has tallied 26 tackles, nine tackles-for-loss, 5.5 sacks and two forced fumbles for the Trojans. While his immediate impact this season may have been surprising, Sumrall could see early in spring practices that Jackson would be able to produce on the field. Sumrall teaches his pass rushers a technique he calls “match the hand” that Jackson was already doing, naturally.

“He does some things really naturally in pass rush, some of them very small and subtle,” Sumrall said. “With ‘match the hand’ you don’t leave your feet and jump when rushing the passer, just match your hand (up) to kind of block the quarterbacks view and maybe deter him from throwing the ball.

“When I got here in the spring and was teaching the guys (that technique), he was one of the only guys on the defensive line that already did it. He was doing that in like the second or third practice in spring and for a lot of guys, it was foreign to them, because they had never even heard that term.”

Jackson’s development since last season hasn’t been the only impressive thing as Sumrall says he’s been improving since game one, as well.

“I’m most proud of his technique development,” Sumrall emphasized. “We watched the video from Ole Miss and he made some plays that day but I thought his technique was not very clean.

“I thought he needed to get into a better stance and get into better linear movements that would allow him to play with more power and explosion. He’s improved in that area each week and I love the way he plays the game.”

The addition of Jackson as a playmaker on the defensive line makes an already deep, talented Troy defense that much more dangerous. The Trojan defense not only leads the Sun Belt in sacks – by a wide margin – but Troy’s also second in the conference in tackles-for-loss.

“Everyone knows about Richard and Javon and Choloh,” Troy coach Jon Sumrall said. “(Antonio) Showers has played a lot of football and Buddha (Jones) and Shakel Brown have made a lot of plays, but you add TJ and the impact he’s making, and it makes our front that much more versatile, flexible and gives us another guy that the offense has to deal with that creates problems in the pass rush.”

Jackson and his fellow pass rushers will look to heat up Texas State quarterback Layne Hatcher this Saturday for Troy’s Homecoming game at 2:30 p.m.