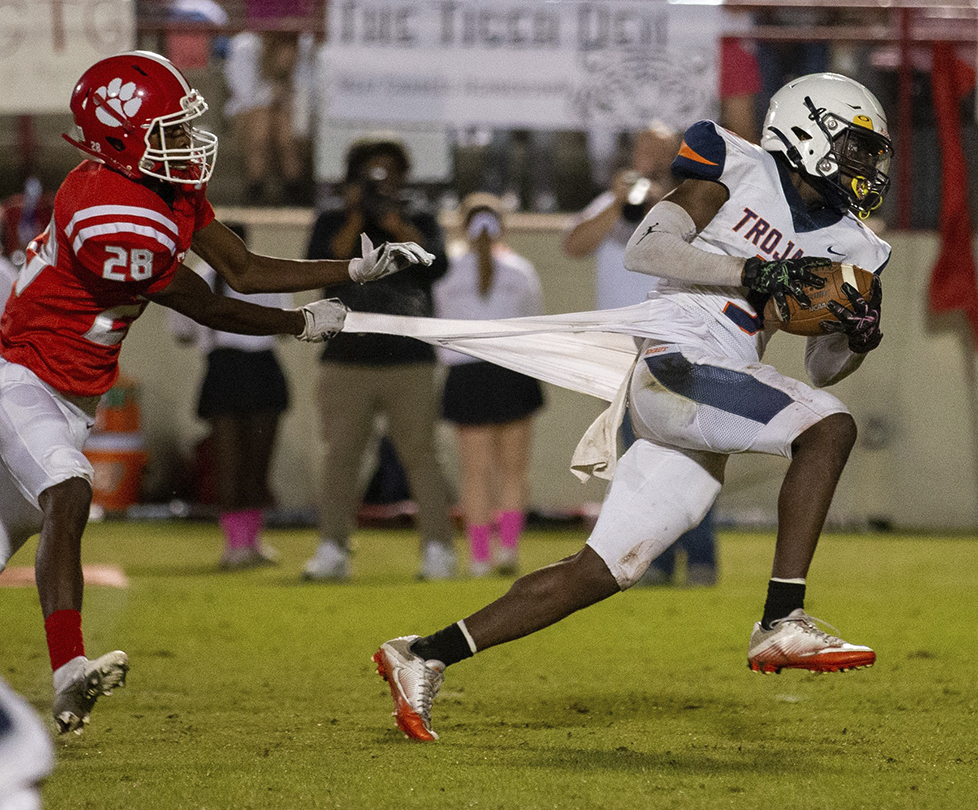 Stephon Mosley (3) has been a big-play target for the Trojans this season. (Photo by Dan Smith)

This week, Charles Henderson will wrap up region play on the road at Headland with a chance to go undefeated in region play for the first time since 2013. Headland, who lost to Carroll 42-8 last week, is looking for better positioning in the playoff seeding depending on how Carroll’s game against Greenville goes this week.

Headland and Charles Henderson’s common opponents so far this season include Eufaula, Rehobeth, Greenville and Carroll. CHHS defeated all of those teams, while Headland picked up wins over Rehobeth (12-3) and Greenville (38-22), while falling to Eufaula (35-20) and Carroll (42-8). Headland also lost to Pike County 18-13 on Sept. 23. The Trojans won a preseason jamboree over Pike County to start the season. In Headland’s lopsided loss to Carroll last week, the Ram defense gave up three rushing touchdowns.

Jy’won Boyd has been Adams’ favorite target in the passing game, amassing 31 catches for 548 yards and eight touchdowns, while Stephon Mosely also has 22 catches for 446 yards and four touchdowns. Boyd also has a punt return touchdown on the season.

Charles Henderson holds a 5-1 edge all-time over Headland with the Trojans’ only loss in the series coming via COVID-19 related forfeit in 2020. Charles Henderson defeated Headland 42-21 last season and has scored 42 or more points – including a 73-point outburst in 2012 – in all of the five on-field games between the two sides.

Charles Henderson and Headland will meet at 7 p.m. on Friday, Oct. 14, at J.J. Yarbrough Stadium in Headland.