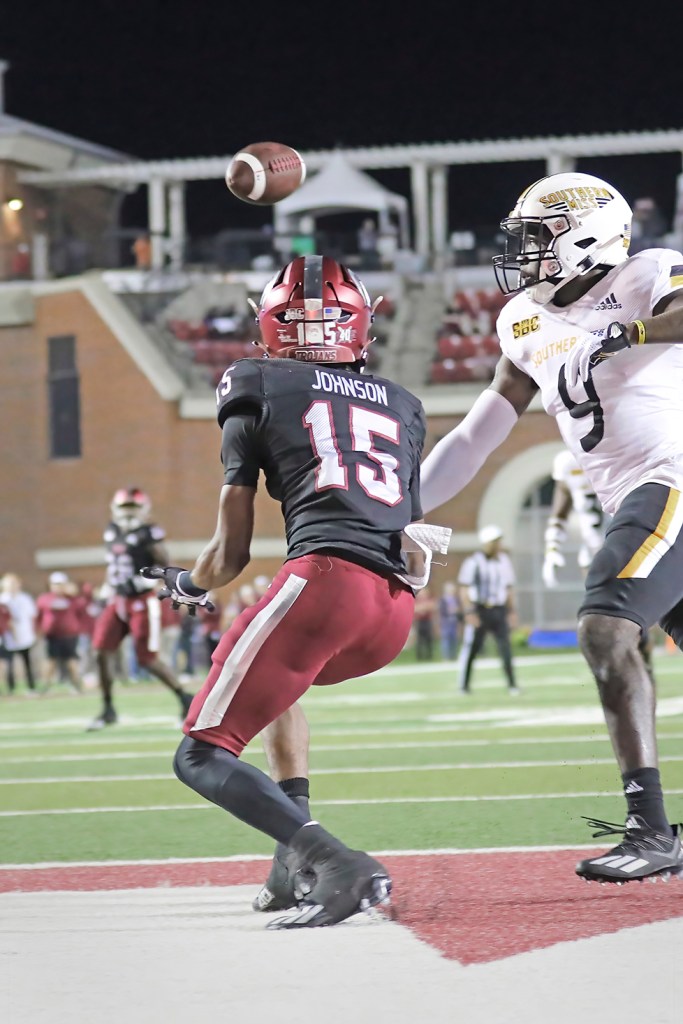 Dothan native Jabre Barber, Troy’s leading receiver, went down with a leg injury against Southern Miss last week. Barber did not reenter the game following the injury and Sumrall said after the game that it looked like it could be a significant injury.

On Monday, Sumrall said that Baber would be undergoing a “procedure” today to determine the extent of Barber’s injury and the estimated time he would be out, but emphasized that he didn’t believe it would be season ending. While Sumrall said that Barber would be out for the “foreseeable future,” he said that he believed it would be a 2-6 week timetable for his return. Barber was Troy’s leading receiver when he went down with the injury, totaling 25 catches for 351 yards and two touchdowns this season.

Sumrall said that defensive tackle and linebacker Jayden McDonald would miss their third straight game this week and said there is still no timetable for their returns, either. Tight end Deyunkrea Lewis, who has missed the past four games with a knee injury, is questionable for this week’s game but said that he’s confident that Lewis could be cleared for next week’s matchup with South Alabama.

Sumrall said that cornerback Caleb Ransaw, who suffered a head/neck injury against Western Kentucky, would again be doubtful for this week’s game. While Sumrall said that Ransaw “looked really good this morning,” he said that he didn’t think he would feel comfortable letting Ransaw play again yet, even if cleared.

Quarterback Gunnar Watson was cleared to play against Southern Miss but was held out for precautionary reasons. Watson will be available this week, but Sumrall was not ready to give a hint about who the starter on Saturday may be.

“I’ll know probably the middle of the week who we’re going to start at quarterback,” Sumrall said. “The nice thing is we have two guys with starting ability that have started games and we’ve won games with them being starters. That’s nice to have.”

This week is Troy’s Homecoming and The Messenger will have expanded coverage of Homecoming online and in Wednesday’s print edition.