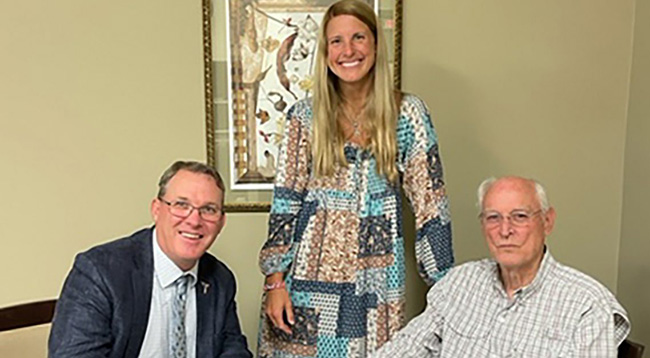 For Judy and Robert Cary, things just keep coming back to Troy University.

The couple’s 57-year marriage started here while they were students in the 1960s. The couple moved to Pensacola, Fla., where Robert worked in education and Judy worked as a nurse, but retirement brought them back to Troy, to a house just a few blocks from the campus.

Now, thanks to a pair of endowed scholarships in their name, Robert and Judy’s legacy will carry on in the lives of future Troy University nursing and education majors.

Robert said he and Judy were grateful to be able to help future nursing and education students by establishing an endowed scholarship with Troy University.

“We did not have children ourselves, and we thought that we could afford to offer help and support to someone else,” Robert said.

Robert arrived at what was then Troy State College in 1963, fresh out of the U.S. Army. He lived with a local family, who one Sunday was very insistent that he come to church with them. Turns out they wanted him to meet someone.

“They introduced me to this nice young lady,” Robert said. “And that was Judy.”

Although Judy was a student at Birmingham Baptist Nursing School, their relationship blossomed, and the couple married in 1967. When Robert finished his degree, the couple moved to Pensacola, where Robert taught fifth grade at a local elementary school. He was soon named principal at another school and held that position at several schools in the city over a career of more than 30 years.

During that time, Judy worked as a nurse in a local OB/GYN office, a job Robert said she was passionate about.

“She delivered a lot of babies in Pensacola,” he said.

Retirement brought the couple back to Troy, and Robert said they enjoyed being so close to the campus and seeing how much it had changed.

“I still enjoy driving through the campus and looking at the buildings and having so many good memories,” he said.

“I just hope to help a student in need get their education in nursing,” Robert said.