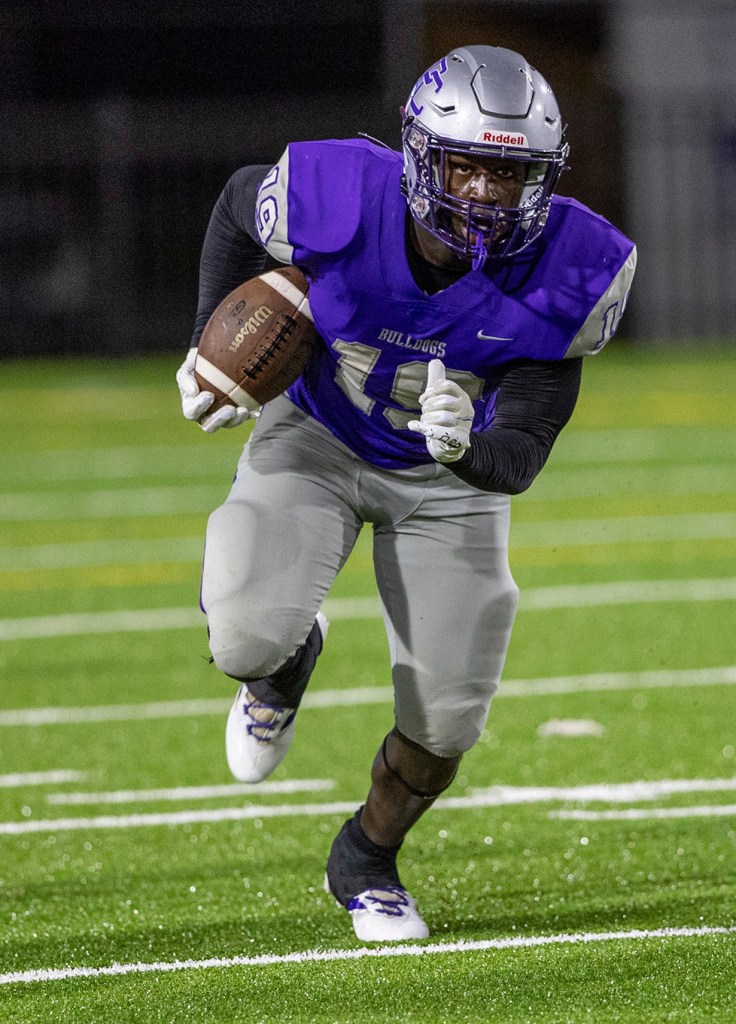 Pike County was also celebrating the debut of the school’s new jumbotron on the top of the scoreboard in one of Bulldog Stadium’s end zones. The Bulldogs got the game off to a hot start as linebacker Markelis Hobdy intercepted a Providence Christian pass on the first play of the game. The Pike County offense drove deep into Providence territory before turning the ball over on downs. After the two sides traded punts, Pike County ended the first quarter with an interception of its own.

The two sides remained knotted at a scoreless tie going into the second quarter. After an Eagle turnover on downs, the Bulldogs struck as quarterback Omari Barrow heaved a 55-yard touchdown pass to Chimarion Brown with 8:16 left in the first quarter to put Pike County ahead 7-0.

Providence Christian answered right back, however, and scored on a 20-yard touchdown pass from quarterback Craig Pittman to fullback Calvin McClintock with 3:11 left in the first half to tie the score 7-7.

On the very next Pike County offensive play, Barrow heaved a 39-yard pass to Ian Foster and then tossed a 7-yard touchdown pass to Foster on the next play to give Pike County a 14-7 lead with 2:48 left in the second quarter.

Providence Christian marched into the Pike County red-zone as the clock ticked under 30 seconds remaining in the half but a desperation pass was intercepted by Foster at the goal line and returned 100 yards for a touchdown in a dazzling finish to the first half, giving the Bulldogs a 21-7 lead at halftime.

Providence Christian pulled out some trickery to open the second half, recovering an onside kick, and then proceeded to march on a 14-play drive that ate up nearly eight minutes of the third quarter. It was all for naught, however, as the Eagles turned the ball over on downs.

For the remainder of the game, the two defenses kept the offenses out of the end zone. Pike County was forced to punt twice, but managed to burn clock and pick up multiple first downs on both possessions. Providence Christian turned the ball over on downs again and then Foster recorded his second interception of the game to seal the win late in the fourth quarter.

Nemo Williams led the Pike County offense with a career-high 174 yards rushing on 19 carries, while Hobdy rushed for 31 yards on four carries. Barrow completed 6-of-11 passes for 132 yards, two touchdowns and interception. Foster caught three passes for 58 yards and a touchdown, while also recording nine tackles, one tackle-for-loss and two interceptions on defense with one of those being a “pick-six.”

Providence Christian was led by Rylan Banner with 75 yards on 20 carries, while Pittman completed 8-of-18 passes for 117 yards, one touchdown and three interceptions.

Pike County is off next week before hitting the road for another region game with Daleville on Oct. 21.