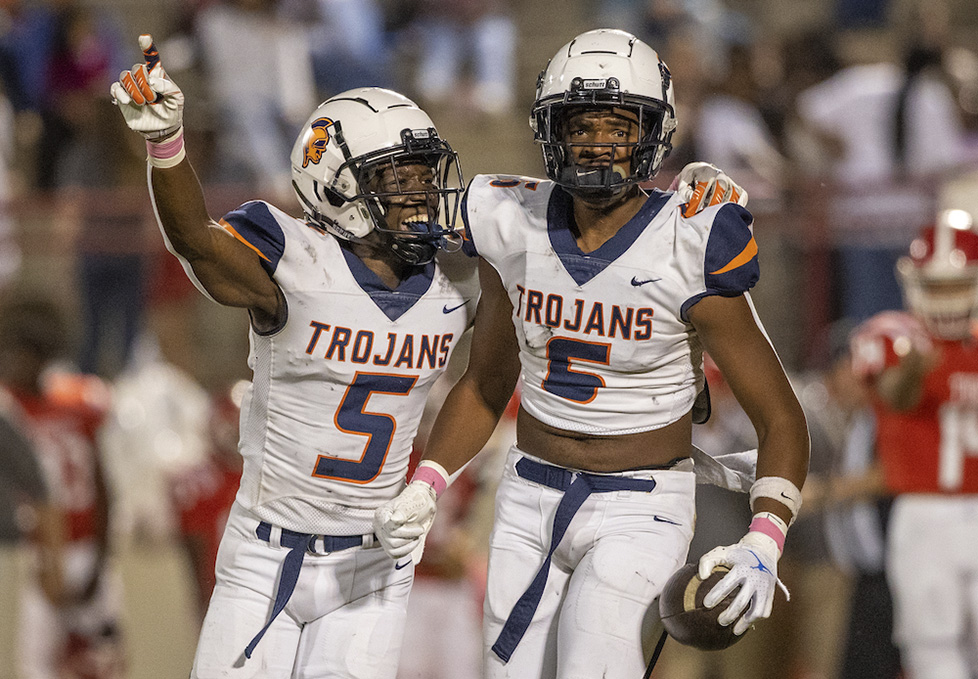 EUFAULA, AL – It has been almost ten years – nine to be exact – since Charles Henderson High has fielded a football team with the talent and energy that the 2022 squad possesses, and with a resounding 34-7 manhandling of Eufaula in their own Tiger Stadium Friday night, the Trojans are gaining momentum.

The Tigers of Eufaula were ranked No. 9 in the state in AHSAA Class 5A entering the contest, and both teams were 5-1 and 3-0 in Region 2. With the convincing win, the Trojans now have only one region game remaining next Friday at Headland and a non-region game on the road at Selma to conclude the regular season before the playoffs begin.

The virus bug made its rounds through the CHHS roster at a rampant pace in the last two weeks, adding more pressure to what was clearly the biggest game on the 2022 schedule.

In his second year as head coach, Quinn Hambrite called on all of his players and coaches to not lose sight of Friday’s opportunity.

“There were a lot of factors this week that could have caused us to lose this game had we not been locked in and focused,” said Coach Hambrite. “I’m extremely proud of the leadership these guys showed through all the adversity, and somewhat win the region. We still have to win down at Headland, but we knocked off a Top 10 team in the state, and I cannot be any more proud of these guys.”

CHHS scored on its second possession of the game when junior quarterback Parker Adams hit junior receiver Jywon Boyd for a 4-yard touchdown pass, Nik Peerson added the extra point and it was 7-0 with 6:02 remaining in the first quarter.

Qua Scott put CHHS up 14-0 when he stepped in front of a Copeland Cotton pass and raced down the right sideline 44 yards with the interception for a touchdown, and Peerson added the PAT.

Eufaula punted on its next possession and it took Adams and the Trojans only one play to get on the board again on a 36-yard TD pass to Stephon Mosely for a 20-0 lead with 9:41 remaining in the first half.

The Tigers got on the board on a 10-yard touchdown run by Cotton, the kick by Mauricio Perez Collazo was good and it was 20-7, which was the score at the half.

Both teams traded blows in the third quarter before Adams connected with Boyd on a screen pass to his right, Boyd ran towards his sideline and then heaved a 56-yard touchdown pass to Mosely for a 27-7 CHHS lead.

The final score for the Trojans came with 5:35 left in the fourth quarter when freshman running back Terrance Thomas fought his way in for a 3-yard TD, Peerson kicked and it was 34-7 which held up to be the final score.

Unofficial stats had Adams completing 13 of 22 for 132 yards and two touchdowns, while Zach Coleman rushed for 63 yards on 11 carries.

CHHS is at Headland next Friday then on the road at Selma the following week to conclude the regular season.