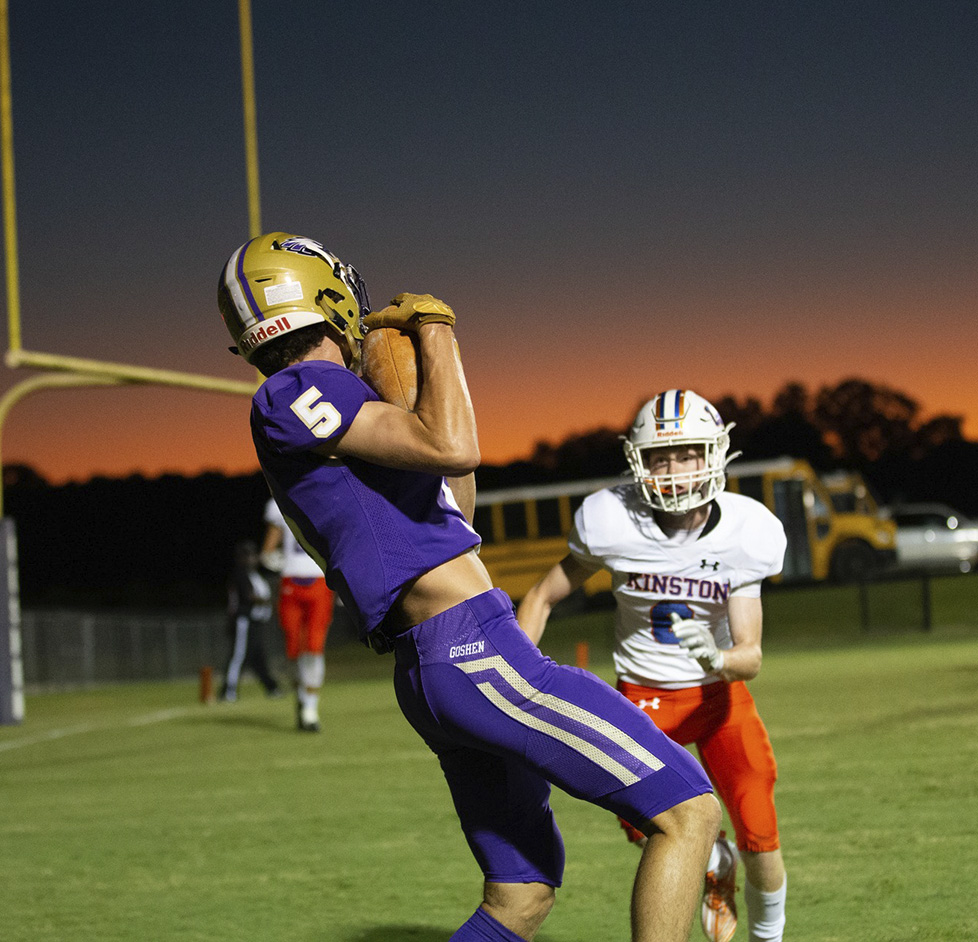 Goshen comes into this week’s game clicking on all cylinders after scoring 60 points or more in three consecutive games, which is the first time that’s happened in school history. In fact, Goshen’s 307 points scored so far this season is just the fourth time Goshen has scored more than 300 points in a season since 2011. The Eagles are currently averaging 43.9 points per game and their 307 points in seven games more than triples the point total Goshen scored in the past two seasons combined.

Goshen’s running game averages 282 yards per game and the Eagles have eclipsed 300 yards rushing three times this season. Senior Jamari McClure has 763 yards rushing and 11 touchdowns on just 76 carries, averaging an eye-popping 10 yards per carry. He also has eight catches for 211 yards and six touchdowns. McClure’s all-purpose yardage has eclipsed 1,200 yards in seven games with 17 total touchdowns. He also has 17 tackles, two tackles-for-loss and two interceptions on defense.

Szemerick Andrews has been the second part to Goshen’s “one-two” punch in the backfield, totaling 546 yards and seven touchdowns on 62 carries. Andrews also has 42 tackles, four tackles-for-loss, a sack, an interception return for a touchdown and a fumble recovery on defense.

Teams that attempt to concentrate solely on Goshen’s running game have been burned, as well. Quarterback Peyton Stamey has completed 20-of-45 pass attempts for 575 yards and 12 touchdowns. His favorite target is Tyler McLendon, who has 12 catches for 369 yards and five touchdowns.

Other playmakers that have emerged for Goshen are linebacker Andrew Galloway and defensive back/receiver KJ Bristow. Galloway has 40 tackles, seven tackles-for-loss, a sack and two interceptions. He also has four total touchdowns with two of those being defensive touchdowns along with a receiving score and a rushing score. Bristow has 168 yards rushing and three touchdowns on the season to go along with 20 tackles, two tackles-for-loss and an interception on defense.

Luverne is coming off a 41-14 region loss to Highland Home last week but prior to that was on a four-game winning streak of its own. In region play, Luverne shutout Barbour County and Horseshoe Bend and held on for a 26-25 win over Lanett before falling to Highland Home.

With four playoff spots in Region 3, Highland Home and Reeltown remain undefeated in the region, while Goshen, Luverne, LaFayette and Lanett are slugging it out for those final two spots making the remaining three region games pivotal ones for the Eagles.

Goshen holds a 6-26 record against Luverne historically and is currently on a four-game losing streak to the Tigers, dating back to 2018. Luverne defeated Goshen 48-6 last season and the last time the Eagles beat Luverne was a 27-13 win in 2017.

Goshen will host Luverne at 7 p.m. on Friday at Eagle Stadium.