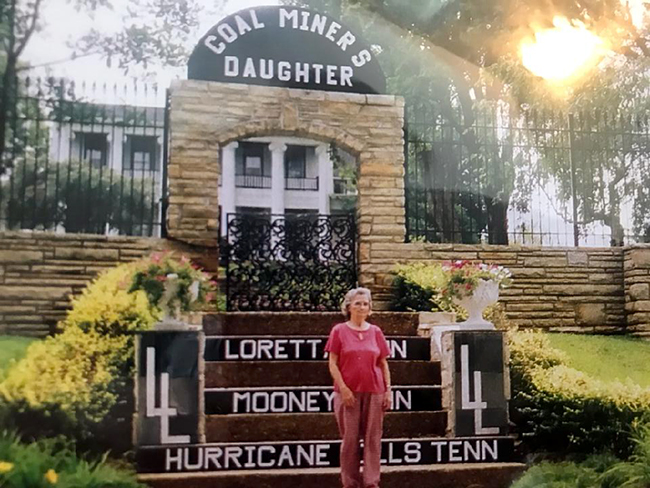 The death of Loretta Lynn, The First Lady of Country Music, on October 4, 2022, brought sad smiles to countless fans of the Matriarch of the Grand Ole Opry.

“You can’t think of Loretta Lynn and not smile,” said Lynn Stough of Troy. “She was the kind of person that made you smile.”

Perhaps it was twinkling way Loretta Lynn dressed that brought smiles to faces or, maybe, it was just her down-home honestly either way, she made people smile.

“I’ve been a fan of country music and Loretta Lynn for a long time,” Stough said. “I like to hear her sing and I like to hear her stories about where she grew up and how hard life was in Butcher Holler, Kentucky. My mama, Wilma Stough, grew up in place called Rabbit Holler and she could understand what Loretta Lynn was singing about. Loretta’s stories were much like Mama’s stories.”

Stough said she treasures the memories of riding down country roads in a pickup truck with hear mama and daddy.

“We would be listening to country music on 8-track tapes,” she said. “Mama’s favorite singers were Hank Williams and Loretta Lynn. I wanted so much for her to, one day, get to see Loretta Lynn in concert.

Years ago, Stough had planned to surprise her mama and take her to a Loretta Lynn concert in Montgomery but, because of health issues, they were unable to go.

“But then, in 2016, Loretta was going to be in concert at The Villages in Florida and we went. Mama and me,” Stough said. “We were excited so we got there early. I saw Loretta’s bus and walked over and asked if it would be alright to have a picture taken standing by the bus. The man said we could. A lady came over and I asked if I could get Mama out of the car for the picture. The lady was Loretta’s daughter, Patsy, and she was so nice and talked to Mama.”

Stough said the concert as a real treat for both her and her mom.

“Loretta said she didn’t like to be on stage singing in front of people; she would rather be writing songs,” Stough said. “That was one of my most special nights.”

“I’ll never forget how Mama’s eyes lit up when Loretta came out on stage, and how she smiled,” Stough said. “That was a very special time us and a highlight of my life to see Mama there and so happy.”

Stough stopped to remember how it was that she was named Lynn. after Loretta?

“That would be the case,” her mama said.

“Suggestions from relatives were Martha White, after the flour commercial, or Loreal after the makeup,” Stough said, laughing. “I’m proud they decided on Lynn. We are sad that Loretta Lynn died. But we have memories and we have her music. She will be remembered and loved for a long time by many people.”