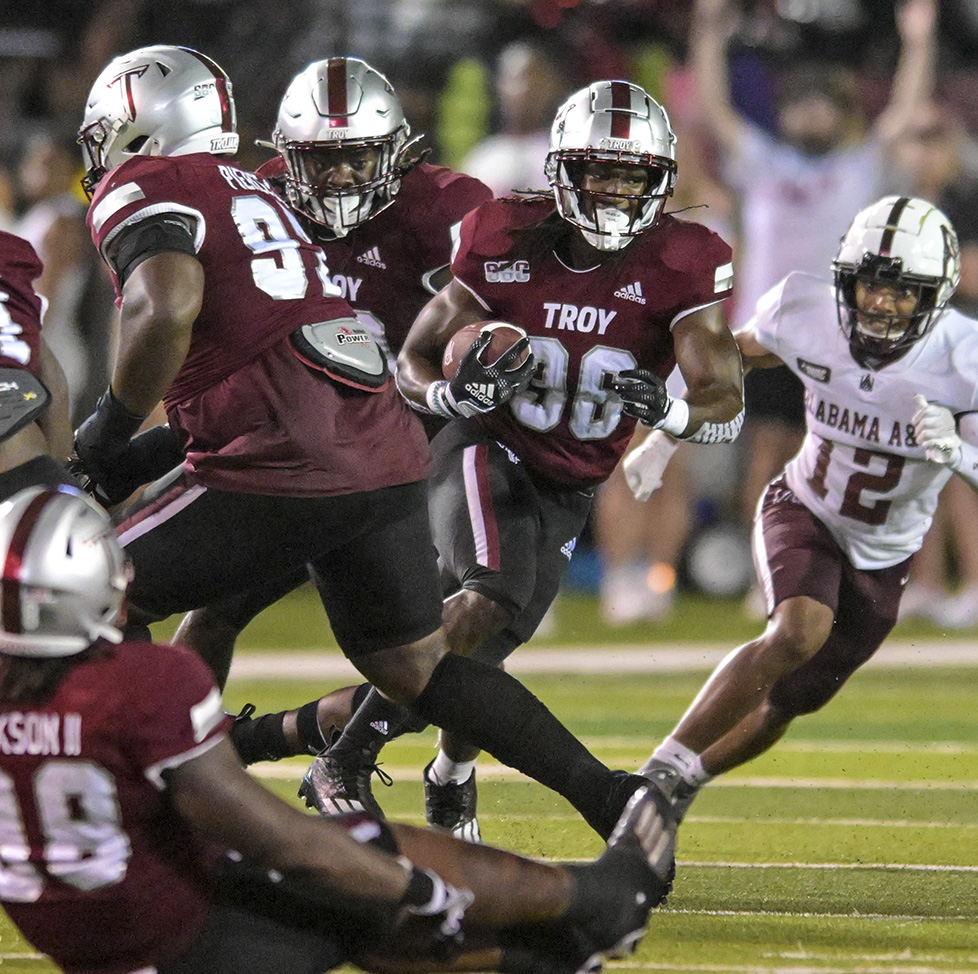 The Troy Trojans have faced a number of injuries throughout this season and head coach Jon Sumrall and is players have continuously preached a “next man up” mentality.

That mentality was as evident as ever as Troy picked up a big road win against Western Kentucky despite coming into the game with a number of starters unable to play due to injury and even more than went down with injuries against WKU. Those injuries included starting quarterback Gunnar Watson, meaning that Western Kentucky transfer Jarret Doege would see his first significant playing time as a Trojan against his former team.

“It was surreal,” Doege said of the moment. “You couldn’t have scripted it any better, it felt like a movie. I was excited to play and I was excited with the performance and to get the win.”

Doege came to Troy in August as the country’s active leading passer. He threw for 10,494 yards and 79 touchdowns in his career at both Bowling Green and West Virginia, including 3,048 yards and 19 touchdowns last season with WVU. Doege transferred to Western Kentucky in the offseason but departed to Troy after not winning the starting quarterback job during fall camp.

Doege’s transfer to Troy meant he stepped onto the turf at Houchens Industries LT Smith Stadium for the first time on the opposite side of the Hilltoppers.

“I’m not surprised at all,” Sumrall said of Doege’s performance. “He’s invested a lot of time into his preparation and I’ve already told him when he gets done playing I’ll hire him to be an assistant coach really quickly.

“He is a football junkie. He’s got all the stuff you want, really him and Gunnar both do. I mean they’ve both got the right mental makeup and they both love the game and love competing.”

Doege finished the WKU game completing 7-of-8 pass attempts for 71 yards and two touchdowns. His start, however, was a bit rockier. Doege stepped onto the field to a chorus of boos from the WKU faithful and then he dropped the first snap. Doege then proceeded to convert a third-and-long and eventually threw a 16-yard touchdown pass to Jabre Barber later in the drive.

“There was a misconception that I dropped (the ball) because I was nervous,” Doege said. “I just took my eyes off the ball, then we got into that third and long and were able to convert it.”

While Doege wasn’t the starter at Troy, he said that he prides himself in being prepared.

“I’ve been a starter the last five years pretty much and doing a back-up role has definitely been tough,” Doege emphasized. “I always pride myself in being the most prepared on the field and I wasn’t going to take a step back in my preparation, even though I wasn’t the starter.

Doege had the confidence of a starter and it showed in his play against his former team.

“I’ve been in this situation before, I’ve played in big-time games before,” he said. “So, I knew what to do, I was confident in myself, confident in my teammates and confident in my coaches. I just went out there and tried to play freely.”

Because of the number of injuries to Trojan players, especially on defense, Doege isn’t the only Troy player that’s had to take on that “next man up” mentality. Doege also isn’t the only late arrival to Troy that saw his number called against Western Kentucky.

Cornerback Kyle Cass transferred to Troy from Mississippi State in August and has been hard at work learning the Trojan defense since then. When starting cornerback Caleb Ransaw went down with a head injury against WKU, Cass saw more time on defense than he had all year to that point. He responded with three tackles, one tackle-for-loss and a pass breakup in the end zone.

“Kyle is a very impressive kid athletically,” Sumrall said of Cass. “He’s big and physical and can run. He’s learning and growing every day on how to play the corner position.

“There were a couple of things I might try to coach up on the sideline to get him cleaned up in some areas but he made some plays and he’s physical and has great length. He has a very high ceiling. He has to continue to work on his training and attention to detail to take it to the next step. I think he’s only going to get better and better the more reps he gets.”

Coming into 2022, linebacker was one of the deepest positions on Troy’s roster and in recent weeks that depth has been tested. Both starting inside linebackers Carlton Martial and KJ Robertson have missed games due to injury and Jayden McDonald has also missed the last two games. That has given more opportunities to redshirt freshmen Terry Thomas and Jordan Stringer.

“Terry is a really smart young man and runs really well,” Sumrall said of Thomas. “He’s not the biggest linebacker you will ever see but he plays the game with physicality and he’s good in space. I think he’s growing as a player and I’ve been excited about his growth since we got here in January.

“Jordan Stringer is another guy that is playing well. Jordan had an injury during spring and we weren’t sure what his timeline would be getting back. He didn’t play in game one but he’s played in every game since then and I’m really impressed with both of those young men and how they’re developing and I’m excited about their progression.”

Thomas has 12 tackles and an interception so far this season, while Stringer has totaled four tackles and a pass breakup. Thomas said that holding the standard as the “next man up” is important to him.

Troy’s “next man up” mentality will once again be tested this Saturday as Southern Miss comes to Veterans Memorial Stadium for a Sun Belt Conference matchup.