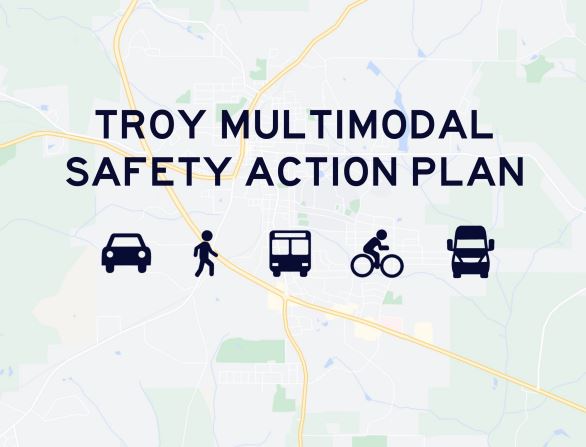 At the Sept. 13 Troy City Council Meeting, the City of Troy became the first city in the state to become a Vision Zero City after adopting its multimodal safety action plan. As a result, Troy qualified to apply for a federal grant, to help with street improvements.

That federal grant is the Safe Streets and Roads for All (SS4A) program, which if awarded will provide the city the funding for a more than $3 million project to help make roadways safer in the city. These projects include the improvement of pedestrian facilities along the North Knox Street corridor from Autumn Ridge Apartments south to North Three Notch Street. This project includes the construction of a sidewalk along this section of North Knox Street, ADA accessibility improvements and other supporting infrastructure and traffic control devices.

The second project aims to improve pedestrian facilities along Hubbard Street from Washington Park to Aster Avenue and along Aster Avenue from Hubbard Street to Gibbs Street. This will include new sidewalks along these sections, ADA accessibility improvements and other supporting infrastructure and traffic control devices.

To become a Vision Zero City, Troy had to come up with its safety plan and as a part of this plan the city took part in a safety data report alongside the Auburn University Transportation Research Institute (AUTRI) and The Fifty Fund. The Alabama Department of Transportation and the Federal Highway Administration also provided support for the plan’s development. Dr. Rod Turochy with AUTRI said “we are proud to have helped Troy develop its Safety Action Plan and adopt a Vision Zero approach to improving transportation safety. This plan outlines many opportunities for Troy – from road improvements and public safety campaigns – to reduce deaths and serious injuries on its roads.”

This report examined data from 2016 through 2020 through reported vehicle crashes in Troy. This analysis found that Troy had 3,416 crashes between 2016 and 2020 with six fatalities. Troy’s crash rate during that time span was 23.4 percent above the statewide average.

Severe crashes were defined as those that result in one or more fatality, serious injury or minor injury. Troy’s severe crash rate went from 6.5 percent in 2018 to 10 percent in 2020.

In the report, the analysis found that the most problematic causes for crashes in Troy were following too close to another vehicle and misjudging stopping distance (22.5 percent of crashes) along with various types of failure to yield at intersections (19 percent). Only 3.2 percent of crashes were caused by aggressive driving or driving too fast, while 3.8 percent were caused by distractions, four percent were failure to yield from a driveway, 4.3 percent were due to improper lane change and 9.7 percent were due to unseen objects, persons or vehicles.

Troy’s multimodal safety action plan, which is designed to help curb some of these traffic crashes, can be viewed in its entirety online at: https://tinyurl.com/2uscyzmk.