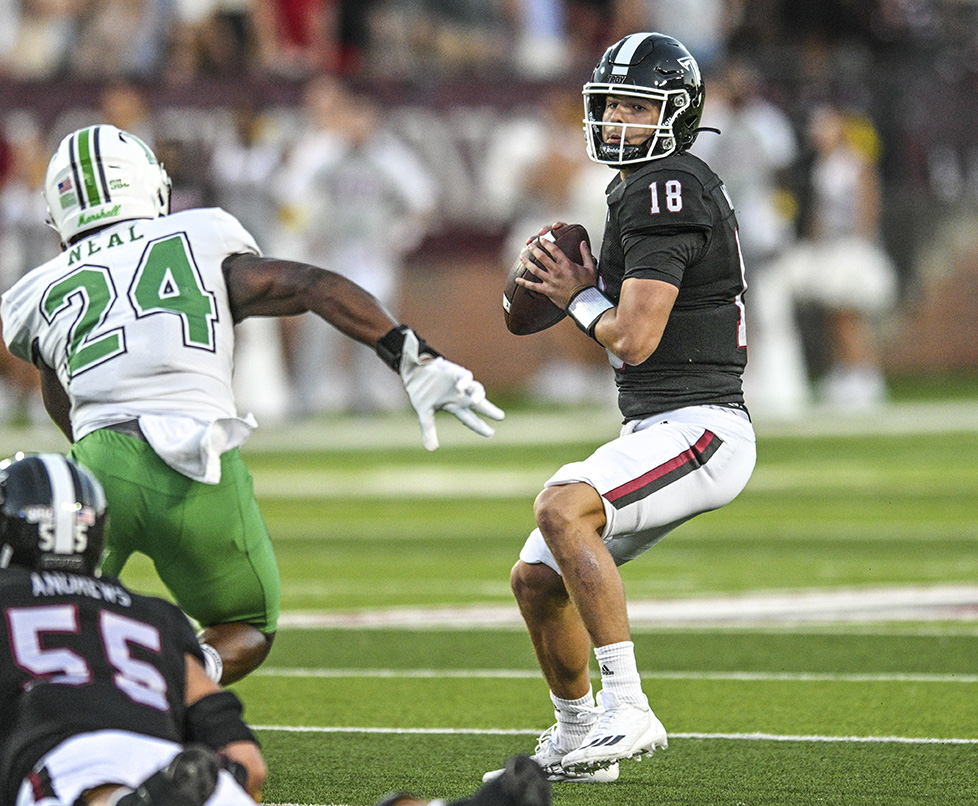 Gunnar Watson has thrown more 50-yard passes than any other quarterback in the country this season. (Photo courtesy of Troy University Athletics)

On Saturday night, the Troy Trojans (2-2) and Western Kentucky Hilltoppers (3-1) will renew an older rivalry at Houchens Smith Stadium in Bowling Green, KY.

It’s the first time that Troy and Western Kentucky have played since 2013, which was also the Hilltoppers’ final season in the Sun Belt Conference. Prior to WKU’s departure, the two sides had met seven consecutive times from 2007 until 2013. Troy held a 5-2 edge over Western Kentucky during that span.

Troy won the 2007 matchup, which was WKU’s final year in the FCS and then won the rematch the following year during the Hilltopper’s first year in the FBS. Western Kentucky joined the Sun Belt in 2009 and Troy won both the 2009 and 2010 matchups, but WKU responded by winning the next two in 2011 and 2012. The final matchup was a 32-26 win for the Trojans in Bowling Green.
The 2007 game between the two sides wasn’t the first time Troy and Western Kentucky had met, however. Troy holds an all-time 9-2-1 record over Western Kentucky with the two sides meeting for the first time in 1976. That first game saw the two sides battle to a 10-10 tie. At the time, Western Kentucky and Troy were both a part of Division II with WKU playing in the Ohio Valley Conference and Troy in the Gulf South Conference.

Troy is coming off a 16-7 win over Marshall last week in a game in which the Trojans held an offense that was averaging over 500 yards per game to just 174 total yards. Troy’s defensive leader Carlton Martial earned 18 total tackles on the afternoon enroute to winning Sun Belt Defensive Player of the Week. In the process, Martial also became the Sun Belt’s all-time tackle leader.

While Troy’s offense struggled to get in the end zone, between the 20s the Trojan offense was dominant. Troy put up 421 yards of offense and had a number of gains of 40 yards or more. In fact, Troy enters the Western Kentucky leading the entire country in pass plays over 50 yards.

Meanwhile, Western Kentucky has been one of the top offenses in the entire county this season.

“They’re a really challenging opponent, Western Kentucky played in the Conference USA Championship and finished 9-5 last year,” Troy coach Jon Sumrall said. “They have a really high-octane offense and are 3-1 on the year with the only loss to Indiana in overtime. They were up 10 points late and could very easily be 4-0.

“They are explosive offensively with a lot of really good weapons. I’m really impressed with them personnel wise. They’re very similar structurally to what we saw at Ole Miss from an offensive standpoint.”

WKU quarterback Austin Reed is one of the top passers in the country and is a West Florida transfer. In 2019, Reed led West Florida to a Division II National Championship, throwing for 4,089 yards and 40 touchdowns. At WKU he’s continued that success, completing 104-of-142 pass attempts this season for 1,257 yards and 14 touchdowns. His favorite targets so far this season have been Malachi Corley and Daewood Davis. Davis has hauled in 22 passes for 354 yards and three touchdowns, while Corley has 20 catches for 273 yards and five touchdowns. Davis is an Oregon transfer.

Troy and Western Kentucky will kickoff at 6 p.m. in a game that will stream live on ESPN+.