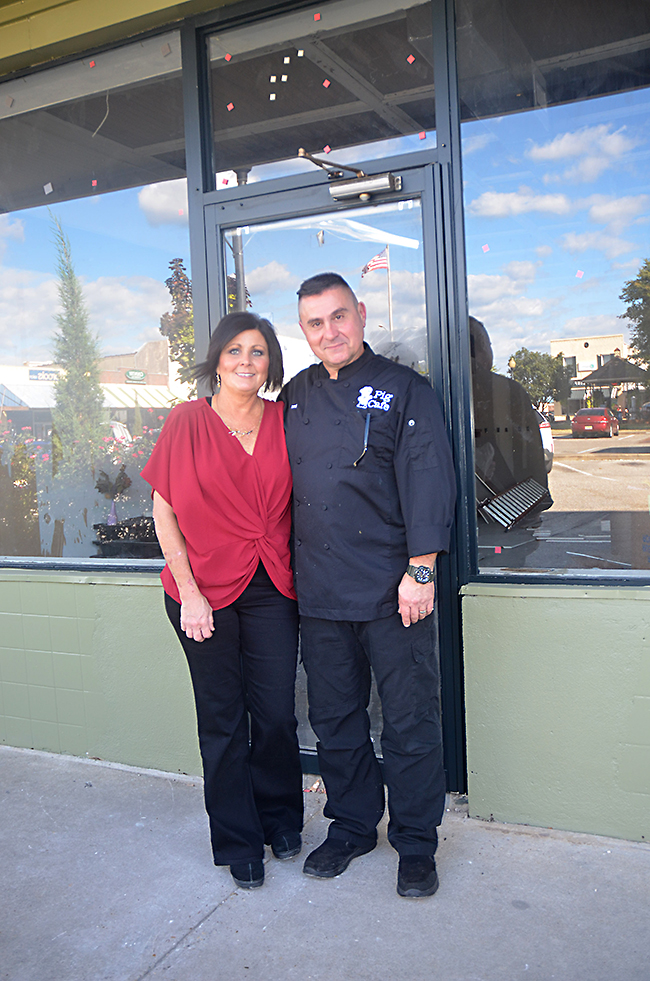 Jaine Treadwell | The Messenger Yanni and Denise Tempelis are the owners of the former Riverside Café building on the square in downtown Troy. Yanni is the second Greek owner of the building where the tradition of fine food and good times began. The building is being renovated as The Market, a restaurant and food boutique. The couple also owns and operates the Pig Café and Francesca’s, Italian Restaurant both in Troy.

Yanni Tempelis believes, and knows, that anyone, who comes to America and works hard and does the right thing, will have opportunities for success that can’t be found anywhere else in the world.

Tempelis is Greek. He was born and grew up in Amigdalia, a close-knit village of 300 in the deep mountains of Greece.  He came to America in 1996, perhaps, as did George Sitaras, who came from the Greek Island of Patmos in pursuit of the American dream.

The backstory, as recorded by Rice, is that Sitaras came to Troy with his sister, Mary, and brother-in-law, Victor Balako, in 1914.  Balako opened Mary’s Place cafe and Sitaras opened a café (Riverside) on South Court, except it wasn’t called the Riverside when it first opened.

The story is that a fire occurred at The Riverside Café on the Alabama River in Montgomery. The café was heavily damaged and the salvaged café items were offered in a fire sale. Sitaras went to the sale and came home with the lighted sign, “The Riverside.”

Although there was no river in sight of downtown Troy, Sitaras hung the sign at his restaurant and, thus began, The Riverside’s tradition of fine food and good times. The Riverside quickly became the number-one late-night eatery in Troy, a tradition that continued for nearly five decades.

The today story of interest is that the building that once housed the Greek-owned The Riverside café in downtown Troy has another Greek owner. Yanni Tempelis and his wife Denise, are in the process of renovating the former Riverside café building as The Market, a restaurant and boutique.

“It is amazing that two Greeks would own a restaurant, in the same building in Troy, Alabama, and one hundred years apart,” Tempelis said, with a shake of his head. “Denise and I will carry on the tradition of fine food and good times that George Sitaras began in 1914 and continued for nearly 50 years.”

However, Tempelis said he and his wife will begin a tradition of their own.

“We can’t, and don’t want to even try to, recreate a restaurant tradition that George Sitaras started,” Tempelis said. “That would not be right or fair to try to do what he did and did so well. We could not do justice to him or to the history of The Riverside. Denise and I will have to create our own history.”

Both, Yanni and Denise Tempelis said, knowing what they know now about George Sitaras, they are even more dedicated to the success of The Market and to the continuation of good food and good times.

The Market will offer both a “cafe” style restaurant that features Southern cooking and a food boutique that features  meals without the cooking.

The Market will honor the history of downtown Troy with photographs and other memorabilia and also the Greek ownership that is the foundation and the continuation of the good-food, good-times around the square in downtown Troy.