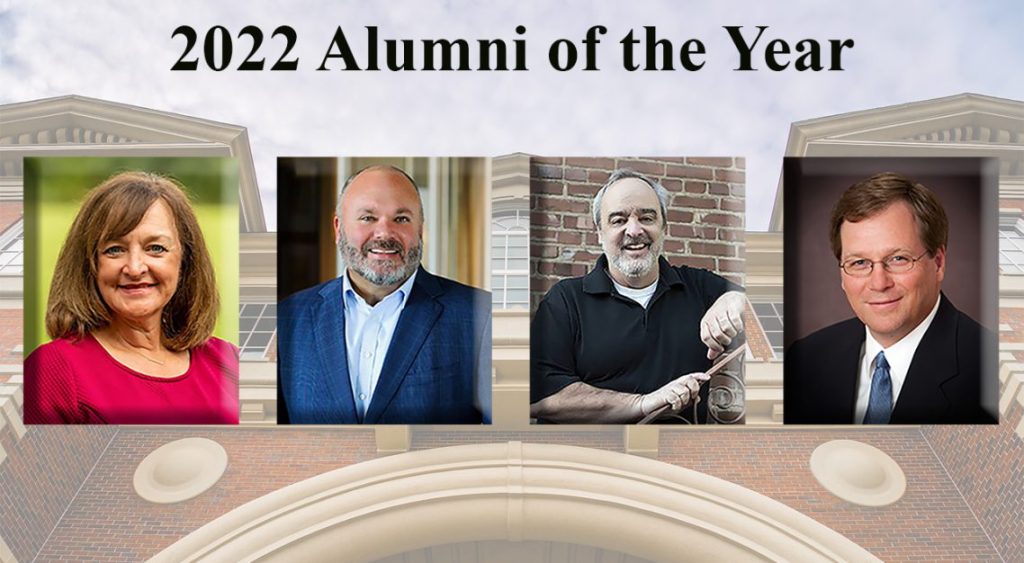 Dr. Dee Dupree Bennett, Britton Bonner, Gerry Brooks and Jeffrey D. Kervin will be honored at Homecoming as Alumni of the Year recipients.

The group of four honorees will be recognized during this year’s Homecoming football game on Oct. 15 when the Trojans welcome Texas State to Veterans Memorial Stadium. Kickoff time for the game is set for 2:30 p.m. and the Alumni of the Year recipients will be presented at halftime.

This year’s honorees are: Dr. Dee Dupree Bennett (’93,’94), an Assistant Professor of Instructional Leadership and Administration at Troy and co-founder of SHORT the Squirrel Literacy Initiative; Gerry Brooks (’88), a veteran educator and school principal in Kentucky most widely known for his humorous videos on social media that focus on real-world educational experiences; Britton Bonner (’96), Partner with the law firm of Adams and Reese, LLP; Jeffrey D. Kervin (’85), President and Chief Executive Officer of Troy Bank and Trust.

“Troy University is pleased to recognize four Alumni of the Year who truly exemplify the Trojan spirit,” said Faith Byrd, Director of Alumni Affairs. “Through their accomplishments and dedicated service to their communities, their careers and their Alma Mater, these alumni have and continue to represent Troy well.”

Dr. Dee Dupree Bennett (’93, ’94) is an Assistant Professor of Instructional Leadership and Administration at Troy University and is co-founder of SHORT the Squirrel Literacy Initiative. SHORT the Squirrel came to life when Bennett and fellow Troy alumna Monica Anderson Young saw the need presented by the youngest visitors to the state’s court system. The initiative got its start in Mobile courtrooms with the booklet “SHORT in Court” and quickly spread to all 67 of Alabama’s counties. The program received a 2020 Alabama Law Foundation grant and also has been endorsed by Alabama Gov. Kay Ivey. Earlier this year, Bennett was named to the 2022 Class of Women Who Shape the State of Alabama by the organization This is Alabama. Bennett previously served as a school administrator for 17 years. She earned a bachelor’s degree in Early Childhood Education and a master’s degree in School Psychometry from Troy, and holds a Ph.D. in Educational Leadership with an emphasis on virtual schools from Columbus State University. Bennett is an active member of the Eufaula Heritage Association, Holy Redeemer Catholic Church, and a lifetime member of the Troy University Alumni Association. She has served as an advisor, leadership consultant, and alumnae chapter president for Alpha Gamma Delta social organization. Bennett and her husband Jason live in Eufaula and have two daughters Bailey and Betsy, one a Troy alumna and one a current Troy student.

Gerry Brooks (’88) is a veteran educator in Lexington, Kentucky. His educational experience includes six years in the classroom, two years as an intervention specialist, and 12 years as an administrator. An encouraging speaker, he has spoken to educational groups all around the nation. He desires to help administrators focus on how to lead all staff in a positive and constructive manner. Brooks is a voice for teachers, but his passion is leading others to be responsible for their own personal climate and culture in the workplace. His book, “Go See the Principal,” outlines strategies for taking on this responsibility. Brooks is perhaps most widely known for his humorous videos on social media that focus on real-world educational experiences. He is active on Facebook, Instagram, Twitter and YouTube and currently has a following of more than 1.2 million people. Brooks is a lifetime member of the Troy Universiy Alumni Association. He and his wife, Kelly, have 3 adult children.

Britton Bonner (’96) is a Partner and Business and Government Practice Group Leader with the law firm of Adams and Reese, LLP. After earning his bachelor’s degree from Troy in 1996, Bonner went on to earn his Juris Doctor from Tulane University in 2000. Bonner advises clients on government relations and economic development matters across the United States, and works with public sector clients, advising municipal and other governmental entities on growth and revitalization efforts. In the last few years alone, he has handled projects that represent several billion dollars of capital investment in the southeastern United States. Bonner has always been active in community causes. He is a graduate of Leadership Alabama and Leadership Baldwin County and currently serves as Chairman of the Board for the Coastal Alabama Partnership, and most recently as Vice-Chairman for the Mobile Area Chamber of Commerce. He is a former Chairman of the Baldwin County Economic Development Alliance, the South Baldwin Chamber of Commerce, and Habitat for Humanity of Baldwin County. Bonner is a former Vice-Chairman of the Baldwin County Republican Party, and is a past President of TROY’s Southwest Alabama Alumni Chapter and a lifetime member of the Troy University Alumni Association. He is also a former member of and served a four-year term on the Alabama State Republican Executive Committee.

A Troy native, Kervin earned his Bachelor of Science in Business Administration and Management degree from then Troy State University in 1985. An active member of the community, Kervin has served as Lay Leader at Oak Grove United Methodist Church, where he and his wife Janet are members, since 1989. He has also been a Board member of the church since 1995, and currently serves as a District Trustee for the Montgomery-Opelika District of the Alabama-West Florida Conference of the United Methodist Church. Kervin is also a board member of the Alabama Bankers Association, the Johnson Center for the Arts, the Pioneer Museum of Alabama and the Pike County Economic Development Board. He is a member of the Troy University Foundation Board of Directors, TROY’s Sorrell College of Business Alumni Advisory Board and a member of the Pike County Alumni Chapter. The Kervins have one son, Joel.