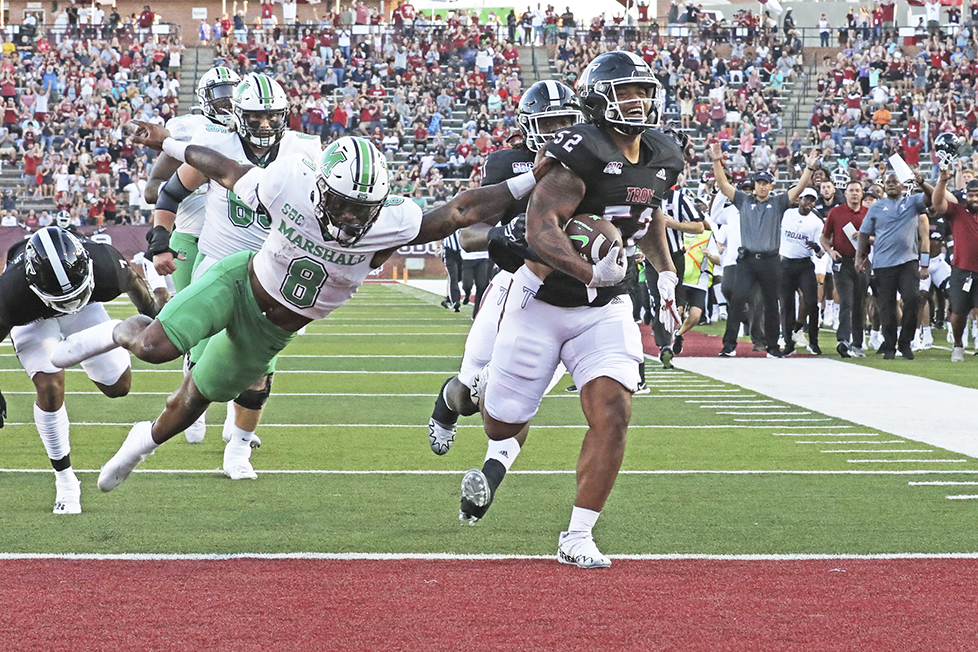 After a heartbreaking loss to Appalachian State, Troy was motivated to get back on the right track against Marshall and while the score indicates a close game, the scoreboard doesn’t tell the whole tale.

Troy outgained Marshall 421 yards to just 174 yards, but turned the ball over twice and went just 2-for-5 in the red-zone. Those mistakes allowed Marshall to hang around on the scoreboard, but outside of one scoring drive, the Thundering Herd never truly threatened the Troy defense.

“I think we came back after the heartbreak (last week) with great effort and competed,” Troy coach Jon Sumrall said. “We still have a long way to go but we’re pleased with a win. Two weeks ago tonight I was standing here before you disgruntled with how we played against Alabama A&M in the first half.

“Two weeks ago tonight Marshall beat Notre Dame. Fast forward two weeks and we beat them and I don’t think it was as close as the scoreboard (indicates). I feel like we could have pulled away and we didn’t execute in some areas.”

Unlike previous games, the Trojans came out firing on all cylinders. Gunnar Watson found Marcus Rogers for a 50-yard gain on the first drive and Troy drove inside the Marshall red-zone before Watson fumbled on a strip sack snuffing out the drive. 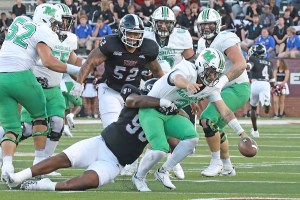 The Troy defense answered right back, however, as TJ Jackson sacked Marshall quarterback Henry Colombi forcing a fumble and Buddha Jones scooped it up for a touchdown to put Troy ahead 7-0 with 10:51 left in the opening period. That would turn out to be Troy’s lone touchdown on the night. It was also not only Jones’ first collegiate touchdown but he said it was the first time he’s scored a touchdown since he was in the third grade.

“That changed the momentum of the game early in the game,” Sumrall said of the defensive score. “We got down and turned the ball over in the red-zone and then we score on defense. That’s really making a statement and stopping the momentum they had and creating momentum for us.”

Watson found Tez Johnson for a 63-yard pass on its next drive and eventually Brooks Buce converted a 40-yard field goal to put Troy up 10-0. Troy had another scoring opportunity inside the Marshall 10 but Jamontez Woods fumbled giving Marshall the ball back.

After both offenses sputtered for the remainder of the half, Marshall managed to drive inside the Troy 15 with under 20 seconds remaining. Troy’s Caleb Ransaw blocked Marshall’s last-second field goal attempt, though, and Troy went into halftime with the 10-0 lead.

Troy linebacker Carlton Martial, returning from injury this week, also went into halftime as the Sun Belt’s all-time tackle leader after recording 10 tackles in the first half. Martial would finish the game with 18 total tackles and a helmet with almost all the paint chipped off on one side from contact.

“It was really emotional for me,” Martial said of returning to the field. “Missing a game last week everyone would say, ‘If you played this or that would have happened,’ and I just felt like it happened for a reason.

“I was more upset with myself that I missed that experience with those guys. That’s one I can’t get back but I just look forward to taking the field for every game (the rest of the season).”

In the second half, Troy’s offense continued to sputter and at one point went three-and-out on four straight drives. During that lull, Marshall managed to get on the scoreboard with a 14-yard touchdown run at the end of the third quarter to cut Troy’s lead to 10-7.

“I was very frustrated in the third quarter, I felt like we were lethargic,” Sumrall said. “I went to the offensive coaches and players and said, ‘Y’all have to help us win this game. We have to make some plays.’ They were able to do that but I would like to see us finish some of those big pass plays and take those to the house and leave no doubt.”
Troy’s offense got moving again and managed to drive twice into Marshall territory. One of those drives was set up by a 60-yard catch-and-run from Watson to Jabre Barber. Neither of those trips to the red-zone resulted in touchdowns, however. Still, Buce converted both a 25-yard and 28-yard field goal to extend the lead to 16-7. Marshall never got back into scoring position.

“We were 2-of-5 (in the red-zone) and that’s just awful,” Sumrall emphasized. “That won’t win you very many games. That’s an area where I probably have to do a better job in practice.”

Marshall used two quarterbacks in the game but neither managed to string together much offense and the Trojan defense harassed the quarterbacks all game long. Marshall managed just 78 passing yards and Troy recorded six sacks as a defense. Martial led the Troy defense with 18 tackles and one quarterback hurry, while TJ Jackson had six tackles, 2.5 tackles-for-loss, a sack and a forced fumble. Richard Jibunor, Phillip Lee TJ Harris and Javon Solomon each had a sack, as well.

Watson completed 15-of-25 passes for 321 yards and an interception, while DK Billingsley rushed for 85 yards on 14 carries. Billingsley’s yardage against Marshall was more than his yardage totals in both 2020 and 2021 combined. Kimani Vidal added 34 yards on nine carries and Troy surpassed the 100-yard mark rushing for the first time this season.

“We were better,” Sumrall said of the running game. “We’re still not good enough but we’re better. We’re getting there and we’re slowly improving.

“I challenged our running backs. I thought last week we left some yardage on the field by not finishing some runs the right way. I told them I wanted to see them run angry and with physicality and I think we at times we did that.”

Khalan Laborn led the Marshall offense with 118 yards and one touchdown rushing on 30 carries.