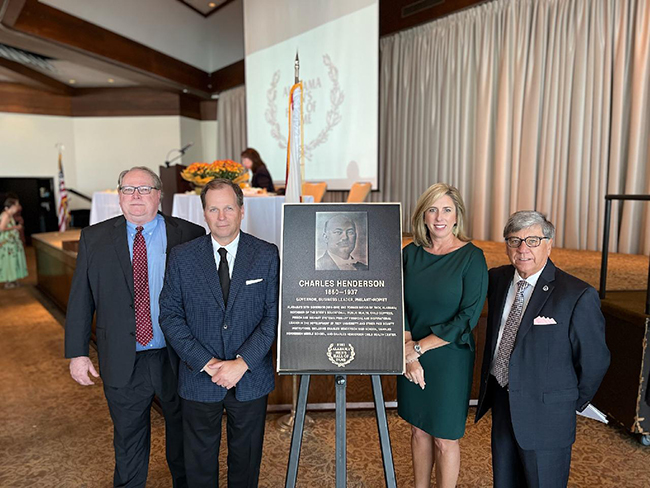 Former Alabama Governor Charles Henderson (1860-1937) a native of Pike County, was inducted into the Alabama Men’s Hall of Fame at The Club in Birmingham on September 20, 2022.

Founded by the Alabama legislature in 1987, the hall recognizes men whose lives have impacted the state, nation and the world.

In noting the impact of Henderson, who served as Alabama’s 35th governor, 1915-19, he was recognized as a conservative who championed a degree of reforms to the state’s education, public health, child services and prison and highway systems. Henderson was instrumental in founding Troy University and a philanthropic trust established by him as been used to fund schools in Pike County and the Charles Henderson Child  Health Care Center.

Jeff Kervin, Troy Bank & Trust president and CEO, was among those from Pike County who attended the induction ceremony for Henderson.

The trust that Henderson established, that was/is administered through Troy Bank & Trust, provided for the construction of schools in Pike County between 1956 and 1976.

Following the 20 years Henderson had designated for schools in Pike County, his trust provided monies for a hospital for children who had been crippled by polio. However, polio had been eradicated. Therefore, the funds were used to provide a healthcare center for children that would provide quality services regardless of the ability to pay.

The future is bright in the area of child health care because the Charles Henderson Child Health Center provides the highest level of healthcare to children ages to 19.

“The future is so bright and full of purpose in the area of child health care because Charles Henderson was purpose and mission driven,” Kervin said. “And, because it was his desire to provide opportunities for children to grow and proper and make the world a better place.”