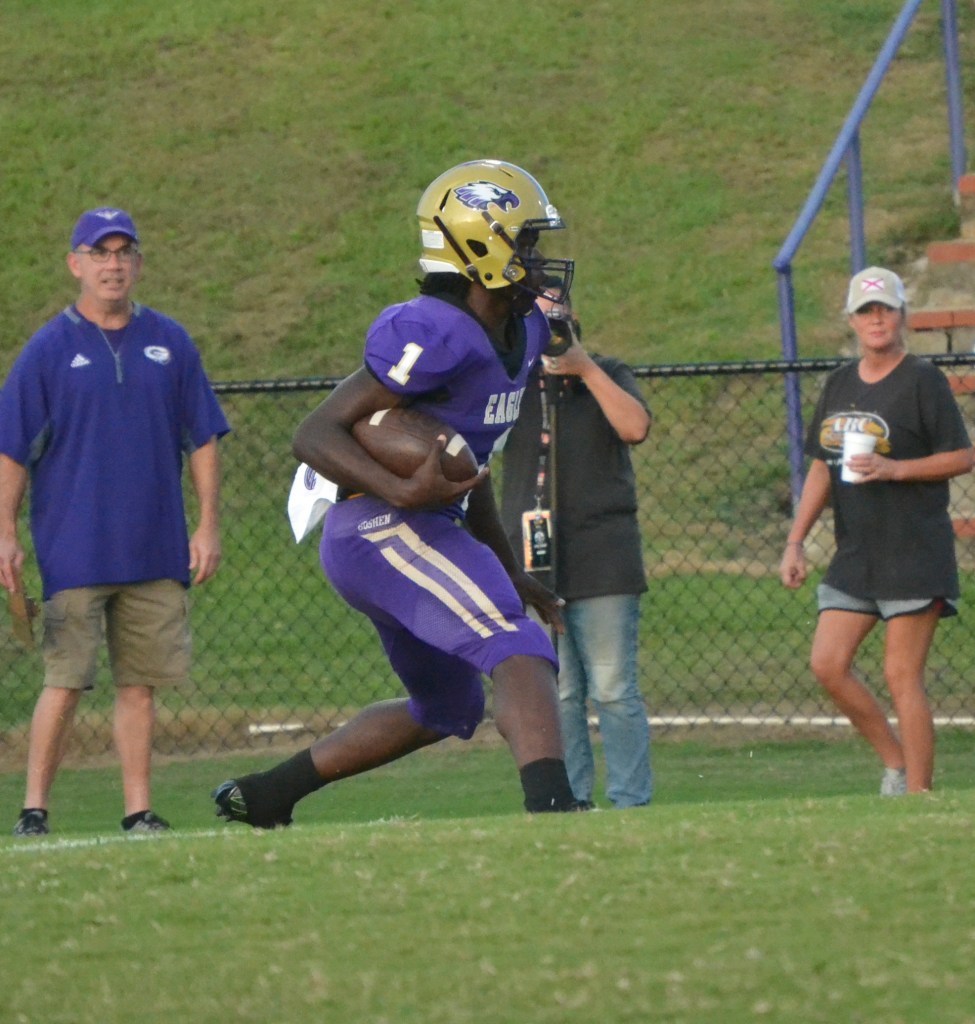 Jamari McClure (1) has been one of the top running backs in the area this season for Goshen. (Photo by Josh Boutwell)

Both the Goshen Eagles (3-2) and Zion Chapel Rebels (1-3) are back at home this week for non-region action.

Goshen is coming off its 60-28 route over LaFayette on the road last week and will face off with Class 1A’s Kinston Bulldogs (1-3) this Friday at home. Kinston won its first game of the season over Samson but the Bulldogs have lost three straight since then, including a 53-6 loss to Brantley last week.

Goshen running back Jamari McClure was nearly unstoppable against LaFayette last week. The senior tallied 196 yards rushing and three touchdowns on just 10 carries, while he also caught three passes for 103 yards and two touchdowns. In total, McClure compiled 354 all-purpose yards and five total touchdowns on the night. He also earned an interception on defense, as well.

Goshen quarterback Peyton Stamey completed 6-of-9 pass attempts for 183 yards and three touchdowns against LaFayette and Tyler McLendon caught two passes for 71 yards, while Andrew Galloway caught a touchdown pass and also returned an interception for a touchdown.

This is the first time that Goshen and Kinston have met on the gridiron since 2005 and the two schools have only played twice in total. Kinston won the first matchup, a 40-6 win in 2004, while Goshen took the 2005 game by a score of 7-0.

The Rebels are coming off a tough 35-0 loss to Ariton last week after picking up their first win of the season the previous week. This week, Zion Chapel hosts Class 1A’s Pleasant Home Eagles (2-2), who are coming off a 50-20 loss to Florala a week ago. Pleasant Home also holds wins over AL Johnson and McKenize this season and also lost to Red Level, as well.

Last week, sophomore Micah Fuller rushed for 91 yards on 15 carries against Ariton and Layton Grantham totaled two tackles and a sack on defense. Zion Chapel, who are dealing with a number of injuries, have totaled just 173 yards passing so far this season but are averaging 144 yards per game rushing. Freshman Brayden Benbow leads Zion Chapel on defense with 40 tackles, two tackles-for-loss and a sack.