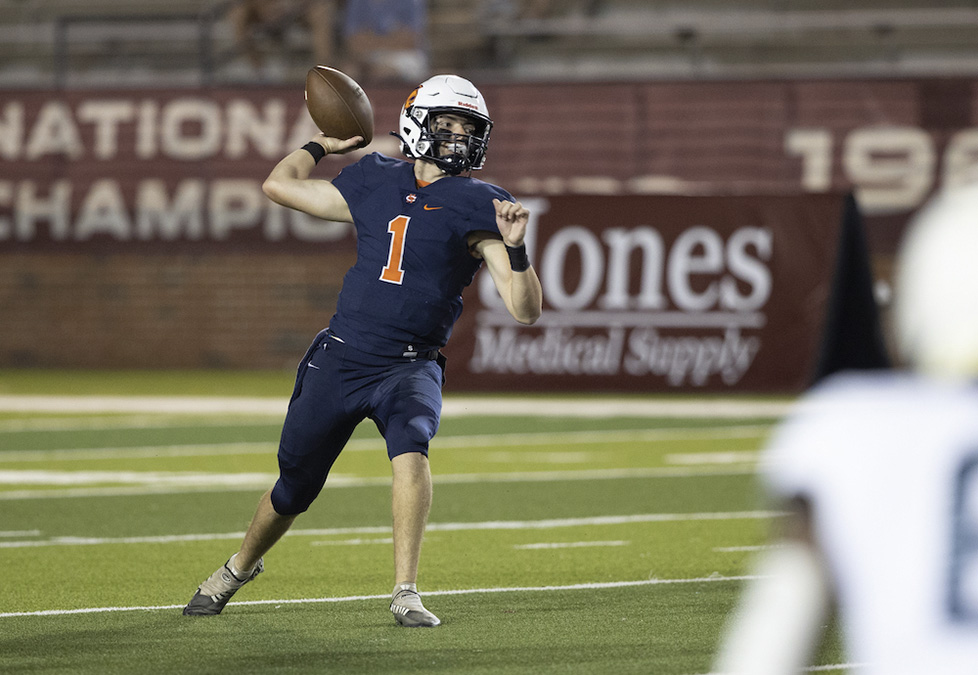 St. James actually got on the scoreboard first after starting the game on a 12-play scoring drive, capped off by quarterback KJ Jackson’s 1-yard touchdown run with 7:00 left in the opening period to put the Trojans from Montgomery ahead 7-0.

The lead didn’t last long, however, as Charles Henderson marched right down the field on its ensuing possession and running back Zach Coleman scored on a 16-yard run to tie the score 7-7 with 3:55 left in the first quarter.

Charles Henderson took its first lead of the game on a 14-yard touchdown from quarterback Parker Adams with 9:00 left in the second quarter to give CHHS a 14-7 lead. Charles Henderson maintained that lead until the final seconds of the half.

With just three seconds remaining in the first half, Jackson heaved a 20-yard touchdown pass to Zudarian Holloway to tie the score 14-14 at halftime.

Both Adams and Jackson came into the game having not thrown an interception all season long. That changed in the second half for both players. Adams was intercepted to start the third quarter and St. James proceeded to drive inside the CHHS 10-yard line. Jackson was then hit in the backfield by Charles Henderson’s Zion Grady, forcing a fumble, which was recovered by Jalen Suddith.

Charles Henderson retook the lead 20-14 on a 7-yard touchdown run from Coleman with 5:10 left in the third quarter. The PAT was no good. On the ensuing drive, Jackson threw his first interception of the season when Charles Henderson safety Mario Davenport made a leaping pick inside the CHHS 10-yard line.

Neither team was able to find the end zone again until Charles Henderson’s Jy’won Boyd returned a punt 45 yards for a touchdown with 9:45 left in the game. The PAT was no good but CHHS maintained a 26-14 lead.

St. James drove into Charles Henderson territory twice more but each time, CHHS came away with an interception. First, Sequan Fagg came down with a leaping interception at the CHHS 25-yard line and on St. James’ final drive, Qua Scott intercepted a Jackson pass and returned it 35 yards to seal the win.

Charles Henderson finished the game with a total of 290 yards, 186 yards on the ground, while St. James totaled 288 yards with most of it coming through the air. Coleman and Antonio Frazier were workhorses on the ground for CHHS as Coleman rushed for 77 yards and two touchdowns on 13 carries, while Frazier rushed for 64 yards on 10 carries.

Charles Henderson will close out its regular season home slate next Friday against Rehobeth in a return to region action.