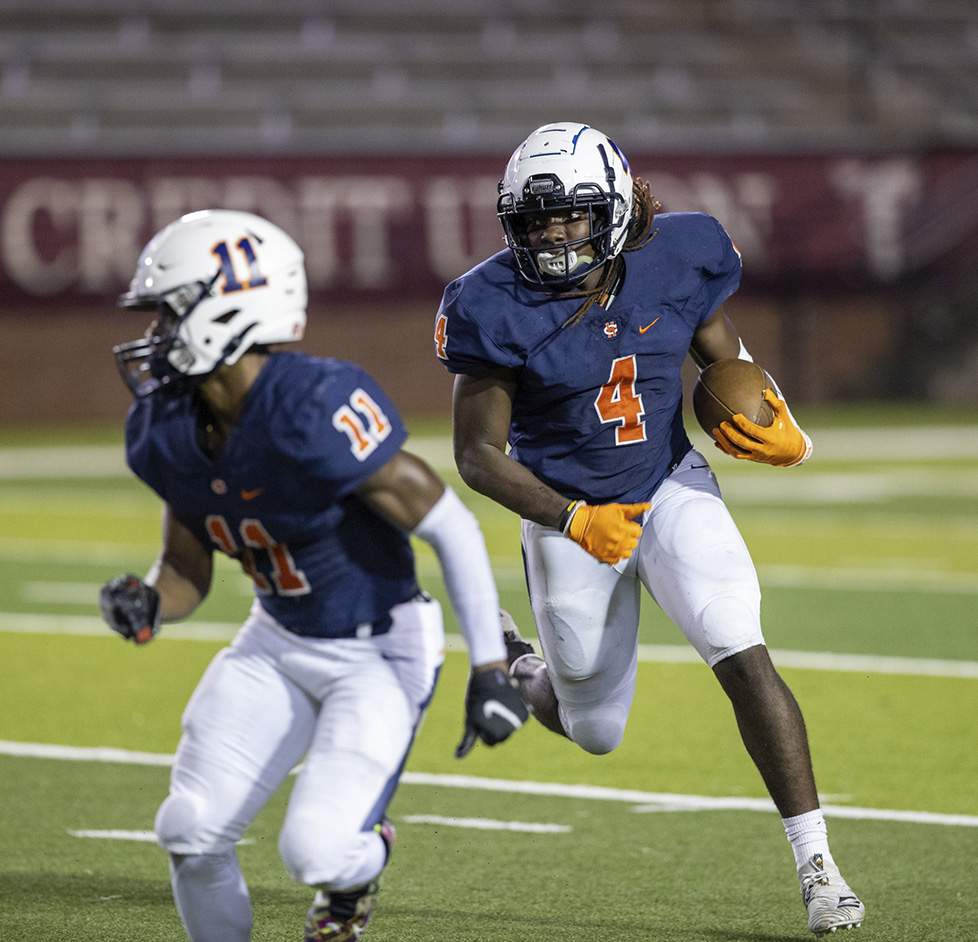 Zach Coleman (4) will lead the rushing attack against St. James this week. (Photo by Dan Smith)

The Charles Henderson Trojans (3-1) will host Class 3A’s St. James Trojans (4-1), out of Montgomery, in a “Trojan Battle” on Thursday night in a non-region game at Veterans Memorial Stadium.

Charles Henderson is coming off its first loss of the season, a frustrating 26-24 loss to Beauregard last week.

“We played hard, we just didn’t finish the way we wanted to finish. The guys made some mental busts at the end of the game,” CHHS coach Quinn Hambrite said of the loss. “We came out strong and went up 14-0 and then stalemated after that. We have to learn how to finish and keep pushing throughout the game.

“No one is just going to lay down for you. We have to do a better job of execution and cleaning up those mental busts. We improved on our dropped passes from the previous week and penalties but we have to get better across the board.”

The Trojans from Montgomery, meanwhile, have won three straight games including a dominant 56-14 win over Southside Selma a week ago. In fact, St. James has defeated its last three opponents by a combined score of 54-20.

“St. James is a tough team, they average about 40 points a game,” Hambrite said. “They can score and they can stretch the field. They have a Division I quarterback that can sling it all across the field.”

That quarterback is junior KJ Jackson, who holds countless college offers from schools like Troy, Kansas, Kentucky, Louisville, Ole Miss, Missouri, Penn State and others. The gunslinger is currently ranked as the No. 20 pro-style quarterback in the country in the Class of 2024 by Rivals. So far this season, Jackson has thrown for 940 yards and 17 touchdowns without throwing an interception on 42-of-62 passing. Senior running back Cosner Harrison also helps bring balance to the St. James offense with 435 yards and nine touchdowns on the ground. The St. James defense has also been a ball-hawking defense earning six interceptions already this season.

“We have to go out there and attack,” Hambrite said. “Defensively, they play with discipline and they’re a well-coached, well-oiled machine. They don’t make mistakes and they’ll be where they’re supposed to be on every play.

“We have to execute and give ourselves a chance to win through our execution. It’s going to be a tough game for us, for sure.”

The Trojans from Troy also boast weapons all over the field. Quarterback Parker Adams has thrown for numbers that are very similar to Jackson’s, with one less game. Adams has completed 54-of-84 pass attempts for 985 yards and 11 touchdowns without throwing an interception. Jy’won Boyd has 16 catches for 420 yards and seven touchdowns so far this season, averaging 26.3 yards per catch. Also, three Trojans have more than 150 yards rushing with Zach Coleman leading the team with 217 yards and four touchdowns on 39 rushing attempts.

This is Charles Henderson’s second Thursday night game in the past three weeks, an adjustment Hambrite believes his team handles well.

“Today is our walkthrough, which is the last work day we have and we’re just keeping them mentally locked in,” he said. “Short weeks are more about the coaches being prepared than anything, because we have to come in on Sunday with the entire game plan. So, that means we have to work on Saturday and get that ready. It’s extra important for the coaches and I think our players adjust to it pretty well for the most part.”

Charles Henderson and St. James will kickoff at 7 p.m. on Thursday night at Veterans Memorial Stadium in Troy.