Pike Lib gets set for homecoming clash with Montgomery Catholic 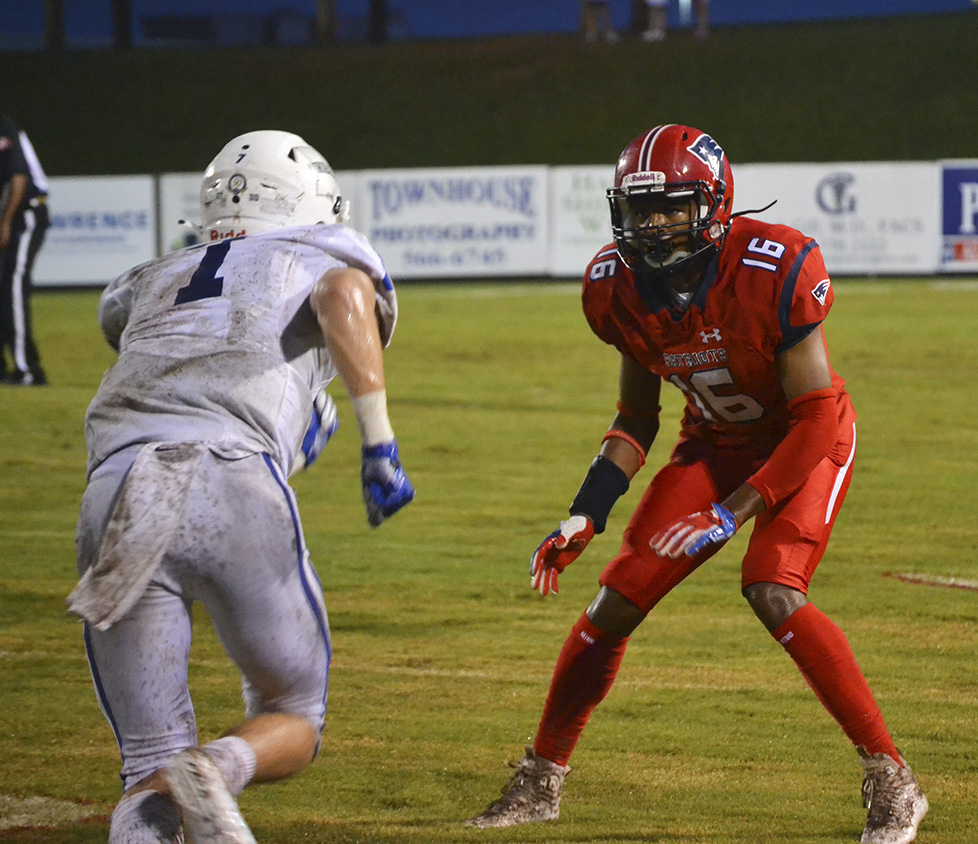 Michael Vaughan (16) and the Pike Patriots will host Class 4A’s No. 1 Montgomery Catholic Knights this Friday. (Photo by Josh Boutwell)

The Pike Liberal Arts Patriots (0-4) are back at home this Friday night for a homecoming matchup with Class 4A’s No. 1-ranked Montgomery-Catholic Knights (5-0).

After a pair of tough road games in Florida the past few weeks, Pike finally returns to the friendly confines of Dewight Ward Field in Troy. Pike Lib went into last week’s 45-0 loss to Port St. Joe High School less than two days after head coach Travis Baxley was dismissed from the school.

“Coming off everything we’ve been going through these past few weeks, I thought we came out with some good energy (against Port St. Joe) but we didn’t execute assignments as well as I would have liked for us to,” interim coach Charlie Scofield said. “The teams we’re going up against right now, their depth is unmatched. We have kids playing both ways compared to the teams we’re playing with full offensive and defensive rotations.

“That’s unfortunate we have to go up against that week after week but there are little things we can improve on and that’s what we’re stressing this week.”

Scofield, who was in his first year as assistant athletic director, head basketball coach and assistant football coach at Pike Lib before becoming interim head football coach, said he couldn’t be more proud of the way his team has fought through the adversity of a season that has seen the arrival and departure of two head coaches and a number of players transferring out of the program.

“I love these kids and I’m appreciative of the support I’ve gotten from everybody at the school, whether it’s the parents, the administrators or the kids themselves. They’re the hardest working group of kids I’ve ever been around and it’s a privilege to get to coach them.”

The Patriots will have their work cut out this week as possibly the toughest opponent on one of the toughest schedules in the state comes to town. Montgomery Catholic is the top ranked team in Class 4A and is averaging 55.8 points per game and has allowed just a total of 42 points in five games. In the past two weeks, the Knights outscored Slocomb and Geneva by a combined 120-0. The Montgomery Catholic defense hasn’t allowed a single point in the past 10 quarters.

One of Montgomery Catholic’s top players is running back Jeremiah Cobb, who is committed to play college football at Auburn. In five games, Cobb has rushed for an eye-popping 849 yards and 15 touchdowns on just 68 rushing attempts. He’s also caught nine passes for 174 yards and four more touchdowns.

The Knights also boast cornerback LJ Green, who is committed to Georgia Tech, and quarterback Caleb McCreary. While McCreary hasn’t committed to a college yet he has offers from across the nation, including Arkansas State, Georgia Tech, Nebraska, Liberty, Maryland, Troy and South Alabama. McCreary has thrown for 1,061 yards and 17 touchdowns with no interceptions along with rushing for 311 yards and a touchdown this season. Green has two touchdown catches along with 15 tackles, three tackles-for-loss and a sack on defense. The leader of the Knight defense, however, is linebacker Zach Underwood, who holds college offers from Georgia Southern and Austin Peay. Underwood has totaled 32 tackles, 15 tackles-for-loss and seven sacks this season.

As difficult of a task as this will be for Pike Lib, the players are looking at it as a chance to compete against some of the top college prospects in the state.

“It’s going to be a big test but also a big opportunity for our kids that are trying to play at the next level,” Scofield said. “It gives them the opportunity to show what they have against some serious players.”

PLAS and Montgomery Catholic will kickoff at 7 p.m. this Friday at Dewight Ward Field.