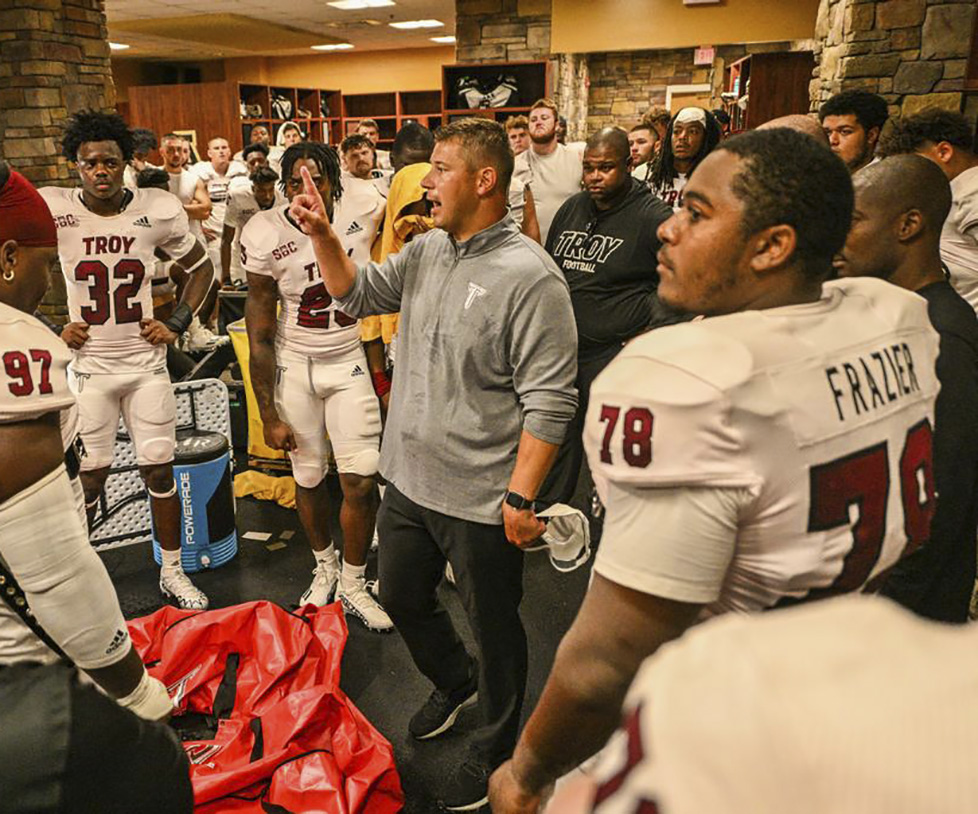 Coming off a frustrating loss on a last second ‘Hail Mary’ throw last week, Troy Trojans head coach Jon Sumrall discussed the final minute of the game that led to that play at his Monday press conference.

The Troy defense made a stop on its goal line late and after running clock and forcing Appalachian State to burn its final timeouts, the Trojans faced a fourth down leading 28-24. With under 30 seconds left, Sumrall decided to run off clock further and take a safety instead of risking a punt backed up deep in Trojan territory.

“Taking the safety I still think is the right call looking back it,” Sumrall emphasized. “We were able to run 10 seconds off the clock there (between the safety and free kick).”

Sumrall said that the ensuing kickoff is the regret he has. The Trojans squibbed the kick short and allowed Appalachian State to return the kick to around midfield with 13 seconds left.

“I didn’t coach the kicker well enough on that kickoff,” Sumrall said. “We call that a ‘Victory Kick.’ It’s not a true squib kick and also not a sky kick where they can fair catch and it conserve time.

“It’s a kick that’s supposed to be line drive oriented but pushed way further down the field where they have to field it deep and they also can’t catch it and run some clock.”

Sumrall took all the blame for the way the kickoff was handled but emphasized he still believes the safety was the right decision.

“I didn’t coach the kick well enough, that’s on me not the kicker,” Sumrall said. “If, after that scenario, they beat us on a field goal then it would have been a bad decision but clockwise it helped us to take a safety rather than having to line up against a 10-man rush on a punt where they may have been able to block it.

“I study these situations, that’s what I do. I don’t regret taking the safety but I do wish I had done a better job at coaching the kicker. The biggest regret I have through that whole process is I wish I would have coached the kicker a little bit better on that kickoff.”

Sumrall has some previous experience with a “Hail Mary” finish having been a redshirt freshman at Kentucky for the famed “Bluegrass Miracle” game in which LSU defeated Kentucky on a final throw in 2002. Interestingly enough, LSU won that game when a tipped pass fell into a receiver’s hand much like what happened to Troy. Sumrall received a text this weekend from longtime assistant coach Larry Hoefer, who was Kentucky’s safeties coach during the “Bluegrass Miracle.”

“(Hoefer) reminded me that at that next team meeting we had on Sunday, (defensive coordinator) Coach (John) Goodner got up in front of the team and said, ‘Hey guys, it’s not your fault.’ He asked us if we wanted to know whose fault it was,” Sumrall said with a smile. “He pointed over and said, ‘It’s Coach Hoffer’s fault.’ Coach Goodner had a funny way about him.

“He did that to lighten the mood. We all hurt, it stinks but I think maybe having some experience with that helps me understand how to work through it, too. I might tell the team that it’s Coach Hoofer’s fault but I don’t think they’ll know what it means.”

While Sumrall said that he hurts for his players over the ending of the game, the Trojans will look forward with their mantra of “so what, now what?”

“It really hurts the way the game finished,” said Sumrall. “Our players were hurt and they deserve to feel that way because they invested a lot into this to improve and get closer to where we want to be (as a team). They have every right to hurt and I hurt for them.

“Now it’s, ‘So what, now what?’ We lost the game but I can’t change last Saturday and I can’t change this Saturday because it’s a little ways out. All I can do is help our team get better on this Monday, Sept. 19. I’m going to work all day to help our team improve from what we didn’t do well on Saturday to get ready for the game this Saturday. In college football you get 12 regular season opportunities and if you don’t have excitement and passion and enthusiasm about each and every one of those opportunities you should probably do something else.”

“It’s in the past, you can’t change the past and we look forward to playing whoever we play next,” Robertson emphasized. “If we get a chance to see (Appalachian State) again I’ll be excited for it but App State isn’t on my mind and it shouldn’t be on anyone else’s mind right now either.”

“Rich did a great job on the trip (to Appalachian State),” Sumrall said. “Usually when we play home games our guys go out in the community and serve throughout the week. This week with a road trip being a shorter week, Richard on trip did some things to serve in terms of cleaning up at the hotel and the airport and in the locker room.

“KJ battled through an injury and played really well in the game and really fought to be able to play this week.”

Sumrall also gave an update on some injured players going into this week’s game with Marshall, which will air on the NFL Network. Linebacker Carlton Martial and tight end Duyunkrea Lewis missed the Appalachian State game due to a “lower leg” injury. Sumrall said that Martial returning to the lineup is a possibility but Lewis will miss the game again this week and possibly much more.

“I think (Martial) has a really good chance to be available this week but we’ll see how that goes later this week,” he said. “(Lewis) is still out for the foreseeable future. We won’t know officially until Thursday but (doctors) are going to take a deeper look with him and see.

Troy plays Marshall this Saturday at 6 p.m. in a game that will broadcast on the NFL Network.