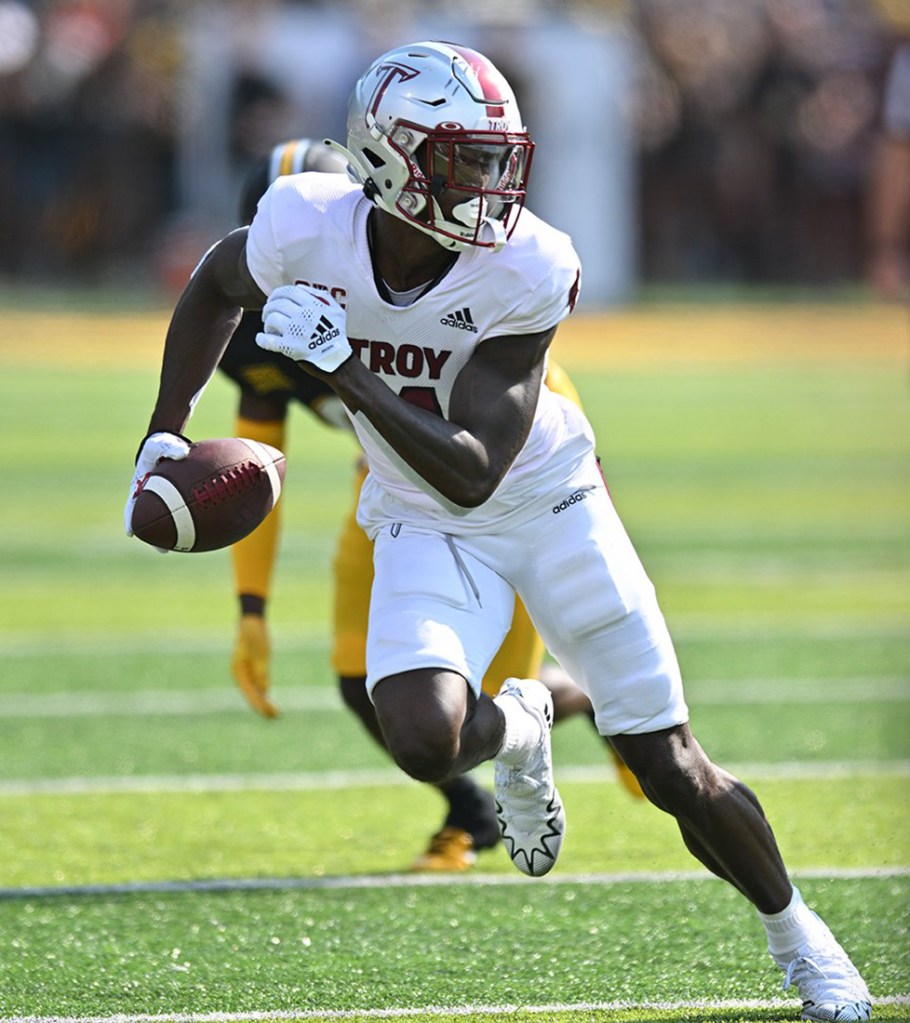 The Troy Trojans dropped an absolute heartbreaker to the Appalachian State Mountaineers on a last-second “Hail Mary” throw.

With Troy leading 28-24 in the fourth quarter, Appalachian State marched on a 17-play drive that ate up 8:57 of game time, converting two fourth downs along the way. The Mountaineers had the ball inside the Troy 3-yard line for another fourth down attempt but the Trojan defense held and took over on downs with just 1:13 left in the game.

Troy ran the clock down to 25 seconds but instead of punting it away on fourth down, the Trojans decided to take a safety instead. With Troy leading 28-26, the Trojans pooched the ensuing kickoff and the Mountaineers got the ball back near midfield with 13 seconds left. With just two seconds left, Mountaineer quarterback Chase Brice heaved a Hail Mary down the field and Troy linebacker KJ Robertson deflected the pass. Appalachian State receiver Christian Horn caught the pass in the air and walked into the end-zone for the game-winning touchdown to give the Mountaineers a 32-28 win in one of the wildest finishes in Sun Belt history.

To open the game, it didn’t take long for Appalachian State to jump on the Trojans. Gunnar Watson overthrew his receiver on the very first play of the game and Mountaineer defensive back Dexter Lawson intercepted the pass in Trojan territory. Just three plays later, the Mountaineers pulled out some trickery as receiver Dashaun Davis took an end-around and heaved a 17-yard touchdown pass to a wide-open Christian Wells to put Appalachian State up 7-0 with 13:48 left in the first quarter.

While things went as poorly for the Trojans as could possibly go to start the game, Troy responded with a 13-play scoring drive capped off by a 19-yard touchdown run from DK Billingsley with 6:49 left in the first quarter to tie the score 7-7. That score was Troy’s first rushing touchdown of the season and the longest run of the year up until that point.

Troy extended the lead to 14-7 on a 1-yard touchdown run by Gunnar Watson with 8:43 left in the second quarter. Appalachian State tied the score 14-14 on an 18-yard touchdown pass from Chase Brice to Anderson Castle with just 1:22 left until halftime.

The Trojans quickly drove into the Appalachian State red-zone and with the ball on the Mountaineer 1-yard line and just three seconds remaining, Troy coach Jon Sumrall opted to go for a touchdown instead of kicking a field goal. Watson bulled his way into the end-zone – after initially being stopped – to give Troy a 21-14 lead going into halftime.

Appalachian State answered right back to start the third quarter when Daetrich Harrington capped off a 9-play scoring drive with a 19-yard run to tie the score 21-21 with 11:35 left in the period. Troy managed to drive inside the Appalachian State 5-yard line but a penalty wiped out a touchdown and the Trojans had to settle for a field goal attempt. Brooks Buce’s 32-yard attempt was wide and the score remained tied 21-21 with just over five minutes left in the third quarter.

Appalachian State took the lead on a 23-yard field goal with 29 seconds left in the third quarter and took that lead into the fourth. Troy answered with a 12-play scoring drive, capped off by a 2-yard touchdown run from Kimani Vidal, his first of the season, to retake a 28-24 lead with 10:10 left in the game.

Troy finished the game with 359 yards of offense but again struggled to run the ball for much of the game, totaling just 57 yards on the ground. Appalachian State rolled up 456 yards of offense themselves. The Trojans were playing without All-American linebacker Carlton Martial.

For Appalachian State, Brice threw for 278 yards and two touchdowns on 22-of-34 passing. Camerun Peoples added 17 carries for 84 yards on the ground. Harrington rushed for 58 yards and a touchdown and Horn caught five passes for 98 yards.

Things won’t get any easier for the Trojans next week as Marshall comes to Veterans Memorial Stadium for a game that will broadcast nationally on the NFL Network.