Troy among best in nation in service to military 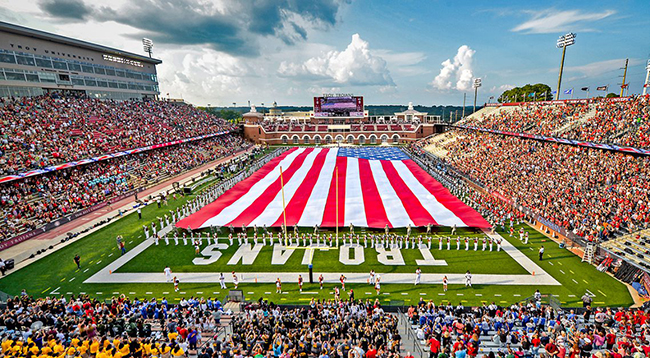 Troy University is the only four-year, public university in Alabama to be named to the 2022 Military Times Best for Vets rankings.

Now in their 11th year, the Military Times “Best for Vets: Colleges” rankings are based on the results of Military Times’ annual survey – the most comprehensive school-by-school assessment of veteran and military student services and rates of academic achievement – as well as a detailed review of public data collected by federal agencies such as the Department of Education and the Department of Veterans Affairs. More than 300 colleges took part in this year’s survey.

Metrics such as completion, retention, persistence and GPA, along with military-specific resources provided and financial assistance offered were considered in the rankings. Admissions and registration policies also were factored into the scoring.

Troy ranked 13th in the southeast among “Best for Vets: Colleges” and 41st in the nation among public colleges and universities.

“For more than 70 years, Troy University has taken great pride in serving and supporting those who sacrifice daily to protect our way of life,” Dr. Jack Hawkins, Jr. “We are committed to setting the standard of service to the men and women who currently wear or have worn the uniform of our Armed Forces. Recognition from organizations such as Military Times serves as validation of our efforts.”

Troy first began serving military students in 1951 through then-Camp Rucker. In 1965, Troy established a teaching center at Maxwell Air Force Base and, in 1974, began establishing teaching sites in Europe through a contract with the U.S. Air Force. Today, nearly 30 percent of Troy student body is made up of students with some affiliation with the military, and the University’s Troy for Troops Center serves as a one-stop shop for military-affiliated student services and support.