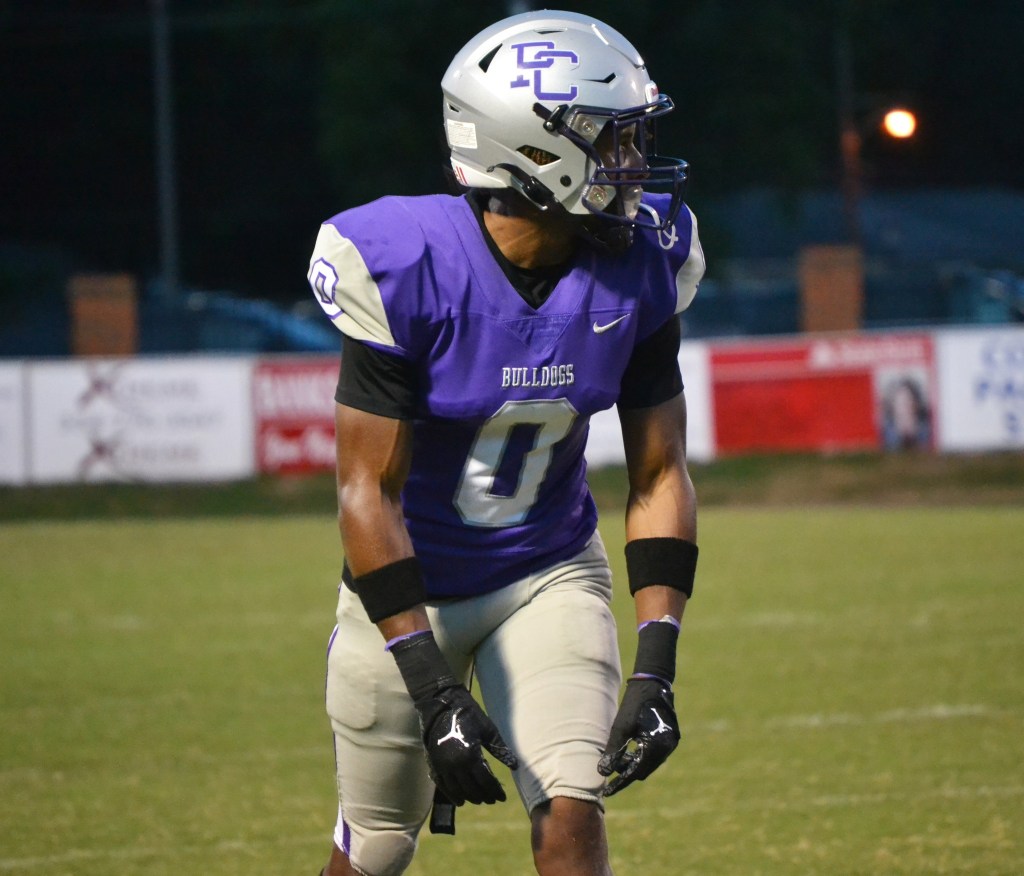 Ian Foster (0) had another big night for Pike County. (Photo by Josh Boutwell)

With the two sides trading haymakers for much of the night, Opp held a 20-15 lead with just under seven minutes to play in the game. Pike County’s Ian Foster then dazzled the Brundidge fans by weaving his way through the Opp defense enroute to a 91-yard touchdown run with 6:26 left in the fourth quarter to put the Bulldogs up 21-20. Pike County attempted a fake PAT to extend the lead to three but Opp wasn’t fooled.

Opp then retook the lead on a 41-yard touchdown pass from Gray Jennings to 6-foot-5-inch receiver Jakanye Mount with just 2:28 left to play. The Bobcats converted the two-point try and extended the Opp lead to 28-21.

With just 17 seconds left in the game, Foster came up big again when he caught a tipped pass at the Opp 5-yard and bulled his way into the end zone – and through two defenders – to cut the lead to 28-27.

With his defense tired – and having just given up a 95-yard scoring drive – PCHS coach Mark Hurt opted to go for a two-point conversion and the win. Pike County quarterback Omari Barrow heaved a jump ball to Foster in the corner of the end zone but an Opp defender managed to get his hand on the ball and deflect the pass. Pike County’s onside kick attempt was recovered by Opp and the Bobcats ran out the remaining 17 seconds to secure the 28-27 win.

In the first quarter, Opp scored first on a 63-yard touchdown run from Jaterrius Davis. A two-point conversion gave the Bobcats an early 8-0 lead. Pike County cut the lead to 8-7 in the second quarter on a 20-yard touchdown pass from Barrow to Foster and a PAT.

Opp extended the lead to 14-7 on a 25-yard touchdown run from Davis and a failed two-point try. Just before halftime, the Bobcats added a 30-yard touchdown pass from Jennings to Mount to take a 20-7 lead into halftime.

The only score in the third quarter came on an 11-yard touchdown run from Pike County’s Nemo Williams on a play in which he drug a pair of Bobcat defenders into the end zone. Williams also converted the two-point try to cut Opp’s lead to 20-15.

Foster led the Bulldog offense with 95 yards and a touchdown on just two rushing attempts along with four catches for 54 yards and two touchdowns. Barrow completed 12-of-16 pass attempts for 126 yards, two touchdowns and two interceptions. Ky’ori McKinnon caught four passes for 40 yards, while Zay Carlisle added 13 carries for 66 yards.

Williams also had a big night for Pike County with 60 yards and a touchdown on 10 rushing attempts along with nine tackles, four tackles-for-loss and three sacks on defense. Foster also had six tackles on the defensive end. Pike County earned five sacks as a defense.