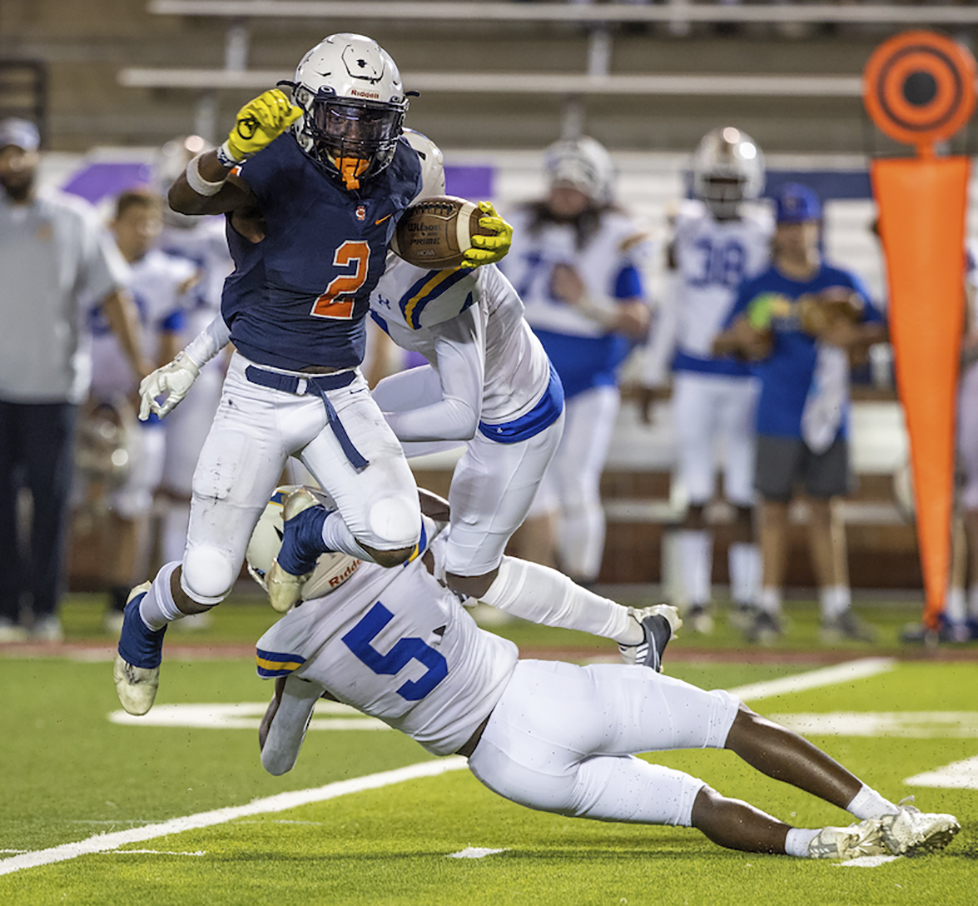 One play should never determine the difference in a win or a loss, and in Charles Henderson High’s 26-24 setback to Beauregard Friday evening, the Trojans will look at a collection of missteps and mental mistakes that led to the first loss of the season for CHHS.

The Trojans led 14-0 in the first quarter, but Beauregard came from behind to take a 15-14 lead, with CHHS going to the locker room at halftime up 17-15.

Beauregard cashed in on those series of Trojan miscues in the second half to take a 26-17 advantage, but CHHS cut that lead to 26-24 with 3:32 to play in the game.

The Hornets faced third and a long five from their own 27 but an offsides call against CHHS gave Beauregard third-and-inches, which they converted for a first down and ran out the clock to seal the win.

“We came out hard and came out fighting, but hats off to Beauregard,” said CHHS Head Coach Quinn Hambrite. “They did play a four-quarter football game, and we played a three-and-one-half quarter football game. If we finish this game, we give ourselves a chance to win. On third and five they catch us offsides, but we played hard nonetheless. I am happy for their effort. The execution was almost there, but we have just got to eliminate the bonehead mistakes. When we do that we will be a great football team. Not just good, but a great football team. We have just got to eliminate those things and not have those mental busts. If you hear anything that I say tonight, it is that we have to eliminate the mental mistakes and those busts.”

The Trojans entered the contest at 3-0 while Beauregard stood at 4-0 in a battle of two Class 5A teams.

Charles Henderson quickly got on the board when on the first offensive play of the game quarterback Parker Adams threw a 75-yard touchdown pass to Jywon Boyd down the right sideline, and the extra point by Nik Peerson was good for a 7-0 lead with 11:45 showing on the clock.

Beauregard started at their own 20 but five plays later Mario Davenport intercepted a pass at the 34 and returned it to the Hornets’ 13-yard line.

It took only four plays for CHHS to score, when junior running back Zach Coleman took it in for a 1-yard TD carry, Peerson converted on the kick and it was 14-0.

The Hornets scored a TD on a six-yard run by quarterback AJ Wallace to make it 14-7 following the extra point.

On their next possession BHS went 73 yards on 11 plays, with Wallace finding receiver Javonn Holman for an 11-yard TD pass play. The Hornets lined up in the extra-point kick formation, but on the snap Jacori Tarver took it in for a two-point conversion and a 15-14 Beauregard lead.

The Trojans regained the lead at 17-15 on a 34-yard field goal by Peerson and carried that into the locker room at the half.

Tarver put Beauregard up 23-17 on an 8-yard touchdown run with 3:13 to go in the third quarter, with the junior running back also going in again for the two-point conversion. The Hornets recovered a CHHS fumble on the next possession and added a field goal to go up 26-17 with 10:38 to play in the game.

CHHS cut the lead to 26-24 when Adams completed a nine-yard touchdown pass to Boyd, and the kick by Peerson was good.

The Trojans could not halt the Hornets on the next series, with Beauregard taking the 26-24 victory.

Wallace completed 7 of 11 passes for 97 yards and a TD, with Tarver gaining 81 yards on 15 carries for two touchdowns to pace the Hornets.

Adams completed 13 of 16 passes for 211 yards and two touchdowns, both to Boyd, while Coleman picked up 70 yards on 16 carries and a TD in unofficial stats.

The Trojans, now 3-1 on the season, have a short week when they return to Troy’s Veterans Memorial Stadium on Thursday night to host St. James of Montgomery.

“They are 3A but they play like a 5A or 6A school,” said Coach Hambrite. “They play up, they play big, they have a Division I quarterback, a nice running back, and some receivers that can burn. We just have to do our job. We can not get in a slump. We have to be resilient through it all. You can not break down and crumble. We have to gel together. We will get it together for sure. I’m looking forward to returning to practice on Sunday, and getting to Thursday.”