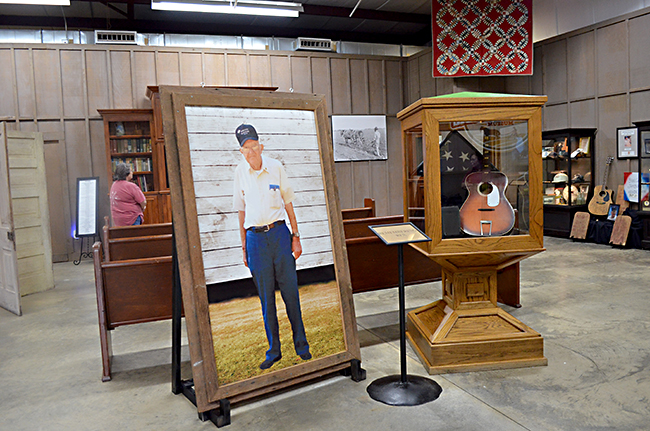 Jaine Treadwell | The Messenger Landmark Park in Dothan hosted the Landmark Park Bluegrass Festival on Saturday, September 10. The park’s Alabama Agriculture Museum payed tribute to the late Rex Locklar, who was, and is, known throughout the Wiregrass as “Mr. Bluegrass.”

“Anyone in the Wiregrass area and beyond who knows anything about bluegrass music, knows about Rex Locklar,” Barley said.

As a special event of the Landmark Park Bluegrass Festival, the park’s Alabama Agriculture Museum payed tribute to the late Rex Locklar, who was, and is, known throughout the Wiregrass as “Mr. Bluegrass.”

Rex Locklar hosted bluegrass festivals in the Henderson community in Pike County for nearly 50 years. Barley said bluegrass pickers came from everywhere bluegrass is played, sung and just enjoyed. They came, also, to be in the company of “Ol’ Rex,” who was a picker and a hotshot buck dancer.

“People from all around the Wiregrass and from as far away as Kansas, Wisconsin and West Virginia came to view the Alabama Agriculture Museum’s “Remember Rex” exhibit that includes his guitar, his Bible, signs from his store in Henderson and items from his service in WWII” Barley said. “Those who knew Rex and remember him and those who attended his Bluegrass festivals in October and April over the many years enjoyed swapping Ole Rex stories and most everybody had a story to share.”

The “Remember Rex” exhibition at the Alabama Agriculture Museum at Dothan’s Landmark Park will close on October 1, 2022.