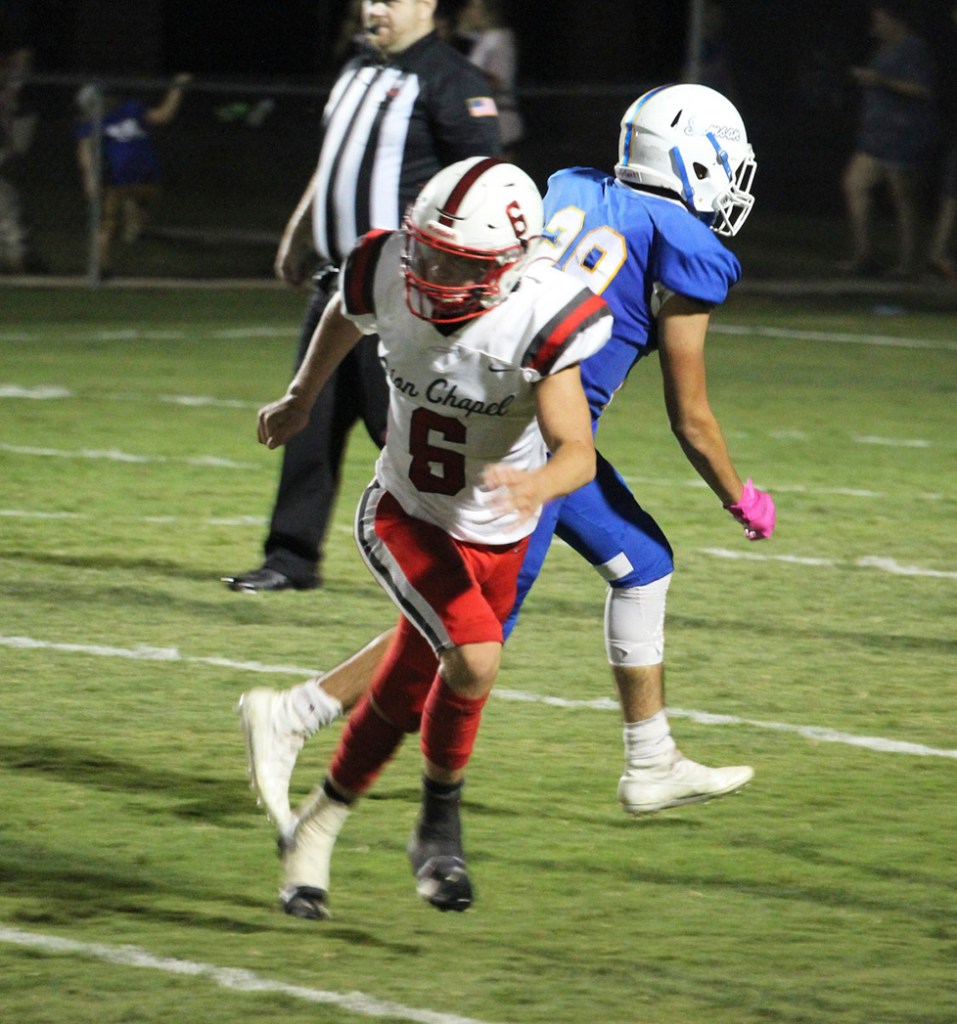 Brayden Benbow (6) had a big night for the Rebels last week. (Photo by Amanda Elrod)

The Rebels are coming off their first win of the season, a 19-6 win over the Samson Tigers, last week. It’s also the first time Zion Chapel has won a game in the month of September since 2019.

Against Samson, senior Morgan Sanders got the start at quarterback after an injury to starter Mason Stuart two weeks ago. Sanders completed 3-of-4 pass attempts for 93 yards and two touchdowns along with rushing for 48 yards and another touchdown. Freshman Brayden Benbow added 69 yards on just two carries, as well. Sophomore receiver Joseph LeGear caught all three passes for 93 yards and two touchdowns in the win. Benbow’s big game didn’t stop on offense as he amassed an eye-popping 17 tackles on defense. The Rebel defense also came down with four interceptions. Junior Jackson Adcock, LeGear, sophomore Micah Fuller and freshman John Hamm all came down with picks in the win.

The road doesn’t get easier for the Rebels this Friday, however, as they face off against the No. 3-ranked Ariton Purple Cats, who are coming off a 34-18 win over GW Long, in a Class 2A, Region 2 game. The Purple Cats have been dominant so far this season, earning resounding wins over Long and Geneva County along with thumping Class 4A’s Dale County by a score of 60-28. The Purple Cats’ only loss of the season came against No. 2 Highland Home by one point.

Zion Chapel trails the all-time series with Ariton 41-12 and hasn’t picked up a win over the Purple Cats since a 31-30 win in 2014. Ariton currently holds a five-game winning streak against the Rebels. 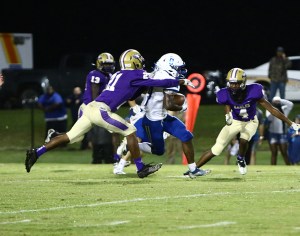 Jabauri Williams (21) and the Goshen Eagles look to rebound this week against LaFayette. (Photo by April Brown/ABC Photography)

Meanwhile, Goshen is coming off a frustrating 42-22 loss to Reeltown, which saw the Eagles lead at halftime before Reeltown took over. Goshen will try to get back on track this week against the LaFayette Bulldogs (1-3, 1-1) in a Class 2A, Region 3 game.

The Eagles will make the two-hour trek northeast to LaFayette in one of two long road trips for Goshen during the regular season. Last week, LaFayette picked up a dominating 72-6 win over Barbour County after losing three consecutive games to start the season. LaFayette lost 38-6 to Loachapoka, 30-21 to Bullock County and 41-0 to Reeltown. This will be the first time Goshen and LaFayette have ever played one another.

Last week against Reeltown, Goshen quarterback Peyton Stamey threw for a season-high 152 yards with receiver Tyler McLendon coming down with four catches for 161 yards and a touchdown. Running back Jamari McClure rushed for 109 yards and a touchdown, his third 100-yard rushing game of the season. Leon Cowart led the Goshen defense with nine tackles, three tackles-for-loss and two sacks.

Goshen and LaFayette will kickoff at 7 p.m. at Bulldog Stadium in LaFayette.