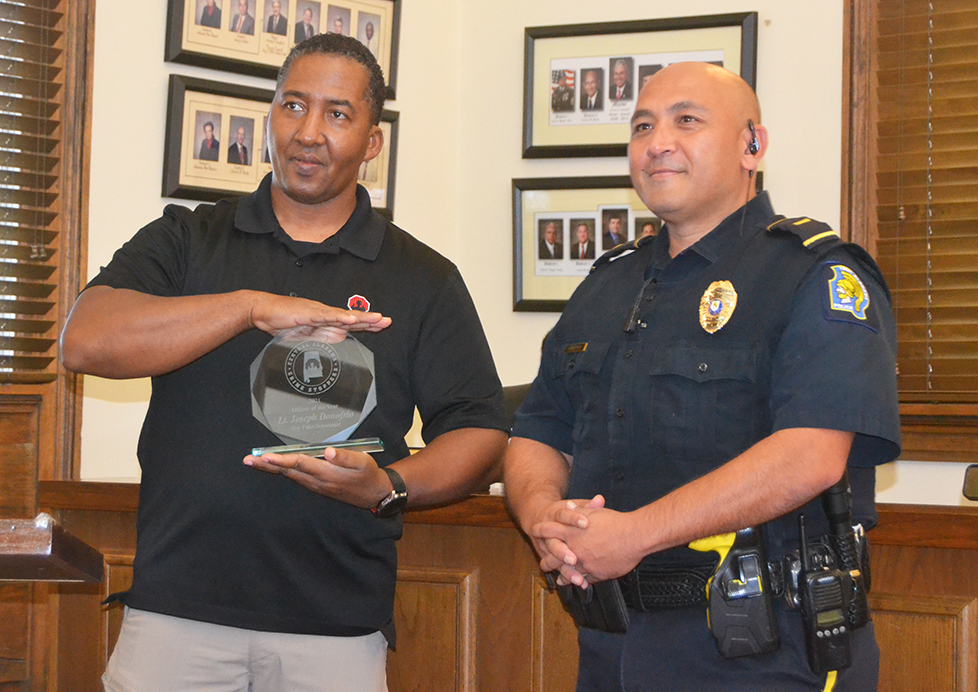 Donofrio was awarded with special recognition at the council meeting along with a trophy and gift back from Central Alabama CrimeStoppers. Troy Police Chief Randall Barr described an incident that Donofrio responded to on Aug. 30, 2020, in his recommendation for the award.

“Officers responded to a report of shots fired in the City of Troy. While in route to the call of shots fired, officers were advised that a blue Mercury Marquis was chasing a grey Ford Fusion,” Barr’s recommendation stated. “The caller was hysterical and disconnected with dispatch several times. Lt. Joseph Donofrio observed the two cars pass by the police department at a high rate of speed.

“Lt. Donofrio immediately attempted to catch up to the cars. Both cars made the block around the police department then pulled into the parking lot of the police department, where two females quickly exited the Ford Fusion and ran toward the entrance of the police department. Before the female in the back seat could exit, the driver of the Grand Marquis rammed the back end of the Fusion. The driver of the Grand Marquis exited the car armed with a handgun and approached the back door of the Fusion where a female was still inside the car. The male opened the door and pointed the handgun at the female occupant and fired a single round at her. The female held her hand up as the weapon was fired and was struck in the hand. Lt. Donofrio arrived behind the cars and confronted the male who was still armed with the handgun. Lt. Donofrio began giving commands for the male to drop the gun and he complied. Thanks to the quick response, bravery and selfless actions of LT. Joseph Donofrio, the female’s life was saved. The male was taken into custody without further incident.”

“I still remember reading the letter of recommendation for (Donofrio),” Reeves recalled. “I can say it was one of the best letters I have ever read and he has certainly lived up to that. I appreciate so much everything you – and everyone else that puts their life on the line – do for our city.”