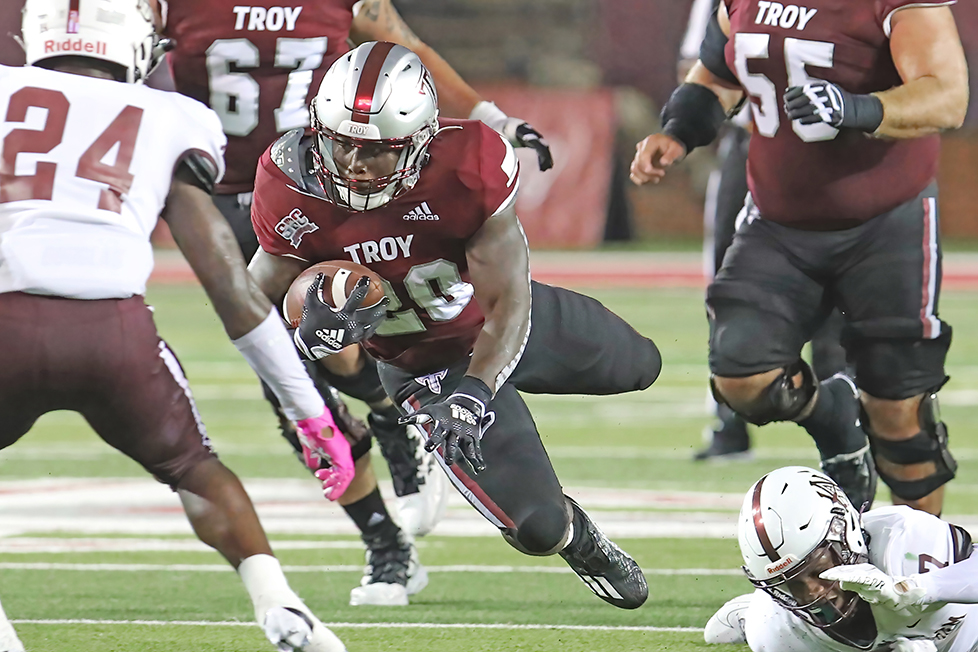 DK Billingsley (20) dives for a first down against Alabama A&M. (Photo by Henry Otto/Creative Media Images)

The Troy Trojans (1-1) picked up their first win under new head coach Jon Sumrall at home on Saturday night against the Alabama A&M Bulldogs (0-2) at home 38-17.

While Troy would eventually get things rolling and put up more than 500 yards of offense, things didn’t start out that way with the Trojans heading into the second quarter trailing 3-0. In fact, Troy didn’t find the end-zone until the final 40 seconds of the first half.

“I never will appoligize for a win but it was not maybe the way we wanted to happen in appearance and how clean we played,” Sumrall said after the game. “We were frustrated in spurts in the first half and in the fourth quarter when we rolled some more defensive guys in there and got sloppy and loose again.

“I’m glad to see our guys get a win but we have a long way to go as a football team, a long way. I can promise you this, though, I told (sideline reporter) Chris Blackshear going into halftime, ‘I’m going to get it fixed.’ I will personally get it fixed. When we don’t play well its on me and we didn’t play well. I have to respond and help our team prepare to start faster.”

The first quarter was directly the opposite of the type of game the Trojans were hoping for, struggling throughout the half on both sides of the ball, but especially on offense. Alabama A&M managed to drive inside the Troy 15-yard line with 8:00 left in the opening period before Troy’s Taiyon Palmer intercepted a Bulldog pass.

Alabama A&M drove into Troy territory again after a 47-yard catch from Keenan Hambrick from quarterback Xavier Lankford. The Bulldogs booted a 47-yard field goal with under 5:00 left in the first quarter and took the 3-0 lead into the second quarter. 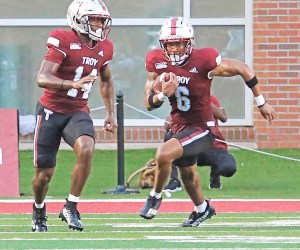 After netting just a total of 28 yards in its first four drives of the game, the Trojan offense began to wake up, driving inside the Alabama A&M 15-yard line. On third down, however, Gunnar Watson was sacked and fumbled giving the Bulldogs the ball back. Troy again drove inside the 15-yard line but this time a bad snap on a field goal attempt snuffed out another scoring opportunity. Troy’s starting long snapper Quentin Skinner was unable to play against Alabama A&M.

From the second quarter through the third quarter, the Trojans outgained Alabama A&M 367-76 in yardage and scored 28 unanswered points during that stretch.

Buce booted a 30-yard field goal to open the fourth quarter and extend Troy’s lead to 31-3. Western Kentucky transfer quarterback Jarret Doege entered the game and threw his first touchdown as a Trojan to Peyton Higgins on a 39-yard screen pass to extend the lead to 38-3. The Bulldogs managed to add two touchdowns late.

The Troy offense totaled 529 yards against Alabama A&M, while the Bulldogs managed to earn 359 yards of offense.

During the third quarter, everyone in the stadium had to take a deep breath as the heart and soul of Troy’s defense, Carlton Martial, lay on the field injured. Martial didn’t return the game but stayed on the sideline with his teammates.

“It was a little bit of a lower body deal,” Sumrall said of the injury. “Not quite sure if it was a hamstring or glute but I really couldn’t tell. I thought he got hit from behind but maybe he just got stepped on in pursuit on a screen play.

“He’s a tough dude, he tried to come back in but we’ll see. With him out and KJ (Robertson) out, Jayden (McDonald) stepped up big starting at MIKE (linebacker) tonight. We have some good experience at linebacker but we’re getting a little bit thinner than I’d like us to be.”
Robertson missed the game after spraining his ankle during practice this week but Sumrall said he believed the injury would be a short-term one. With both of those star linebackers out, both McDonald and Terry Thomas stepped up. McDonald earned six tackles and two quarterback hurries, while Thomas earned his first career interception.

“We have two great players out right now, so I know it’s up to me to step up and be that guy to motivate the defense and get us ready to play,” McDonald said. “I have to step up and we have to have that ‘next man up’ mentality and just work everyday.”

After already playing No. 21 Ole Miss this season, the schedule won’t get any easier these next two weeks. Troy’s opponent next is Appalachian State, who knocked off No. 6 Texas A&M on Saturday. The following week, Troy will face Marshall who is coming off a win over No. 8 Notre Dame this week, as well.

“We got our backs against the wall in a couple of games so far this season and didn’t quit. We’re getting ready to take on a stretch of opponents the next couple of weeks that we can’t start slow against,” Sumrall said. “We have to start fast, we can’t waste a second if we want to have a chance to win those games.”