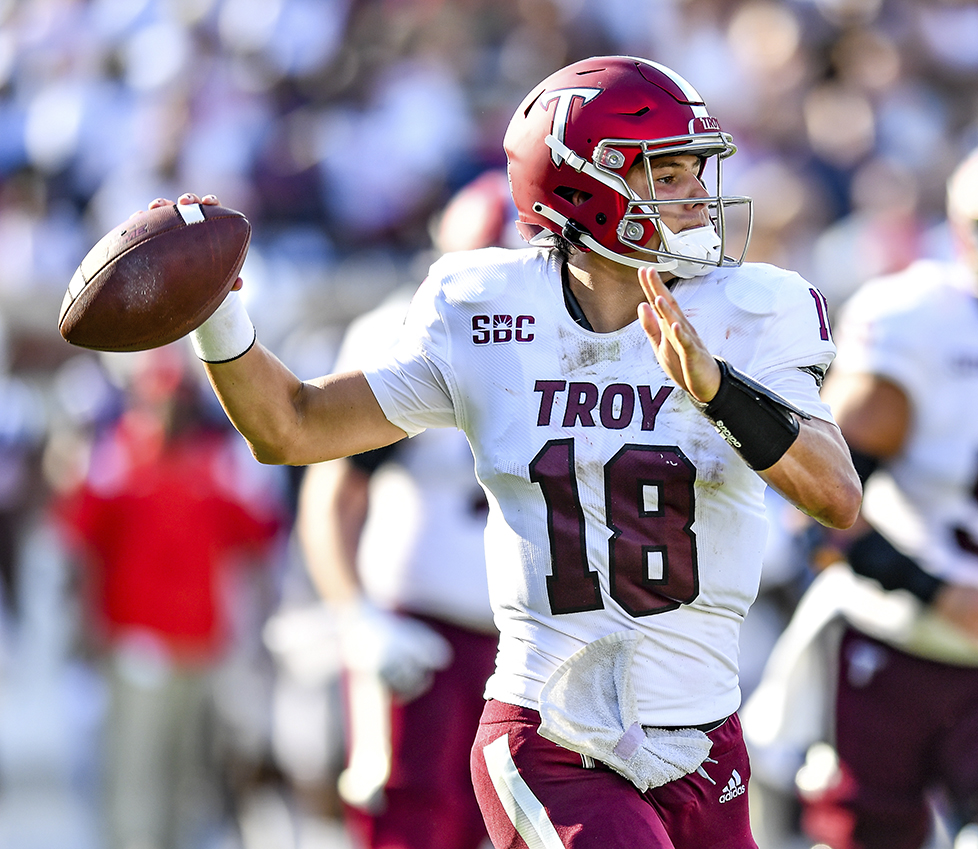 Gunnar Watson (18) will get his second start of the season against Alabama A&M. (Photo courtesy of Troy University Athletics)

The Trojans are coming off a frustrating 28-10 loss to No. 21-ranked Ole Miss last week, Alabama A&M lost to UAB 59-0 a week ago. Despite the frustrating outcome for Troy, the Trojan defense forced three turnovers and held the Rebels to just 165 yards and seven points in the second half. Troy quarterback Gunnar Watson threw for 275 yards and a touchdown, while Kimani Vidal rushed for 48 yards.

Meanwhile, Alabama A&M totaled 235 yards of offense against UAB and gave up four turnovers. Quarterback Xavier Lankford completed 12-of-22 pass attempts for 115 yards and an interception, while Quincy Casey completed 4-of-11 passes for 22 yards and two interceptions. Lankford also rushed or 44 yards. The Alabama A&M defense gave up 478 yards to UAB and allowed 28 points in the first quarter.

Troy coach Jon Sumrall is excited for his first time on the sidelines at “The Vet” as a head coach.

“We’re excited about getting to play in front of our fans and in our stadium against a good football team,” Sumrall said. “They won seven games last year and their last four of the season. The roster is scattered with players who have been at Power Five programs.”

Sumrall also has a personal connection to his first home opponent having grown up in Huntsville where Alabama A&M is located.

“I grew up running the stadium steps at their stadium as a high school kid,” Sumrall recalled. “I have a lot of respect for that program. I’m a football junkie and John Stallworth played at A&M. Robert Mathis also played there and I watched him play there.

“I idolized some of the guys that played at Alabama A&M. It’s a really great historic program and for me to be able to in back-to-back weeks coach against a school I coached at in week one (Ole Miss) and week two play a game against my hometown team where I grew up is a fun opportunity and a fun experience.”

Troy will hold the Trojan Walk at 3:45 p.m. on Saturday and gates open to Veteran’s Memorial Stadium at 4:30 p.m., while kickoff is set for 6 p.m. The game will stream online on ESPN3, as well.