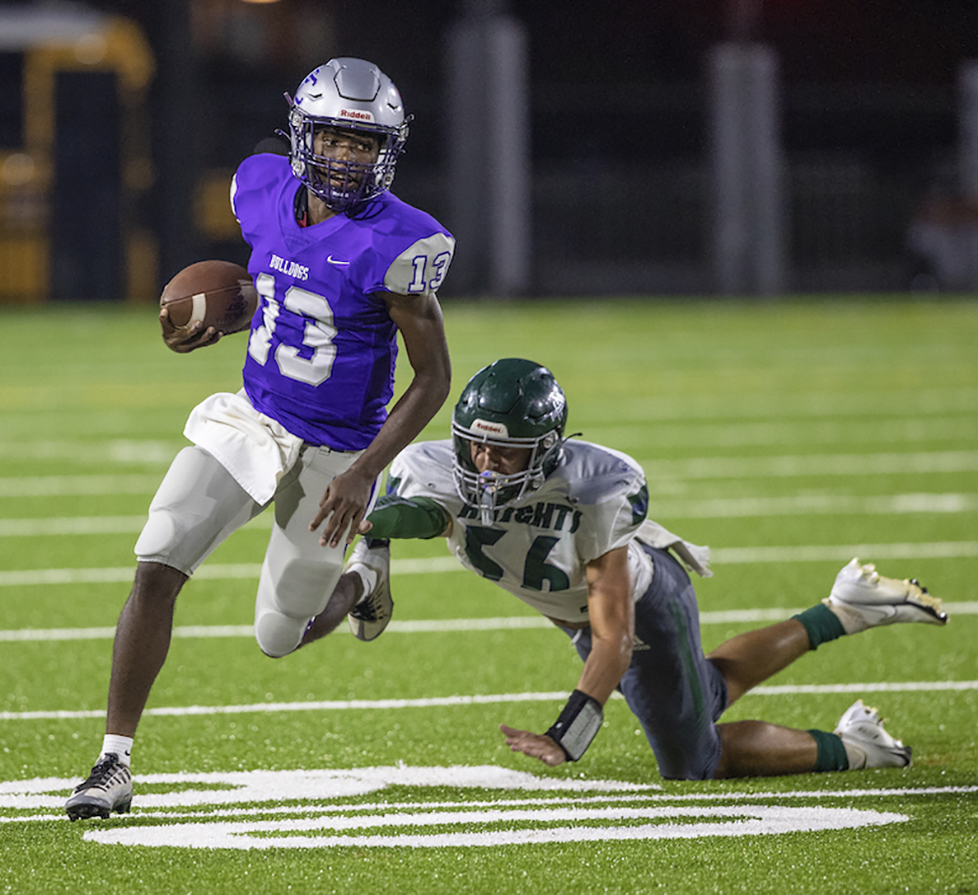 DOTHAN – Road victories are always the toughest, and Pike County High had to fight four quarters before coming away with a 28-18 win over the Northside Methodist Academy Knights Friday evening in Dothan’s Rip Hewes Stadium.

Improving to 2-1 on the season and also 2-1 in the Class 3A, Region 2 standings, the Bulldogs now set their sights on a big home game next Friday in Brundidge against the Opp Bobcats. Head Coach Mark Hurt was pleased with his Bulldogs’ effort but knows there are areas they can improve.

“It was like a playoff victory,” said Coach Hurt. “We traveled on the road and had a lot of penalties called against us, but we fought through and showed some toughness. I think we are doing well, we just have got to get a little tighter on discipline with penalties, and that is what we are going to work on next week. We play Opp at home next Friday, and that is going to be a big game. We did what we had to do tonight, and I’m proud of the kids and they played great.”

Northside jumped out to a quick 6-0 lead Friday against Pike County High when quarterback Harrison Hicks found Colin Blackwell on the right side, and Blackwell took it 49 yards for the touchdown. The extra point was blocked, and the Knights led 6-0 with 10:13 to go in the first quarter.

The Bulldogs took the lead at 7-6 with 1:06 remaining in the second quarter as Nemo Williams bulled his way down the left side for a 24-yard touchdown carry. The extra point by Arturo Perez-Hernandez was good for the 7-6 halftime score.

Pike County went up 14-6 on their first possession of the third quarter as Zay Carlisle sprinted up the middle 24 yards and the TD, Perez-Hernandez kicked and it was 14-6 with 9:08 in the third.

Two touchdown passes during that possession from PCHS quarterback Omari Barrow to Ian Foster were called back due to penalties, with Northside eventually taking over at their 12.

The Bulldogs then blocked the Northside punt on fourth down, and on first-and-five Carlisle fought his way in for another TD, the kick was good, and it was 21-6 with 2:47 left in the third.

The Knights took only 30 seconds to score a touchdown, when Hicks completed a pass for a 57-yard strike, the try for two failed, and it was 21-12.

PCHS extended its lead to 28-12 on a Barrow completion to Braylon Jackson that covered 32 yards, with the kick being successful.

Northside added its final touchdown with 8:15 left in the contest when Hicks found Jesse Dyson for a 5-yard touchdown completion, and again the try for two was unsuccessful, and the final was 28-18.