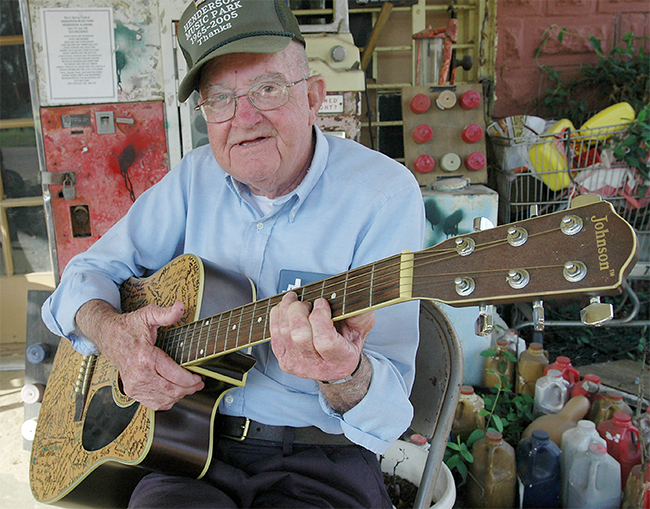 An exhibit in tribute to the late Rex Locklar, Pike County’s Mr. Bluegrass, will be a featured opportunity of the Landmark Park Bluegrass Festival in Dothan from 9 a.m. until 9 p.m. Saturday.

“Ol’ Rex,” as he was affectionately known, hosted bluegrass festivals in the Henderson Community for nearly 50 years. Each October and April, bluegrass pickers and grinners converged on the usually sleepy community of Henderson to play bluegrass and to be in the company of Mr. Bluegrass. It was often said that those who came to the Henderson Bluegrass Festivals loved Rex Locklar, as much as they loved picking and singing.

A stretch of Pike County highway between the communities of Henderson and Springhill is named the “Rex Locklar Bluegrass Highway” in memory of Locklar and in tribute to the music he loved.

“In the bluegrass world, if you say Rex Locklar’s name, no matter what part of the country, someone is going to know it,” Barley said. “Rex Locklar is a bluegrass legend. He put Henderson, Alabama, on the map. Many people that are now famous got their starts in at the Henderson Bluegrass Festival.

“Music runs deep in the Locklar family and we appreciate the opportunity to be able to honor Rex’s memory.”

The exhibit honoring Rex Locklar, will be open from 9 a.m. until 5 p.m. Saturday at the Bluegrass Festival. The exhibit will remain

in the Agricultural Museum for a month. The museum hours are Wednesday through Saturday from 10 a.m. until 4 p.m. and Sundays from 1 until 4 p.m.

The main stage bands will be Blue Holler, Another Town, The Byrd Family and the Amanda Cook Band.